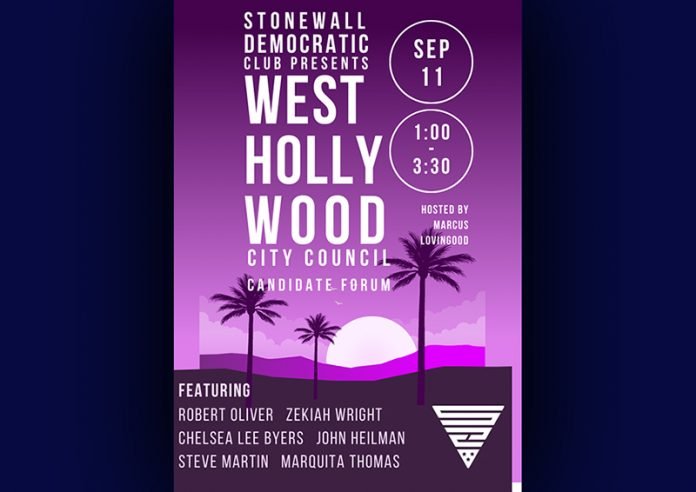 The Stonewall Democratic Club, the nation’s oldest LGBTQ+ Democratic political advocacy organization, will be hosting a City Council Candidate Forum where they will consider six candidates running for City Council of West Hollywood on September 11th from 1 to 3:30 pm.

The event will be held in a hybrid online and in-person format in a Zoom meeting as well as a simulcast from the Stonewall YouTube Channel and Facebook Page.

Moderating the forum will be the executive producer of the Stonewall Spotlight podcast Marcus Lovingood. Lovingood is also the Artistic Director of Broadway West.

The candidates will discuss their plans for the nearly 40,000 residents of the City of West Hollywood, considered a mecca of the LGBTQ+ community, as the country faces a slew of existential crises, like threats to reproductive rights, marriage equality, homelessness, and the climate crisis.

In-person attendance will be limited to candidate staff, selected guests, and the press. Prior to entering the facility, all attendees, volunteers, staff, and candidates must provide proof of immunization against COVID-19 and must wear masks while inside the facility at all times unless appearing on stage.

For more information about the Stonewall Democrats, please visit www.stonewalldems.org.

ABOUT STONEWALL
Since their founding in Los Angeles in 1975, Stonewall Democratic Club has been the home for progressive Democrats who are lesbian, gay, bisexual, transgender, and straight allies of the LGBT community. They are the first “Stonewall Democratic Club” in the country established for gay, lesbian, bisexual, and transgender individuals and our straight allies committed to achieving equality for all and to advancing progressive and feminist values through the Democratic Party. Stonewall is an all-volunteer grassroots non-profit political organization and is among the largest Democratic Clubs in California.

Stonewall is chartered in Los Angeles County. They endorse in races across the Greater Los Angeles Metropolitan Area and across the state and country when the LGBTQ+ community is a vested stakeholder. Stonewall membership is open to all Democrats, regardless of sexual orientation or gender identity. They are actively involved in all levels of the political process: local, state and federal.

“Robert” Heilman on their graphic. Whoops

…and it’s supposed to be “Stephen” Martin.
How embarrassinggggggg