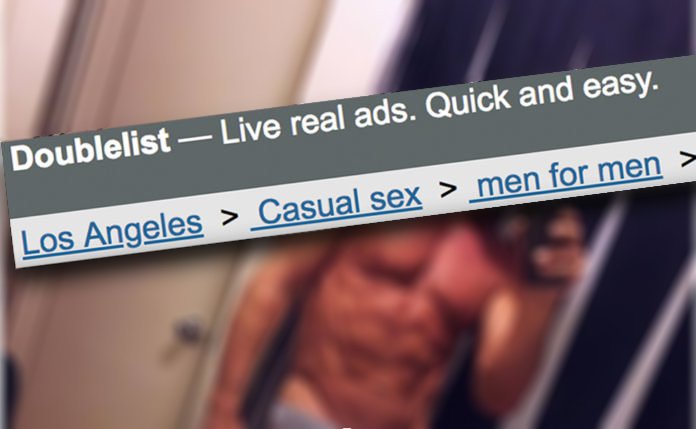 Doublelist (doublelist.com), the new online personals website dares to fill the void Craigslist left when it shut down their legendary Craigslist personal ads back in March.

The Craigslist shutdown was a result of the passing of a bill known as FOSTA (Fight Online Sex Trafficking Act of 2017), by The House of Representatives. The bill places legal responsibility for sex-work interactions and other illegal sexual activity at the risk of the platform holders, rather than individual users. FOSTA became law and Craigslist became nervous. The classified advertisements website did not want to assume any legal risk, so they pulled the plug on their pages for men-seeking-men, women-seeking-women, etc, and basically snuffed out an entire online culture where straight, gay and everything in between liked to convene. It appeared to be the end of an era, and the way a community engaged and connected with likeminded people in a platform outside of hookup apps like Grinder, Scruff and Tinder that rely heavily on a profile picture.

One day, guys woke up to see if their neighborhood glory hole was open for service, but what they got instead was the following message:

The demise of the CL personals paved the way for the birth Doublelist. DL offers live real ads, quick and easy, very much like most of its users. According to their mission statement DL’s goal is to provide a safe community where users can learn, explore, enhance their sexual side, share new experiences with likeminded users or simply connect with one another and share advice. The website is growing, thanks to word of mouth very much like Craigslist grew when it began back in 1995. And like CL, DL keeps it simple. The sexual language tends to be familiar, but gone are the happy ending massages and the endless ads looking for Mr. Generou$$$. The site also encourages flagging suspicious ads and tries to be swift about removing anyone who tries to sell sex on the sly.

Despite its rigorous monitoring of the site, administrators are not without their challenges: “Due to the recent shutdown of some sites, we have been experiencing an influx of illegal posters on the site,” reads a notice on the home page. “As these posters are trying to find a new place to post, we are working hard 24-7 to permanently remove and block them.”

WEHO TIMES reached out to DL to learn more about their platform. We were asked to submit a list of questions, which an unnamed source from their DL media team answered in a timely fashion.

What inspired Doublelist?
Doublelist was initially created to be a small site. It was meant to be a temporary solution to fill a void brought on by other sites. We wanted to create a safe place where people could still post, have fun, and connect with each other. We were inspired by the community.

Are you able to name the founding parties responsible for the launch of this site?All we can say is that they are the most hard-working, community oriented and responsible people. The team works around the clock, 24-7, without getting paid. Many of them are passionate people that give out their free time, guidance and expertise to improve the site.

When did it launch?
It launched in March.

What is your mission by providing this service?
The mission is to provide a safe place where people can connect and express their sexuality without being judged for their appearance or their sexual orientation. We want to provide an environment that fosters open communication and advances tolerance.

Craigslist doesn’t want to risk criminal and civil liability when third parties misuse online personals, how does Doublelist handle this threat?
We understand. We really can’t blame other websites for not wanting to deal with this.
From what our extensive legal team has outlined, it really comes down to a matter of intent and not turning a blind eye to illegal activities. Ultimately, users can try to abuse any site. We make it known by no uncertain terms that we simply won’t tolerate any illegal activity on our site. We proactively remove and ban any users that misuses the service or attempt to engage in illegal activities on our site. We act quickly, and both review uploaded content and remove content from all offending users. We have already seen a major drop in incoming misuse as most people know now that we will not just sit there and watch the service be misused.

How do you monitor any misuse of the site?
We employ a plethora of techniques including manual human reviews and content analysis by machine learning. Both proactively and retroactively. We also allow the community to flag and report any misuse. In which case we remove the offending content and look into the user that posted it. We also make sure that user feedback is placed at the most important level. We investigate all incoming complaints of misuse and very quickly address them. We tend to err on the safe side. Sadly, sometimes well meaning users get caught in the filters. It’s sometimes difficult to determine user intent from a 50 word ad. But we think we’re doing a pretty good job at it. The most exciting part is that other companies are offering to help out. We’re about to bring on board a top notch AI company that specializes in content analysis. That will open whole new levels in safety & satisfaction. Don’t even ask us what we do to spammers 🙂

What has been your growth like since you first launched it?
Growth has been rapid and overwhelming. We don’t advertise so its been mostly word of mouth. We hope its because we’ve been providing a good experience.

How many users would you say know about your site and visit it?
Hard to say how many people know about it, but we currently get around 130k visitors a day.

What kind of feedback that you’re getting about the new site?
Joy, relief, happiness, and inevitably user frustration. What’s really gratifying to us are the emails of gratitude we get from people. Many people simply write to say “Thank you for this.”. Others write that they want to help. Many offer to donate to the cause. Getting these emails really makes the long hours that much easier. We also occasionally get emails from frustrated users. Most of the frustration is because the user ads got rejected. Most of the time it happens by mistake, but sometimes it happens on purpose. Its never personal. But some users take it that way.

Have there been some challenges you didn’t anticipate?
Server failures, frustrated users, spammers, sleepless nights. Nothing we can’t handle though.

Are there elements to launching the site that are gratifying, or pleasantly surprising? User feedback and satisfaction is really gratifying. Most users are shocked when we reply back to them, let alone solve their complaint in minutes. Seeing the community grow so quickly is another very pleasant experience. It shows us that we’re on the right track.

What do you see in the future of doublelist.com?
Site design and improvement are in the very near future. We want to keep the functionality while giving it a bold face. New categories. New cities. Better content review processes. Perhaps a slight shift in the model itself. We’re also working to learn more about the needs of our users. The difference between the Men seeking Men and Couples seeking Women for example is quite big. We’d like to customize the experience to be more suited for each of the users. At the end of the day we listen to the community needs.

CSW/LA Pride Board Apologizes for Missteps Taken and Says it is Collaborating with Black Groups to Reevaluate Solidarity March, June 14

help says to contact support i dont see a phone number to do that, wants my phone number but says in red that the number is already with this account how do i get help

You can get a temporary number at http://textita.com to do the phone verification

I don’t know about DoubleList, but if your in the Las Vegas area you should try out https://SundayMolly.com

My account has been -placed on hold for how long and specifically why?

This site is a piece of crap. I tried to register but they wouldn’t allow my landline number to be used to verify. WTF dumb ass made that rule????? That is about as fucking stupid as it gets because I choose to use a landline instead of a stupid cell phone. Tech people are getting more and more ignorant by the day and Doublelist is just another scammer and spam site. Doublelist is as bad as Craigslist if not worse….AVOID DOUBLELIST!!!!!!!!!!

Just out of curiosity do you still feel this way. Double list is great, maybe not as great as CL but it’s the best we have now.

Well I sure as hell hope so.

Doublelist is an absolute waste of time. I tried posting three different times and each time, it was immediately flagged and never appeared. I read their many, many overzealous guidelines beforehand, so I wasn’t surprised when my first risque post didn’t make the cut. But I was careful with the next two attempts. The third post was completely innocuous, yet even it got rejected (or flagged) I assume by a poorly written algorithm used to accept or reject posts on the fly. The joke is as careful as I was trying to construct something tame enough for their sensitive nature,… Read more »

These people have the absolute worse website I have EVER been on. Completely broken. The so called security functions they have do nothing but ban people for nothing at all. I created an account, only logged in at most half a dozen times and only browsed the ads. Never once did I post, reply to an ad, or in any way do any thing to DL or its users. I simply read the ads. BANNED. I HAVE SEARCHED EVERY WHERE for an email or phone number to contact them but to no avail. Nothing but redirected to a page to… Read more »

Same has happened to me. I didn’t know that there was a maximum of texts tou can send. I am single and I want to have a good time what is wrong with that?

Where ya from, Cindy? Maybe we can have many great times together?, that’s if your real and a female!? I’m single, male, straight, educated, hilarious and I’ve always liked the name Cindy, as it has always sounded so cute, yet so naughty at the same time!

Cindy is fake… like the others. That’s why she was banned from DL. Sending out large amounts of spam to other DL users.

Nothing at all but I’ve been around long enough to know how much our government is interested in keeping us from having a good time.

CSW/LA Pride Board Apologizes for Missteps Taken and Says it is...

ABOUT US
Our goal is to offer readers different perspectives and more ways to celebrate the lifestyle that is West Hollywood. Stories on everything from WeHo News, Politics, Opinions & Gay LA to the hottest new restaurants, bars and clubs along with reviews, sightings, gossip and tips on great happy hours, sales and design.
Contact us: editor@wehotimes.com
FOLLOW US
© 2020 Murillo Media, LLC
wpDiscuz
15
0
Would love your thoughts, please comment.x
()
x
| Reply