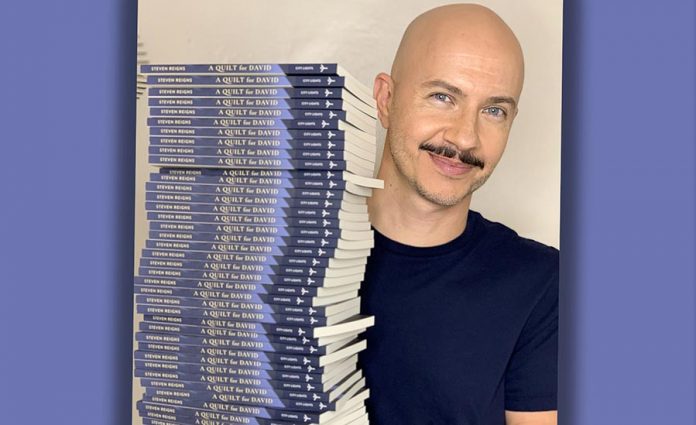 A Quilt for David, a book by West Hollywood poet Steven Reigns, was the subject of a 3-part radio series on This Way Out Radio. The producers of this international radio program selected the series as their submission for The Association of LGBTQ Journalists’ (NLGJA) Excellence in Radio Award. The prestigious radio award “recognizes outstanding audio produced for radio distribution.”

The brainchild of the audio interpretation was Brian DeShazor, a Los Angeles award-winning radio broadcaster and CEO of Overnight Productions (inc.), the parent organization of This Way Out. DeShazor explains his inspiration for the ambitious project, “When I heard Steven read from the book at the L.A. launch party, I was moved to tears and angered at the injustice done to David Acer. I wanted to bring the story and that emotion to the radio airwaves.”

The book centers around an incident in the early 90’s where 8 people accused their dentist of infecting them with HIV. Instead of a traditional author interview, DeShazor wanted listeners to inhabit the poems and the story. “I wanted to give listeners an immersive experience, sculpting the various elements into a sound collage that moves the listener forward through the story of book and Reigns’ investigative journey.”

DeShazor achieved this by locating and utilizing historic newscasts to illuminate the subject and put the poetry in context of the time the events took place. This was mixed with live recordings from Reigns reading from the collection at the numerous events done to promote the book. DeShazor “I started with the live recordings because they have an energy you can’t get in a studio and they were the poems the author selected so that work was done for me. There is one poem that I requested Reigns to record alone in his house to fit the interior mood of that closing poem.”

Reigns, the first Poet Laureate of West Hollywood, was pleased with the final product, “The urgency I felt researching and writing this book come through in these radio segments. Brian really captured the feel and complexity of the book. I felt fortunate Brian took on the labor intensive radio archival work to create these segments. This Way Out has hundreds of hours of great programming they could have selected. It’s so thrilling the series created from my book is being nominated that it already feels like a win.”

“I have so much respect for NLGJA and love that this series might be their introduction to my work and the story of David Acer,” he added.

A Quilt for David, published by City Lights, is a collection of prose and poetry surrounding the accusations of 8 people who claimed their dentist infected them with HIV. Reigns spent 10 years researching and writing the collection to discover what really happened.

This Way Out Radio has been around since 1988 and can be heard weekly in over 200 markets. It was also recognized by The City of West Hollywood in 2018 for the show’s 30th Anniversary.

To listen to the recordings, please go to: https://www.stevenreigns.com/appearances/2022/1/11/3-part-radio-segment-on-this-way-out

This Way Out is a non-profit that accepts donations: https://www.thiswayout.org/