Welcome to the neighborhood. Stache restaurant, bar, and nightclub had a super soft mock opening yesterday for friends and family as a test run in preparation for a grand opening early next month. The restaurant located at 8941 Santa Monica Blvd will have its official soft opening on Wednesday, September 1st for limited dinner hours, and then officially open regular hours from noon to 2am on Wednesday, September 8th.

“I feel great to finally be open,” owner Ryan Floyd told WEHO TIMES. “COVID has been the hardest thing about opening in the past twelve months. We signed in December of 2019. We pulled the permits about two weeks before COVID hit. Everything was put on pause. We had to get a new conditional use permit. We had to wait to have the neighborhood meetings. We did it all via ZOOM. We officially started building in March of 2021.” 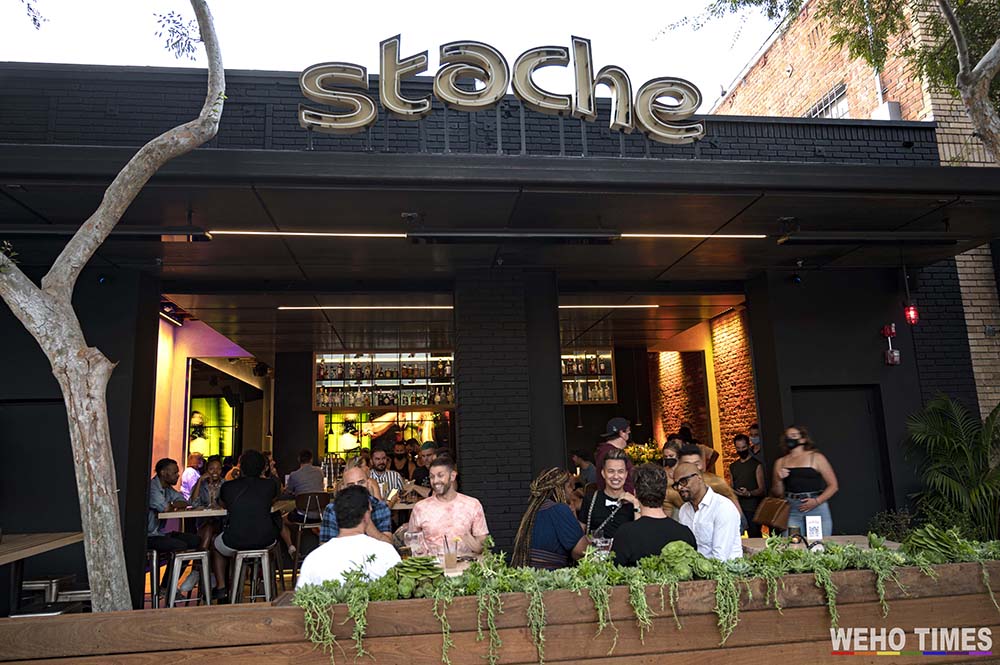 The restaurant is currently playing it by ear and may accommodate walk-ins depending on capacity. “I just want to make sure that when people come in, they have a great experience,” Floyd added. “We’re also a night club, so I think people are really going to love the live programing we plan to bring to this space. We hope to do a grand opening party some time in late September, early October.” 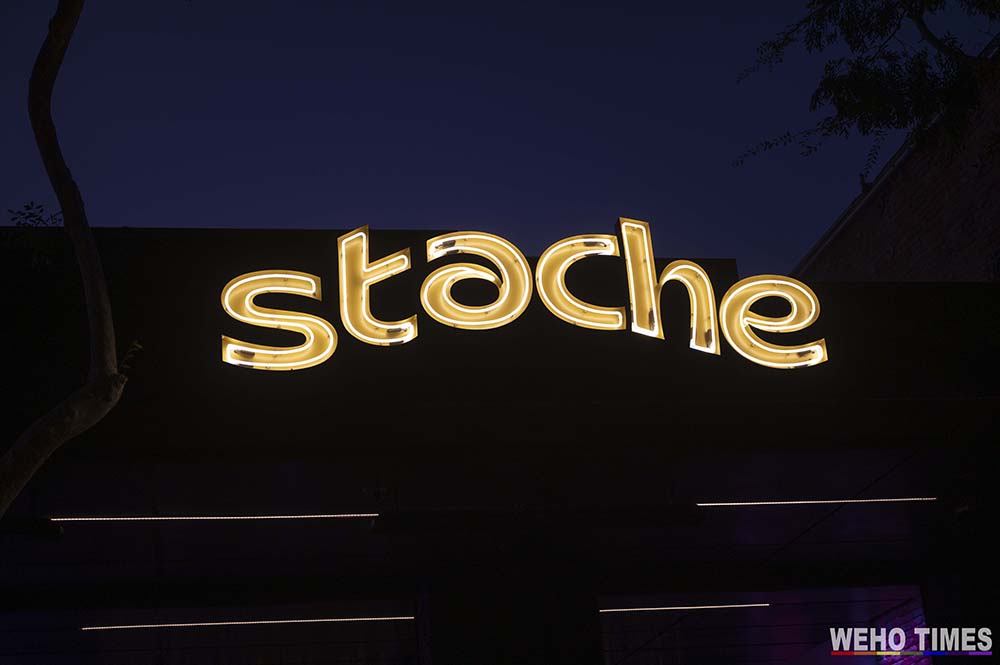 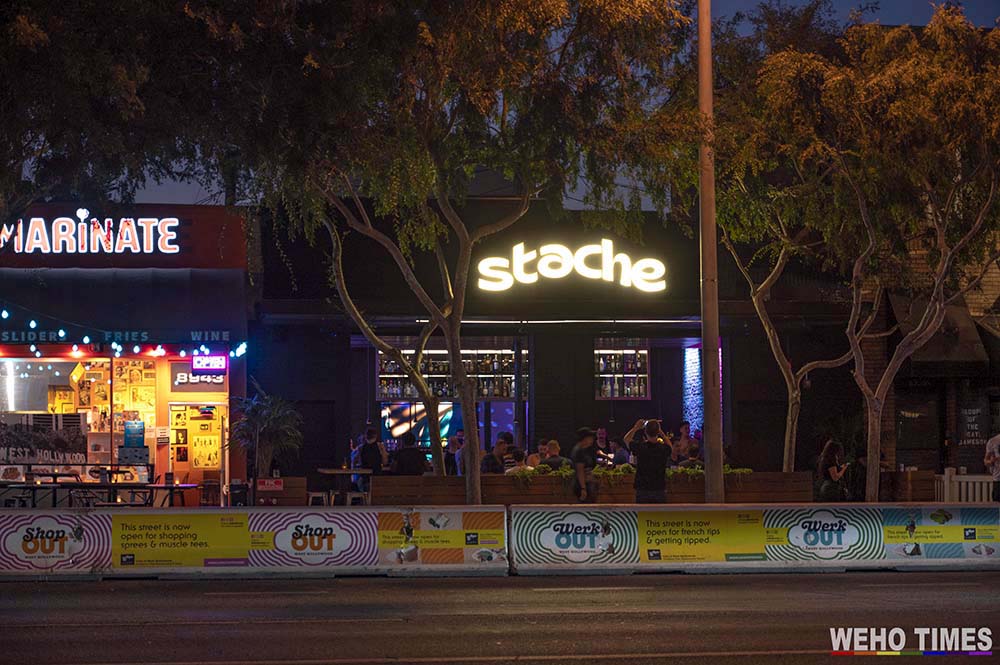 West Hollywood planning commissioner Marquita Thomas was at the mock opening last night. She supported the project at a Planning Commission meeting this past January where an unanimous vote approved the new nightclub in the Rainbow District area. “As a chamber leader, a leader of an LGBTQ chamber of commerce, I know better than most that 50% of our LGBT business will not be coming back, so to see another one open is wonderful,” said Thomas at the meeting. “Not only will it revitalize that section of West Hollywood, it will also create jobs.”

“I think it adds vibrancy to the neighborhood,” Bobby Trendy told WEHO TIMES. “Its welcoming, open-air floor plan makes for a nice atmosphere. The bathrooms have proper lighting unlike most places that make feel like your getting an X-ray when you walk in. The food was plant based and well presented when it came out.” 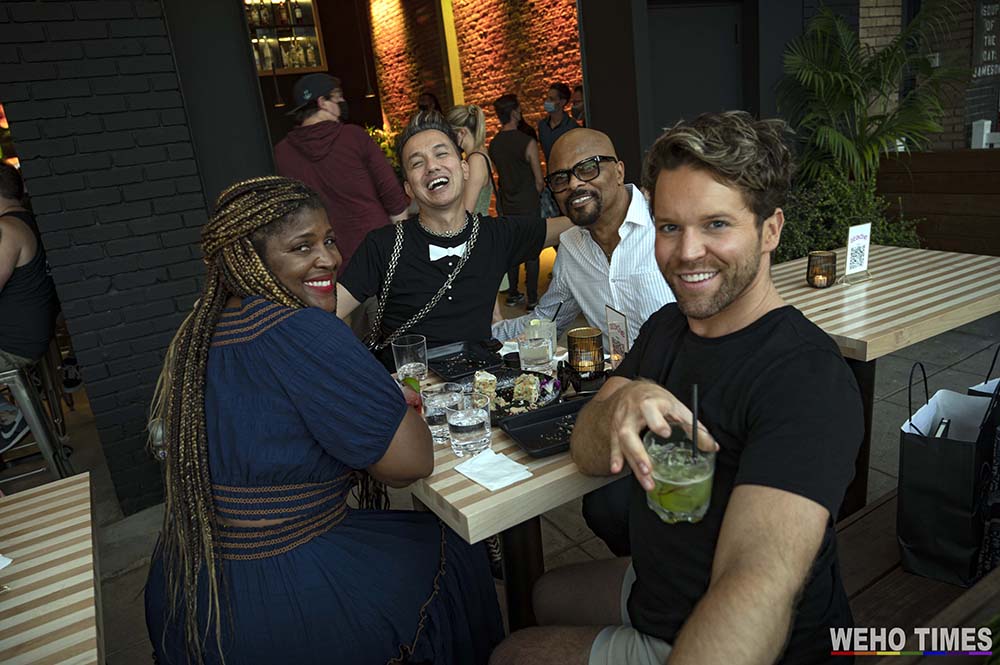 Stache West Hollywood’s fully plant based menu will serve breakfast, lunch and dinner. The nightclub portion will offer live entertainment like drag queen bingo, drag shows, karaoke and brunch on the weekends. The venue will also offer a small dance floor as part of their nightclub license.

Short for mustache, Floyd says the name was chosen as a throwback to the gay male retro aesthetic of the 70s and 80s. The facial hair is also a way to honor the millions of gay men lost to the AIDs epidemic and celebrates the resilience and perseverance of the LGBT community.

Don’t appreciate the fact that he took it upon himself to cut the city tree along the sidewalk in order for his STACHE sign to be more visible from the street. The city should fine him.

While I’m rooting for them and wish them success, I’m never going to think this was a good name. Because hair and food always go great together!

Another nightclub…yay. (Eyeroll). I wish any business all the best but the neighborhood does not need another night club.

Those of us of an age have almost nowhere left to go in WeHo. The name of this place is supposed to recall those in the 70’s and 80’s who died from AIDS. But this place does not sound like a place those of us who survived, who are now in our 60’s, 70’s and 80’s would fit in. We are now members of the invisible generation, with no where to go in the town we helped create. I will, to be fair, go to Stache, probably more than once after it opens. But I am not optimistic. I would… Read more »

For those who were prematurely mourning the demise of “Boy’s Town, take heart. All is not lost…….