The California Coalition for Safe Re-Opening (CCSR) joined supporters, businesses owners, employees and small business advocacy groups for a Save Small Business protest on Saturday, December 12, 2020, in front of the TCL Chinese Theater. Demonstrators wore matching green t-shirts in solidarity with CCSR, calling for the end Governor Gavin Newsom’s ban of outdoor dining and other restrictions that have had a devastating impact on small businesses during record-breaking spikes in coronavirus cases throughout California.

Speakers spoke from a podium at the TCL Chinese Theater courtyard. They demanded positive government action, reassessment and roll back on the bans for outdoor dining, salons, gyms and other affected business by unsubstantiated, commerce-killing restrictions.

“We ask small businesses across the city, the county, the state and the country to rise up,” said Nick Rimedio, Chair of West Hollywood Chamber, general manager of La Peer hotel, and a founder of the Coalition for Safe Reopening. “Be safe. Wear a mask. Take our example. Stand six feet apart, but let your government know that this is not acceptable. We’re asking for empowerment of our local authorities, our cities. With the shutdown by the state, we’ve gone bigger by the super regions. How is that possible? We need to have COVID responses done at the city levels, smaller, not larger. We’re asking for a partnership with our state, creating a safer open task force. Governor Gavin Newsom, we’ve been calling you for months. Please pick up the phone. Please answer our calls. Please create a task force so that millions of employees are employed for the holidays so they have food to put on their tables for their families, so that they have a future they can continue to invest in.”

“Everybody knows it, the shut down is bullshit!” Protestors chanted as they walked down Santa Monica Boulevard led by a caravan of West Hollywood Sheriff’s to control traffic for the safety reasons.

Morrill also called out the names of businesses with empty patios as they passed and asked Governor Newsom to open them up. “Open Kitchen 24!” She yelled.

The march was peaceful. Moving vehicles honked their horns in support. Several workers stepped out of their businesses to cheer the marchers on.

The protest also attracted some anti-maskers and Trump-supporting “patriots.”

“Remove your muzzle!” One man called after the marchers. “Don’t cover your beautiful faces with a mask!”

However, the men and women (and some children) kept their masks on. They also used a cord as a measuring stick to make sure they were marching with six feet apart at all times.

The Coalition expressed its concerns back in April that well-intentioned, but reckless, arbitrary shutdowns will result in a reality where economic impact will itself become a public health issue as many businesses are facing permanent closures before the new year.

CCSR is calling for an immediate emergency meeting with Governor Newsom and other top state officials to discuss safer alternatives to shutdowns, the task force, and revisiting other measures contained in the California Coalition for Safe Reopening’s Three Point Economic and Public Health Recovery Plan proposed for immediate measures to be considered prior to any more business shutdowns.

CSR is calling for an immediate emergency meeting with Governor Newsom and other top state officials to discuss safer alternatives to shutdowns, the task force, and revisiting other measures contained in the California Coalition for Safe Reopening’s Three Point Economic and Public Health Recovery Plan proposed for immediate measures to be considered prior to any more business shutdowns.

The California Coalition for Safe Reopening consists of local chambers of commerce and business and trade associations. Responding to the current COVID-19 emergency, the Coalition advocates for safe, reasonable, and predictable reopening plans in California that ensure the health of every resident, worker, and customer. For full list, please go to the website. More info and digital media kit at www.wehochamber.com.

The march ended a little after 2 p.m. at Santa Monica and Doheny Drive where protestors made some closing comments and then spoke with members of the media. 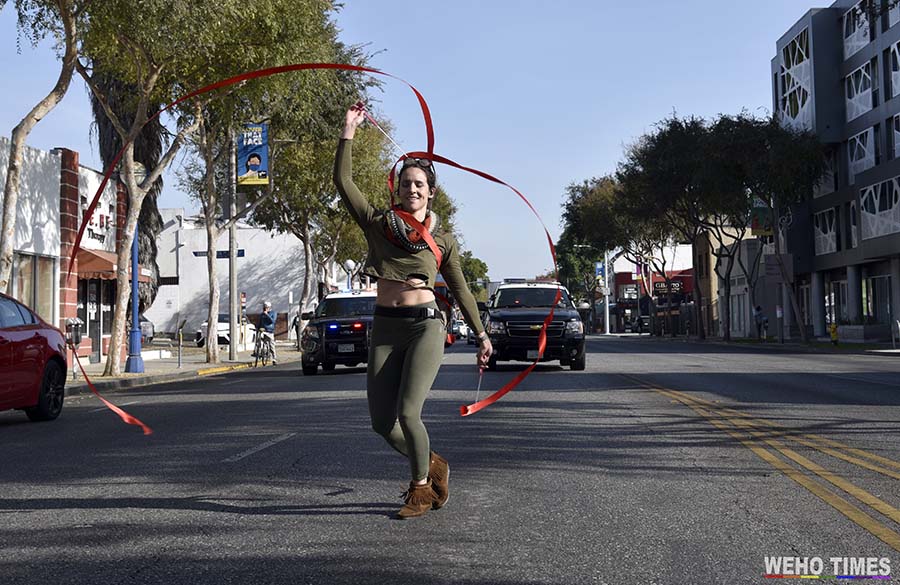