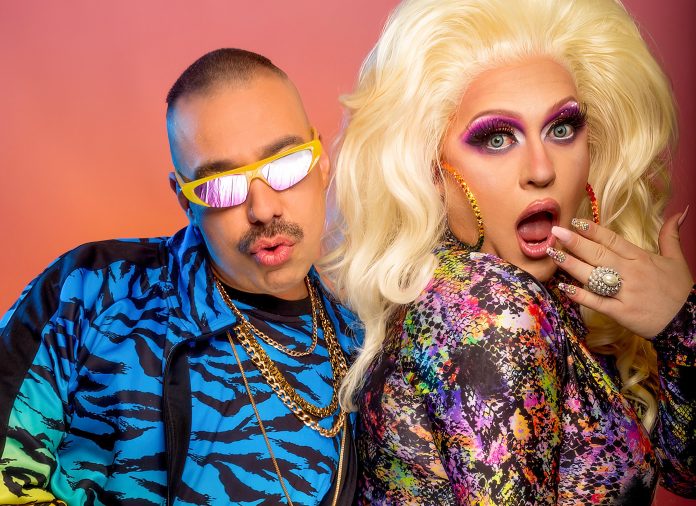 WeHo-based singer Leopold Nunan (aka Leo from Rio) has teamed up with drag queen Pietra Parker to take over the City of Beverly Hills with a new music featuring the debut of a new song and music video about ostentation and empowerment.

The new single Ballin’ in Beverly Hills will have a world premier tomorrow, Thursday, November 18th. Check back here at WEHO TIMES to get a first listen and look at the song and music video.

The Brazilian queer artist says he is living out the fantasy of the American dream in new his music video shot on Rodeo Drive and in front of the Beverly Hills Sign.

Leo says the new single is a mix of hip-hop, afrobeat, trap and favela bass. It promises to be a bombastic track for the dance music lovers. The track was produced by 16-year old phenomenon, heavy hitter from Mato Grosso, Brazil, Karan!

This will be Leopold’s 6th single release and it will be Pietra’s music debut. The music video is a marathon of absurd looks directed by fashion photographer Will Cook. Aside from scenes on Rodeo Drive and Santa Monica Boulevard in Beverly Hills, there are also party scenes at a private residence inside a friend’s mansion.

The lyrics were written by Leopold and Pietra in partnership with Z33R0, an East LA Latino composer, queer performer and activist.

“We gathered all our friends to help shoot the music video, so we could realize this dream together,” he said. “The Ballin’ production was done 100% independently. There will be also 3 other versions, a techno version by Golden Kong, a riddim’ take by Klean and a arabian trap signed by Klap – curiously all Brazilian producers.”

“There are a lot of new sounds and beats coming out of Brazil lately,” he added. “We are here to make music and can’t wait to get the crowd to dance and laugh with us just like a Carnaval party.”

A 2021 WEHO Arts Performance Grant recipient, Nunan brought his  Leo From Rio Sound Machine” to the City of West Hollywood when he invited his musical friends and guests to perform with him at a high energy interactive pop-up dance concert at West Hollywood Park on Sunday, September 26, 2021.

Ballin’ in Beverly Hills will get its official release on November 18th.