A deputy at the West Hollywood Sheriff’s Station has confirmed that sheriff deputies shot at a vehicle theft suspect during a pursuit on Saturday, January 21, 2023. It is not yet clear if the suspect was fleeing by foot or by car. The incident happened at roughly 6 p.m. near the Sunset Marquis, located at 1200 Alta Loma Rd. The deputy would not give any other information as this is an ongoing investigation.

Investigators have not yet confirmed if there was a hit. The deputies are reported to be unharmed and the manhunt is ongoing.

The Sunset Marquis was sealed off for an unspecified amount of time. Guests were not allowed to enter or leave the property during the investigation. There were bullet casings on the street with markers in the crime scene.

“Definitely surreal to see evidence markers in front of the hotel,” Sean Beckner-Carmitchel posted on his Twitter feed. “People coming in and out of the hotel for dinner and to stay being escorted in and out by deputies.”

Definitely surreal to see evidence markers in front of the hotel. People coming in and out of the hotel for dinner and to stay being escorted in and out by deputies. pic.twitter.com/WyJimm4S7e

Crime Stoppers uses a three-part approach to preventing and solving crimes. The first part of the program is to empower the community by providing a safe way to report criminal activity. Secondly, Crime Stoppers partners with all forms of media in the Los Angeles region to inform the community on how to anonymously report crimes. Law Enforcement is the final part of the triangle; they follow-up on tips from
community members.

Thanks for being the first to report on this.
It happened around 5:05. All of Alta Loma was sealed off until just before midnight.
Car traffic was not allowed. Residents had to park elsewhere and walk escorted up the street.
The bigger story here is Weho Sheriff’s officers opening fire on a street with high foot traffic. There are 328 condos on Alta Loma. Sunset Marquis has 152 rooms + restaurant guests and employees. Many locals cut up Alta Loma to get to Equinox, Soul Cycle and Sunset Plaza. More information is needed why shots were fired. 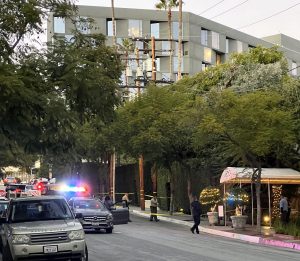