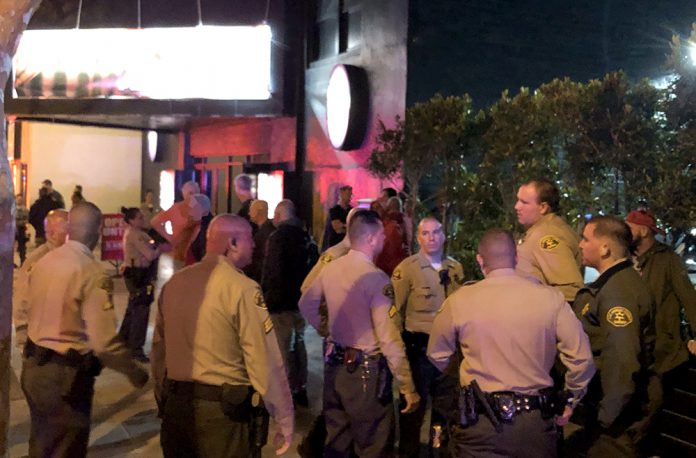 Adult movie night at Studs Pussycat Theater in West Hollywood was abruptly interrupted when heavily armed Sheriff’s Deputies raided the theater in response to a call that a man had been shot and that an armed suspect was hiding inside the theater.

At around 8:45pm last night, around 20 police officers responded to a call made by a man inside the theater. The man dialed 911 and insisted he saw a man with a gun and that he saw another man bleeding. The man appeared to be under the influence and in mental distress.

Paramedics stood by outside the theater with a gurney in case they needed to transport a wounded victim to a nearby hospital. 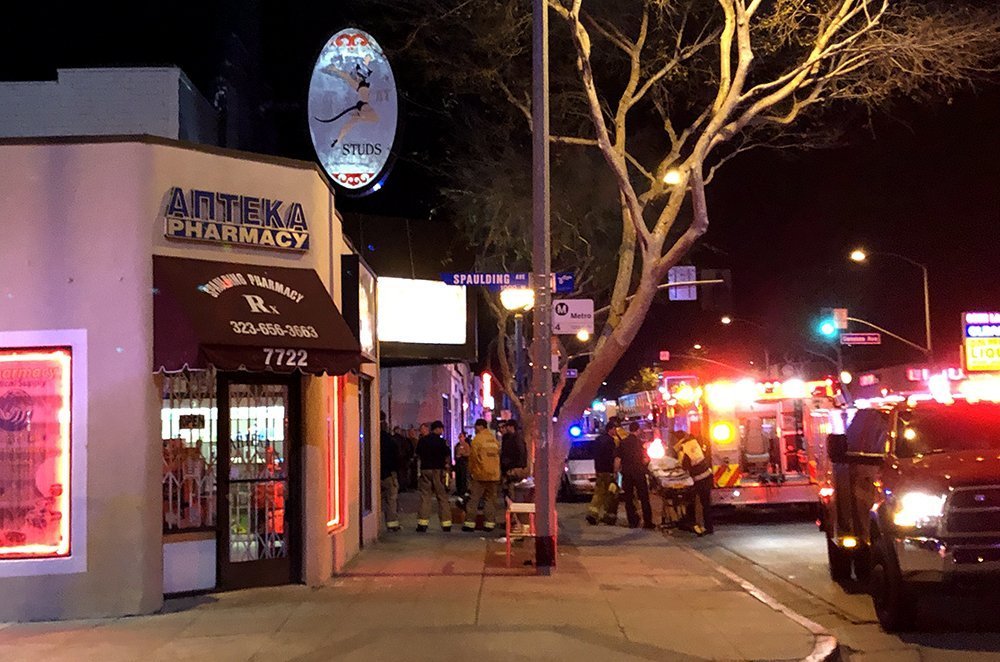 A police helicopter shined a spotlight on the Studs Pussycat theater overhead, while theater patrons were escorted outside of the building. Eyewitnesses say some of the men were escorted out through the theater’s back alley with their hands tied behind their backs with plastic ties. The men waited patiently by the parking lot while deputies combed through the entire theater looking for an armed suspect. 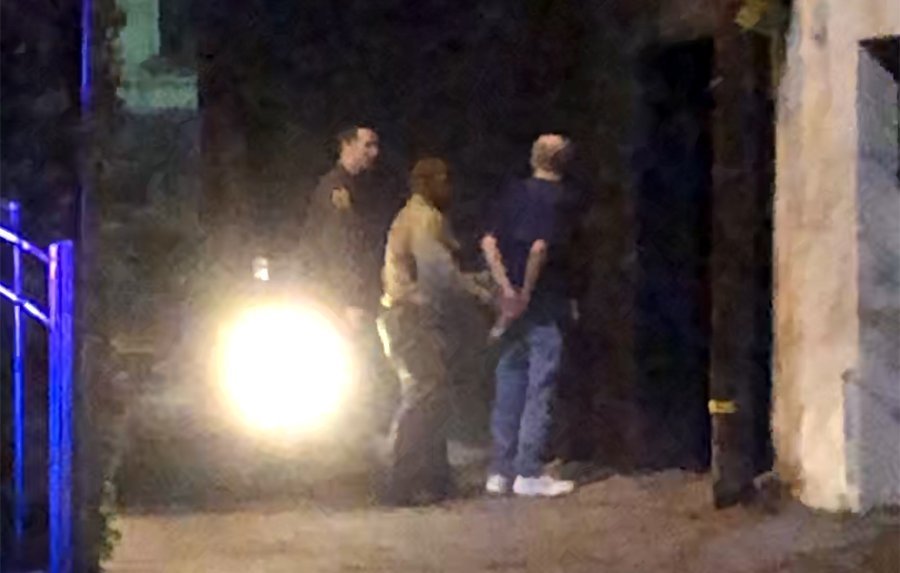 “This guy started screaming, ‘Gun! There is a gun! Someone has been shot,” a very nervous Stud’s employee told WEHO TIMES shortly after the incident. “The guy was crazy. He kept screaming that there was a gun in the theatre. He called 911. You can’t scream gun in a theater if it’s not true. It is like screaming fire. You just don’t do that. It was terrifying. My hands are shaking.”

The call turned out to be a false alarm. Eyewitnesses say the man who made the call was belligerent. He was handcuffed and arrested at around 9:05pm. No injuries were reported. 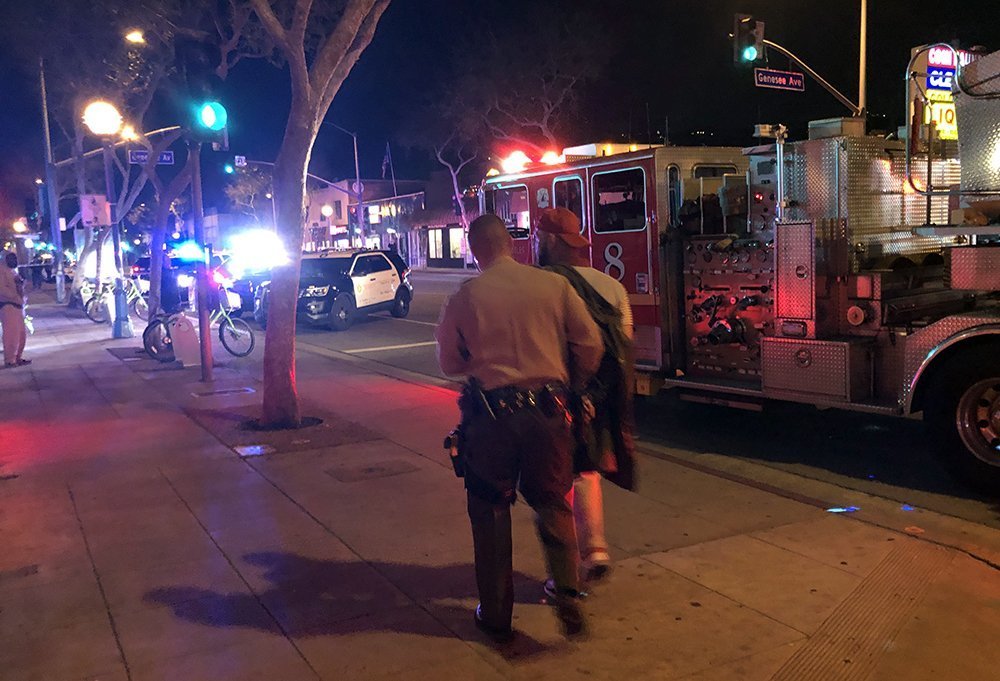 A bystander said the incident was brief, lasting around 20 minutes. Once the theater was secured, the patrons were allowed to go back inside to continue their Friday night at the movies.

“The whole thing was terrifying, when the police came in here with guns out” the employee added. “This type of thing is not common. It has never happened here before.”

Studs Pussycat Theater, located at 7734 Santa Monica Boulevard in West Hollywood, is widely remembered as The Tom Kat theater. It is the last Pussycat Theater in existence. What once house a large theater venue, has been split into three smaller theaters and a larger main theater. It specialized in all-male gay movies, throughout the 90s and early 00s. It now shows heterosexual and transgender adult films along with its gay male movie lineup. 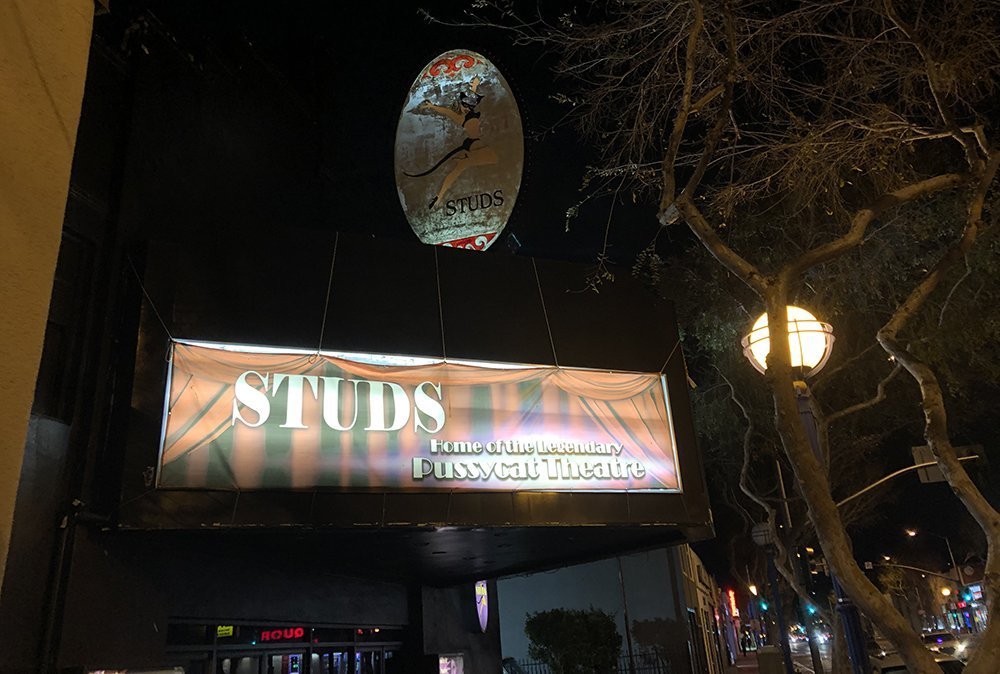