The Foundation for The AIDS Monument hosted a private groundbreaking ceremony at the future site of STORIES: The AIDS Monument in West Hollywood Park, on Saturday, June 5, 2021. Among the speakers at the event commemorating the 40th Anniversary of the first CDC report related to AIDS, were actress and activist Sharon Stone, author and activist George Takei, and Dr. Michael Gottlieb, who first identified HIV while treating patients in Los Angeles. Other speakers included prominent LGBT/AIDS activists, board members, and supporters of the monument.

The event was a small gathering of invited guests and members of the press. The ceremony featured a variety of speakers who shares some of the stories that will part of the monument. 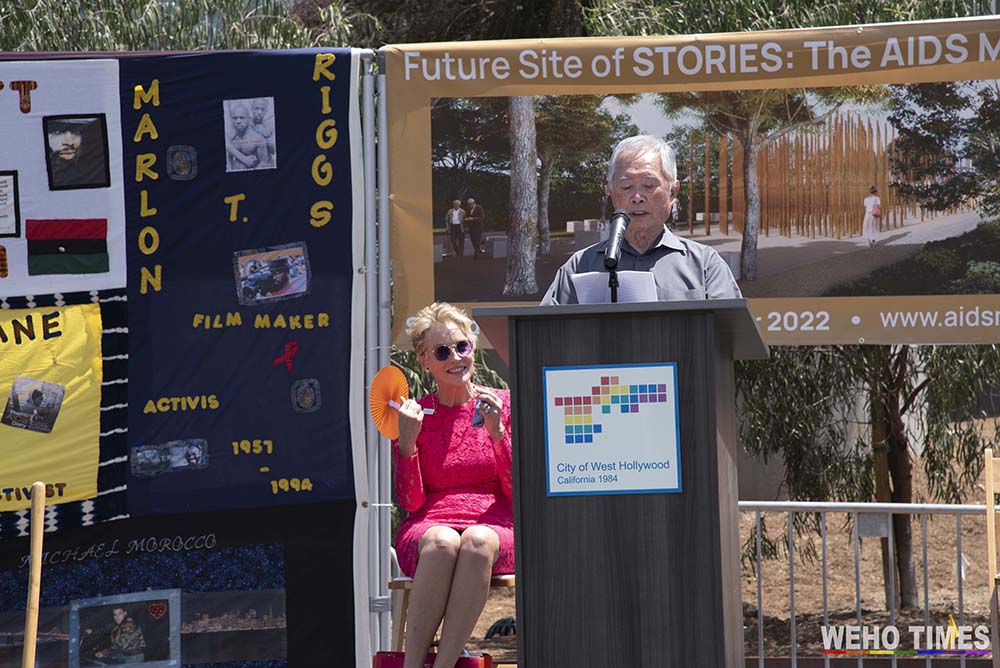 Also in attendance were former West Hollywood council members, John Duran, John Heilman, Jeffrey Prang and Abbey Land, all who played role in approving the construction of the monument. In 2015 members of the council with the leadership of Duran and D’Amico, initiated a plan to design and install an AIDS monument for remembrance, education and celebration.

STORIES: The AIDS Monument is being developed by the Foundation for The AIDS Monument in partnership with the City of West Hollywood. The Monument will be a permanent 7,000 square foot installation in West Hollywood Park with an audio tour and audio stories. The Monument will remember those lost to AIDS, those who survived, the protests and vigils, the caregivers; celebrate those who step up when others step away; and educate future generations from lessons learned. The Monument is designed by Daniel Tobin of UAP Company, whose design was selected following a design competition. It is scheduled to open in late 2022.

The onset of the HIV/AIDS epidemic had a significant impact in West Hollywood from 1981 through the mid-1990s. The elevated HIV infection rate among gay men caused a devastatingly high number of deaths in the City. The City of West Hollywood was one of the first government entities to provide social services grants to local AIDS and HIV organizations. The City of West Hollywood sponsored one of the first AIDS awareness campaigns in the country in October 1985 and the City’s response to the AIDS crisis has been recognized as a model for other cities, nationally and globally. The City actively participates in the development of programs that can bring awareness about the HIV/AIDS epidemic and services to people living with HIV/AIDS and the City has announced its vision to become an ‘HIV Zero’ city.

As of 2020, AIDS has killed approximately 725,000 people in the United States, more than all the Americans who died in World Wars I and II combined. Globally, through the end of 2019, AIDS has killed over 32.7 million people. Tens of thousands of Americans are infected with HIV each year, and many still die of AIDS. Stigma against those with HIV persists. Income inequality and the lack of equal access to healthcare remain the greatest obstacles to life-saving treatment for the most vulnerable Americans.

ABOUT THE FOUNDATION FOR THE AIDS MONUMENT
The Foundation for the AIDS Monument was started by a group of volunteers, who realized the need in West Hollywood for a world class work of art and a digital collection of stories and interviews to ensure that the history of the AIDS epidemic, both locally and nationally, is chronicled and preserved for future generations. The Foundation was founded in 2013, and since that time has raised over $5 million for the design, construction and installation of the Monument and related programming and community activities to make the dream of such a monument into a reality. The Monument reminds us to never forget our history and inspires us to continue to fight for equal access to quality healthcare, for expanded civil rights, and for a cure.

For more information, or to make a donation, visit: https://aidsmonument.org

Foundation for The AIDS Monument

Thanks for the great coverage, WeHo Times!

For your readers: You can receive regular updates about STORIES: The AIDS Monument and FAM’s ongoing events and programs by signing up for our newsletter at admin@aidsmonument.org