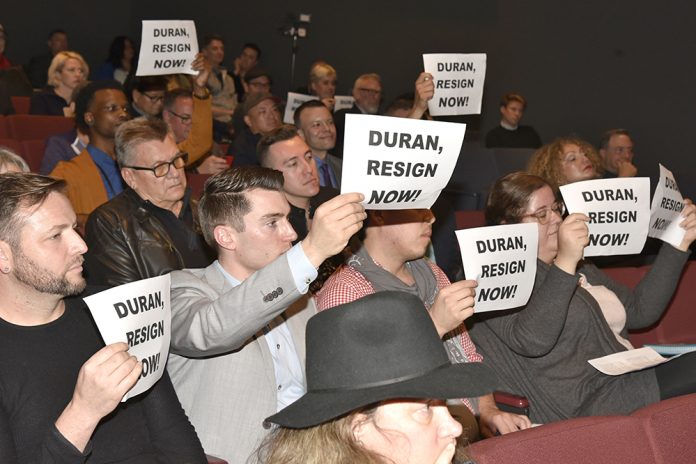 It was a cringe-inducing, if not fascinating West Hollywood city council meeting this week, on Monday March 4, when council members found themselves in an uncomfortable debate over how to punish now former Mayor John Duran over sexual misconduct allegations that were made against him by three members of the Gay Men’s Chorus and his recent comments and behavior that many in the community find unbecoming of a West Hollywood city official.

Duran stepped down as mayor prior to the city council meeting, citing that it was best for his health after being treated for blood clots.

Robert Oliver, the former WeHo Public Safety Commissioner who abruptly quit his position as commissioner when he was unable to get his fellow commissioners to speak out against Duran’s inappropriate behavior, led a group of anti-Duran demonstrators at the council meeting. He showed up early that night with a stack of signs that read “Duran, Resign Now!” which he distributed to those seated who had the same sentiment. 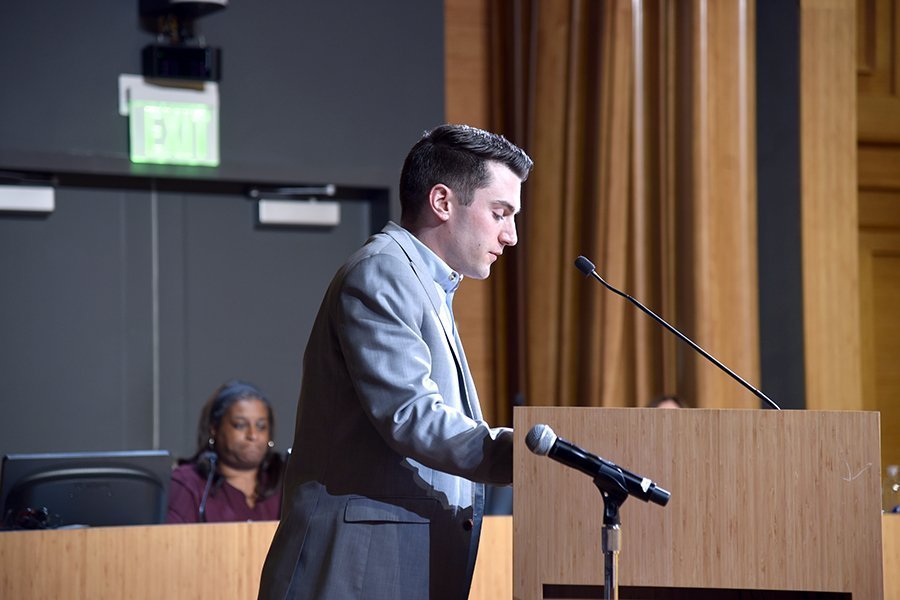 “As a progressive city we cannot continue to give a pass to our representatives who consistently demonstrates bad behavior, poor judgment, and offensive language,” Oliver said from the podium during public comments. “It takes extreme courage to come forward and stand up to someone in power and the victims have spoken. It is now our time to protect them and show them that we care. We have enough information, enough allegations, and enough inappropriate behavior by John Duran himself to act. He has shown a total inability, or unwillingness to take responsibility for his actions. As a politician and a criminal defense attorney, he has attempted to deflect and distract, but we will not be distracted and we will hold him accountable. His behavior continues to reflect poorly on the residents of West Hollywood who are here tonight to say enough is enough.”

In his prepared speech, Oliver acknowledged that Duran did great things for the city, but he added that stepping down as mayor was not enough and that Duran needed to resign his position as an elected official to protect his legacy.

Other speakers were more off-the-cuff with their demand for Duran’s resignation. Among them were Will Hackner, the owner of Varsity Gay League, Rosalind Jones of the #MeToo Survivor March Movement, former WeHo council member Steve Martin, civil rights activist Jerome Kitchen and Board President of CSW, Estevan Montemayor, to name of few.

Duran seems to have a lot of supporters who wish him well on his Facebook page, but none that would dare speak in his defense at a public city council meeting.

Under the California law, councilmembers answer to constituents, not to their colleagues. Hence, the law limits the power of involuntary removal from office to the electorate.

The council debated over measures that the council may legally take to show its disapproval of a colleague’s behavior. They debated over four options. The option was to remove Duran as Mayor was off the table after Duran handed the gavel to D’Amico. The objects up for debate were:

4) Direct preparation of a resolution of censure. Censure is an action of the City Council that expresses disapproval

The vote was unanimous to deny Duran the right to travel on city business at the city’s expense for one year; deny him reimbursement for city-related expenses for one year; he is to have an escort of sorts present when dealing with city staff, his city emails monitored and they opted to remove him from Christopher Street West’s subcommittee where he partnered with John D’Amico.

There was a back and forth about whether or not to censure Duran. Miester said that a resolution of censure was not going to do anything except state what was already stated, which was council’s disapproval of his actions. Heilman said he wanted the Duran conversation to go away and the resolution of a censure would invite Duran to respond which would further the dialogue to continue in future meetings.

“I think in the resolution of censure, I think all of us have already censured him in our own way,” said Heilman. “Do we really want to have another hearing with John here to respond to a censure resolution or can we tonight with orally and writing–can we express our condemnation of behavior that is so contrary to the city’s policy.”

“keep in mind that we don’t have a record of proven allegations or investigation reports that have necessarily proven conduct and so it is going to have to be very carefully worded in order to avoid making assertions that are not proven true and that are not substantiated by evidence and that are not substantiated by the record,” said WeHo’s City attorney Mike Jenkins. “We have a lot of innuendo. We have a lot of unsupported allegations and I would be uncomfortable including those in any resolution of censure. Consequently it’s going to be a challenging task to put together a resolution that would ultimately meet the test for something that I would be comfortable and ultimately you would be comfortable with.” 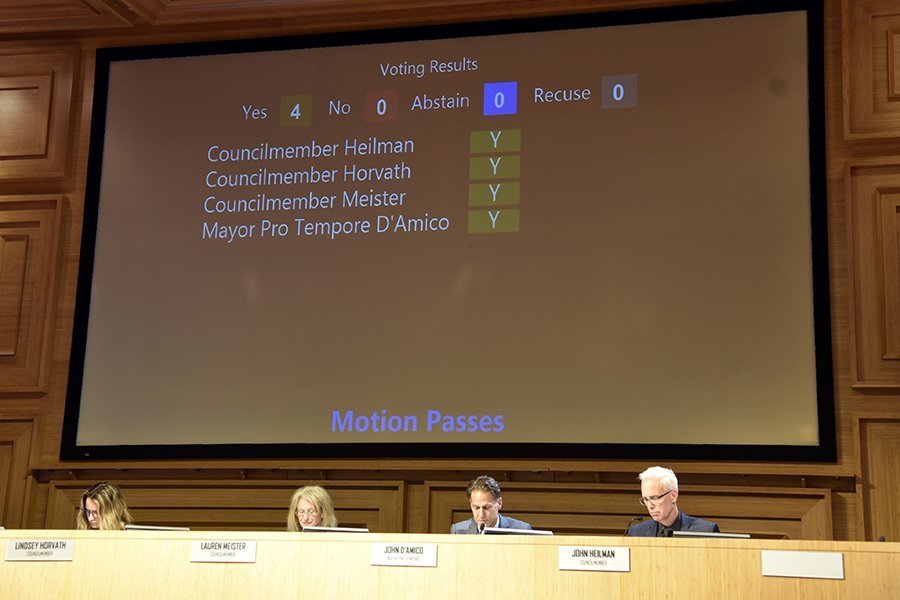 Horvath and D’Amico decided a censure was necessary. Meister joined Horvath and D’Amico on the censure vote. A reluctant Heilman gave in and voted for censure with the understanding that Duran would have his say at a future council meeting. The vote was unanimous to have the City Attorney and city staff draft a resolution for the Council to censure Duran. This meeting took place the night before the City’s Municipal Elections where D’Amico, Horvath and Meister are up for re-election.

Meanwhile, council member Duran continues to deny the sexual misconduct allegations made against him by the Gay Men’s Chorus.

The Duran discussion ended with John D’Amico being voted in as Mayor of West Hollywood and Lindsey Horvath taking the title of Mayor Pro-Tempore.

SO, this is ‘sort of’ okay in certain groups of gay men? That’s fine. They should play together. If others want to participate – good enough. However, it is really more civilized to wait until you know you are being invited to coppafeel and avoid the type of shame and humiliation Mr. Duran has brought upon himself. When you are looking horses, at least wait for the hoofbeats.

Will Hackner of the gay varsity league built his gay business on sexualizing his gay players by taking pics of men without their shirts and men in their speedos and posting them on social media to attract other gays. The big joke is that Gay varsity league is a great place to get laid if your young and white that is. Not sure what he was doing up there talking about sexual propriety. He is making money out of sexualizing men. He has no room to talk and is a perfect example of the hypocricy that is like a disease… Read more »

Great pic of Robert Oliver holding one of the signs I believe he passed out at the meeting. It was a hard meeting to watch, and seemed to never end. I hope happier times are ahead for everyone.

Sounds like a whole lot of bitter kween slap fighting and hair pulling in heels. Fine let them have their say as is their wont. All the other crap is just a circular firing squad with blanks. The real test is election day and then votes count. If you have a viable charge and evidence then take it to the Sheriff and District Attorney. Otherwise it’s all just as described above a sissy fight.