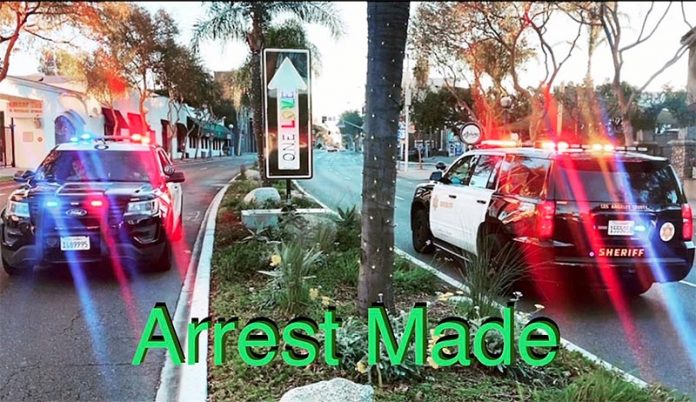 The West Hollywood Sheriff’s Department reports several arrests were made for stolen vehicles this past weekend, three of which occurred on Sunday, April 3, 2022, and one includes a bizarre case where a man tried to steal a Hollywood tour bus.

The first arrest was made Sunday morning at approximately 8:40 a.m.. West Hollywood Deputies arrested a male suspect driving a stolen/embezzled vehicle (10851 CVC) on Santa Monica Boulevard. According to an update, the car will be returned to the victim.

The second arrest also happened in the morning hours of the same day at approximately 10:50 a.m.. West Hollywood Sheriff’s Station Deputies arrested a female adult driving a stolen vehicle on Santa Monica Blvd. The stolen vehicle was reported stolen from LAPDs 77th Division. The car was recovered and will be returned to its rightful owner as well.

Later that Sunday afternoon at roughly 12:40 p.m. a man tried to steal a Tour Van on the Sunset Boulevard in Los Angeles. A man believed to be experiencing homelessness drove off with the van, which started a short chase with Los Angeles Police. He crashed onto a parked car, but no injuries were reported. The pursuit ended at Sunset and La Cienega boulevards where investigators say the suspect got into a brief standoff with officers. At one point he removed his pants and then put them back on before he attempted to walk away from the scene. He was arrested at 8560 Sunset Boulevard. He has since been placed into custody.

On Friday, April 1, 2022, at approximately 1:30 p.m., a victim was getting his Range Rover detailed at a local car wash location in the city of West Hollywood, when a suspect got into the driver seat and drove off with the victim’s new vehicle, worth $130K.

West Hollywood Sheriff’s Station Detectives investigated the incident and worked with the local car wash, Range Rover, and San Bernardino County Sheriff’s Department (SBCS). After a few hours, the Range Rover was located at a gas station in the city of Victorville.

At approximately 6:10 p.m. SBCS deputies detained and recovered the stolen vehicle. One male adult was arrested and remains in custody.

“Thankfully the local car wash had really good working cameras, and our detectives were able to get a good ID of the suspect! Range Rover was very cooperative during our investigation,” tweeted LASD WeHo sergeant Joana Warren. “@sbcountysheriff patrol deputies were on point! Within hours the suspect was in jail!”