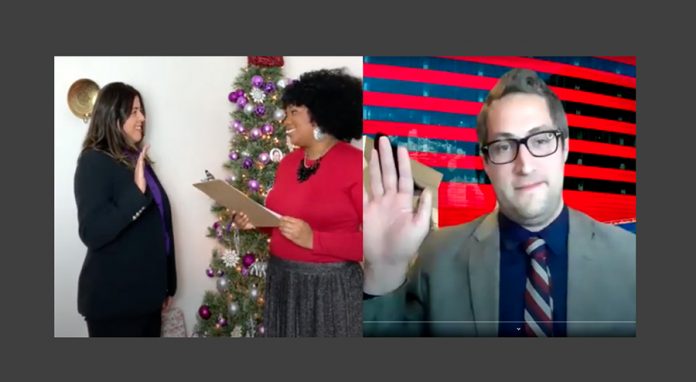 Sepi Shyne and John M. Erickson were sworn in to the city council of West Hollywood. They both took an Oath of Office during the regular council meeting on Monday, December 7, 2020, which took place as a teleconference meeting in adherence to COVID-19 health and safety guidelines. Councilmember Sepi Shyne was sworn-in by her wife, Ashlei Shyne, and Councilmember John M. Erickson was sworn-in by City of West Hollywood Community Events Coordinator Larissa Fooks.

As an LGBTQ+ and civil rights leader for more than 20 years, her leadership has helped secure equal rights for all. Before her election to the West Hollywood City Council, Councilmember Shyne served on the City of West Hollywood’s Lesbian and Gay Advisory Board, on the City of West Hollywood’s Business License Commission, and on the Los Angeles County Assessor’s Advisory Council on which she continues to serve. Additionally, she has led many boards and organizations, including the LGBT Bar Association of Los Angeles and as a Board of Governor and Steering Committee leader with the Human Rights Campaign Los Angeles. Councilmember Shyne is a Co-Organizer of WeHo Neighbors Helping Neighbors, a community group created during the pandemic to help get resources to seniors, people with disabilities, and people in immunosuppressed households via social media and volunteer check-in calls. In every board and organization she has led, she has recruited and elevated women and people of color to leadership positions to create more diversity, inclusion, and equity.

Councilmember Shyne lives in the Mid-City area of the City of West Hollywood with her wife and their fur-babies.

The immediate past Vice Chair of the City’s Planning Commission, Councilmember Erickson’s priorities on the City Council include: overcoming COVID-19 through sensible health practices and economic recovery; creating more affordable housing and protecting renters’ rights; reducing traffic through alternative transportation strategies, fighting climate change and making our city more sustainable; and implementing policies that make the city truly free of prejudice and welcoming to all.

Councilmember Erickson has earned a reputation as a fearless, tenacious, and effective voice for those who need one. His advocacy work includes serving as a National Board member of the National Organization for Women and President of the ACLU Southern California. In 2017, he became Governor Brown’s appointee to the California Commission on the Status of Women and Girls and served as an organizer for both the Resist March and the historic Women’s March Los Angeles. He serves on the Board of the Women’s March Los Angeles Foundation. Councilmember Erickson was part of the End Statute of Limitation on Rape (ERSOL) Campaign, which overturned California’s statute of limitations on rape and sexual assault in 2016.