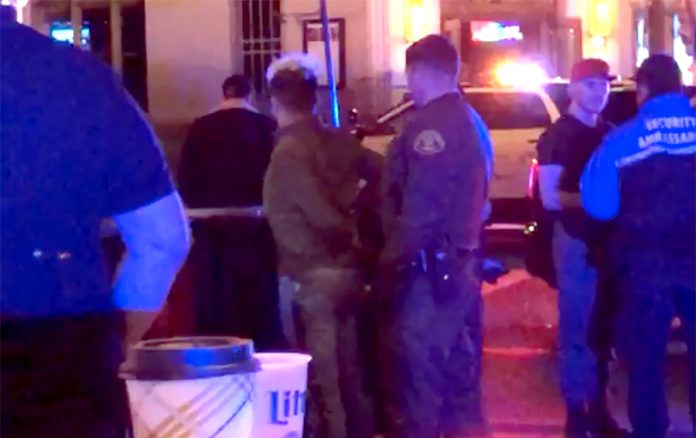 A normal Thursday night/Friday Morning in WeHo’s Hollywood turned bloody when a security guard was stabbed in the back outside of Micky’s Bar while escorting a man out of a bar in West Hollywood.

Lt. Nagelmann with the Los Angeles County Sheriff’s Department’s West Hollywood Station told KTLA Channel 5 News that the incident occurred at about 1:18 a.m. on the 8000 block of Santa Monica around the corner of Larrabee St and Santa Monica Boulevard. The security guard was escorting the suspect out and the man took out a folding knife and stabbed the guard twice in the back, according to Lt. Nagelmann.

Authorities say that Deputies responded within seconds of the incident and detained the suspect. The Citizen’s App reported the incident at 1:25am. An update a minute later reveals that Police requested additional units to the scene of the stabbing. Officers were on the scene and the suspect was detained, by 1:26am according to the App.

Citizen App user semibluff posted a video showing the victim being taken to the hospital and the suspect being detained outside of Micky’s. The situation was contained. People walked past the suspect who stood calmly in handcuffs. He did not appear to be a threat.

Eye witnesses say the victim had bandages with blood soaking his back. He sat on the curb outside the Micky’s Bar, while he waited to be taken to the hospital. He seemed to be responsive and was able to stand on his own.

A crowd was seen gathered at the scene where sheriff’s officials appeared to be interviewing witnesses and speaking with other security guards.

Chanel 5 reports. The victim suffered two non-life-threatening stab wounds in the upper back. He was transported to a nearby hospital and was expected to survive, Lt. Nagelmann said.

Authorities have not provided information on why the suspect was escorted out of the bar, or whether he was under the influence of alcohol.

No other victims were reported.

Calls to Micky’s Bar WeHo regarding the stabbing were not returned.