Search Continues for Cat Stolen From Porch in West Hollywood 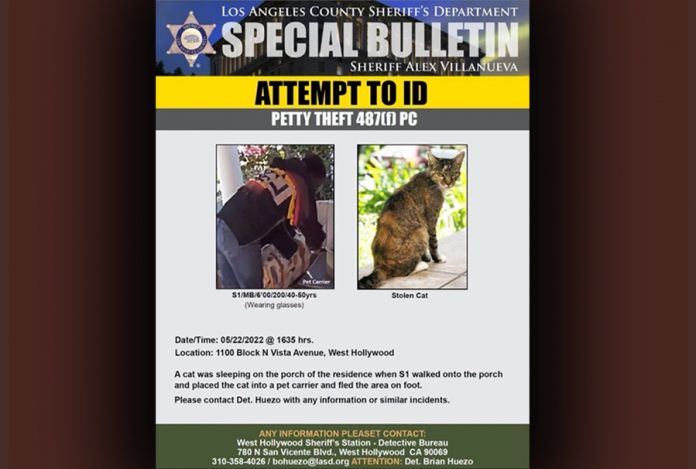 The search continues for a cat stolen from a West Hollywood residence this past weekend. A police report has been filed with the West Hollywood Sheriff’s Department and a special Bulletin has been released by Sheriff Alex Villanueva attempting to ID suspect who was caught on Ring surveillance stealing sleeping cat on the porch of a residence on the 1100 block of N Vista Avenue in West Hollywood. The date and time stamp on the camera footage is Sunday, May 22, 2022, at 4:35 p.m.

“There is an award for any leads resulting in the identification, arrest, and conviction of the individual responsible for the aforementioned theft,” she said Kim Byers who was caring for the cat known as Miss Kitty. “Anyone with information regarding the identity of the pictured individual are requested to contact the West Hollywood Sheriff’s Dept at: 310-855-8850.

Byers says Miss Kitty was not at her usual spot this past Sunday. After a day without a sign of Miss Kitty, she played back her Ring camera footage and found a 30-second snippet showing a stranger in her front porch putting the sleeping cat into a pet carrier.

@ring footage captured Miss Kitty-a semi-feral cat being stolen from the porch where she was being cared for in @WeHoCity by Plummer Park. Call Kim at 424-625-8086 with any info on the sickly cat. Or just return her. #wehotime #wehonews #wehocity @WHDLASD pic.twitter.com/lDdx6zoNEL

“The person came with a pet carrier, so it looks like it was premeditated. We have no idea who it is. It kind of strikes me as someone who was on foot, but it’s hard to tell. From what I could tell Miss Kitty was asleep in her heated bed and this person grabbed her before she had a chance to wake up.”

Byers says Miss Kitty is really fragile and quite old. The neighborhood on Vista Street knows the cat well. She was a catch, fix, and release about 14 years ago.

“If you are the person who took her, please just place her back in her bed which is waiting for her,” she posted on her Facebook page. “NO QUESTIONS.”

Miss Kitty was taken during the City of West Hollywood’s inaugural Pet Week, which includes a Feline Day.

Thank you again. WEHO TIMES. All of us on Vista who are long time fans of and LOVE Ms. Kitty are vvv grateful. Fingers crossed awaiting her return. Virginia Gillick

I am still shocked and saddened about someone…in broad daylight…obviously in front of a Ring security camera, feels it’s ok to steal! and someone’s pet!
I am hoping and praying that someone knows something and Miss Kitty is returned.
Sadly, it seems virtually impossible to prevent such crimes!!!