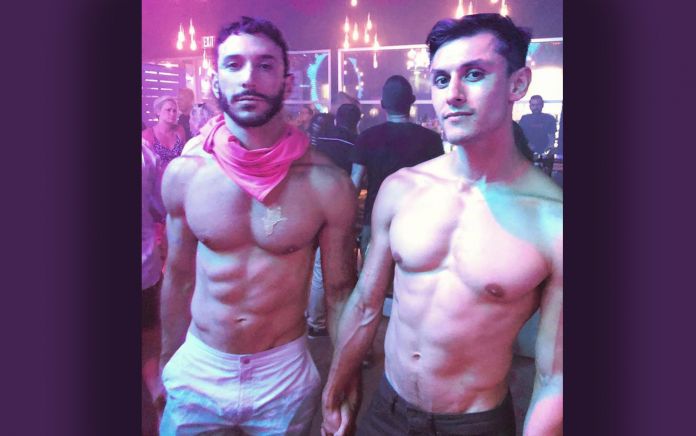 Boyfriends Jorge Muñoz and John Gavegnano, were mugged at gun point in West Hollywood last weekend, Saturday, July 21, at around 1:45am. The incident happened around the intersection of Huntley and Sherwood, between Santa Monica Boulevard and Melrose Avenue. Both men are West Hollywood residents and were walking home from the bars when they were rushed by two men dressed in black.

Muñoz tells WEHO TIMES the assailants were “two African American men, both around the age of late 20’s, or early 30’s. They were both dressed like thugs – wearing all black, baggy clothes. The one holding the gun was about 5’ 9”, maybe 300lbs and the other one was maybe 6’ 3” and weighed about 185lbs… from what I recall. Both had scruff, and short buzzed hair. No visible tattoos or piercings from what I could tell, although they were both wearing long sleeves.”

“The two men were walking toward John, and I on Huntley. They initially came up to us and the bigger guy said, ‘what’s up’ followed by him pulling out the gun, cocking it and pointing it as us, he then said, ‘give us your fucking wallets. NOW!’ Then my bf threw his wallet on the ground. I had a slower response, mainly because I was in disbelief of what was happening. I slowly gave my wallet to the taller guy, and they said, ‘what else do you have? Give me your phones! And then I defiantly said, ‘are you fucking serious?’ Which is the wrong thing to do, FYI. I am a fighter, not a flightier in those types of scenarios. Can’t help myself. The taller guy said, ‘yeah ni**a, I am serious. What’s up?’ He reached in my pocket and took my phone. Then I asked to have my driver’s license back. I did not want them to have my address, and dealing with the DMV is not fun. The shorter guy with gun the said, ‘I will mail it back to you on my daughter’s life’ while putting his right hand over his heart and still holding the gun with his left hand. They then said, ‘walk in the opposite direction, now!’ while still the pointing the gun at us. John and I both turned around and walked away. The perps jogged in the opposite direction. And about 100ft away yelled out ‘turn around and keep walking!” John was watching the entire time as we departed in opposite directions… mainly for our safety in case they decided to shoot, etc.”

Muñoz says that the West Hollywood Sheriffs acted swiftly. In a matter of minutes, police cars arrived at the scene after they were called. He says that around five minutes after giving their report, a second report was made from people a few blocks away who had also been mugged at gun point. The case has been assigned to a detective.

“John, and I are safe,” He posted on his Facebook timeline. “We talked a lot of it out. And in retrospect, the age old, ‘just materialistic things lost’ is a blessing in disguise. The perpetrators did get away. They apparently targeted multiple people that night. While John and I were reporting it to the police, within minutes they got a 2nd call from people a few blocks away saying they had just been robbed at gun point too. The perps clearly aren’t smart because we could track them from ‘Find my iPhone’… We gave the location to the police, so hopefully justice is served.”

Muñoz adds that he has been robbed before. His car has been broken into twice, about 4 years ago, but this was the first time he had ever robbed at gun point in a city where he always felt safe.

“Moving forward, always trust your gut,” he added. “If you don’t feel safe, don’t walk in the direction of uncertainty. It does not matter how affluent the neighborhood may be. There are unfortunately bad people everywhere.”

Muñoz offered WEHO TIMES readers the following safety tips that were passed on to him from several of his friend after being mugged at gun point:

1. For instances when going out at night, and you are not driving – get yourself a state ID with a faux address on it. That way if it is lost, or stolen, your address remains confidential.
2. Try and not carry cash on you, and only go out with one debit card, or Credit card that you can immediately cancel in worst case scenarios.
3. Walk in lit areas only if possible. Avoid alleyways, and desolate streets.
4. Walk with confidence, if you are alone. Stand up tall, and look at people in the eyes if you do not feel safe. Body language says a lot about your ability to defend yourself. If you carry yourself assertively, you’re more likely to intimidate people.
5. If you have to go down a desolate street at night, be street smart and always be aware of your surroundings. Have an escape route, and maybe a form of weapon in sight at all times, whether it’s a stone you can pick up or something to defend yourself with if you must.
6. If the perp is asking for materialistic things, just give it up. A life is not worth an iPhone, etc. Those things you can replace, not your life.
7. Lastly, trust your intuition. If your gut is telling you stranger-danger (no offense to other people) but walk away, turn around, walk across the street. Do whatever it takes to get to a safe spot until you see the coast is clear

“I did not trust my intuition this time, unfortunately,” he said. “I had a gut feeling about those guys that something did not feel right. But I did not want to be an ignorant person that stereotypes/profiles. Unfortunately, I was proven right that night. I am not changing my stance on how I feel about stereotypes, but I will proceed with more caution moving forward.”

Anyone with information on the two suspects who went on a crime spree last weekend are encouraged to call “Crime Stoppers” by dialing (800) 222-TIPS (8477), use your smartphone by downloading the “P3 Tips” Mobile APP on Google play, or the Apple App Store, or by using the website http://lacrimestoppers.org