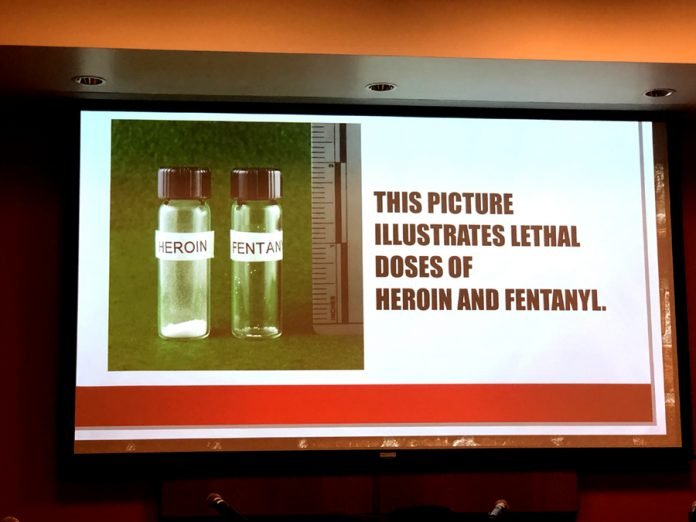 Safe WeHo Community Coalition is hosting a “Community Education on Opioids and Naloxane/Narcan” event on Thursday, August 22, 2019 from 1pm – 2pm, at the West Hollywood Library, located at 625 N San Vicente Blvd. The coalition is working with End Overdose to facilitate the training.

The purpose of the 45-minute-training is to inform attendees on how to recognize the signs of an opioid overdose. It will also teach the community about how to administer life-saving overdose-reversing medication Naloxone/Narcan.

The training comes in the wake of an increase of opioid overdoses in West Hollywood.

“This is something the Safe WeHo Community Coalition has been working on. We want to have more harm reduction resources in West Hollywood, especially things like fentanyl test strips and Narcan distribution,” Prevention Coordinator of Los Angeles County, Alexis Sanchez, told WEHO TIMES. “After a few high profile ODs in West Hollywood, we thought it was important to get Naloxone/Narcan into the hands of everyone and anyone. These overdoses happened in West Hollywood among people who were using drugs that were laced with fentanyl, unbeknownst to them, so they weren’t prepared with the tools to reverse the overdose.”

Sanches says the target audience for the event are bar employees, landlords, community organizers, or anyone who comes into contact with lots of people on a daily basis. The event is free and open to members of the community who are interested in learning more about opioids and how to reverse an overdose. All attendees at the event leave with a free dose of Naloxone/Narcan.

According to Safe WeHo Community Coalition, Naloxone distribution programs are firmly rooted in the principles of harm reduction. Harm reduction is the theory that even though we may not be able to immediately fix a problem as large as drug addiction/overdose, it is our moral obligation to reduce the amount of harm caused by it in the interim. The principles of harm reduction acknowledge the reality that drug use often continues despite prevention and treatment efforts, but work to reduce the overall amount of suffering to the greatest degree currently possible.

Treating substance dependence and abuse completely are the ultimate goals of substance abuse prevention efforts. The principals of harm reduction simply emphasize that, until that goal is achieved, every measure must be taken to prevent unnecessary deaths from occurring. Reducing morbidity and mortality through expansion of naloxone distribution programs responds directly to the epidemic of unnecessary opioid overdose deaths in the same way that syringe exchange programs respond directly to the spread of HIV. Just like CPR, having the knowledge and training to administer naloxone to someone who is overdosing can be the difference between life and death.

“According to the US Surgeon General, you’re more likely to encounter someone who’s overdosed and needs Naloxone than you are to encounter someone who’s had a heart attack and needs CPR,” Sanchez said. “My vision is for every public space that has an AED to also have Naloxone and to normalize and de-stigmatize everyone carrying it. One in five people will witness an OD in their lifetime, so we should all be prepared with the life saving knowledge and tools to reverse it.”

“My hope is we have a packed house of diverse sectors because that would mean more people leave with access to this life saving training and medication,” she added. “I think one overdose death is too many, and with fentanyl and other synthetic opioids making their way into party drugs like meth and cocaine it adds an increased risk as the people who don’t normally use opioids might not know what to do or how to recognize and opioid overdose. I know that getting this knowledge and doses of Naloxone out to the broad community will save lives.”

Safe WeHo Community Coalition meets the 4th Thursday of the month at Plummer Park. The coalition is working on other initiatives in addition to harm reduction measures and advocacy. Their mission is to save lives and limit the harm of drugs and alcohol on our community. To learn more, visit: Safe West Hollywood Community Coalition.