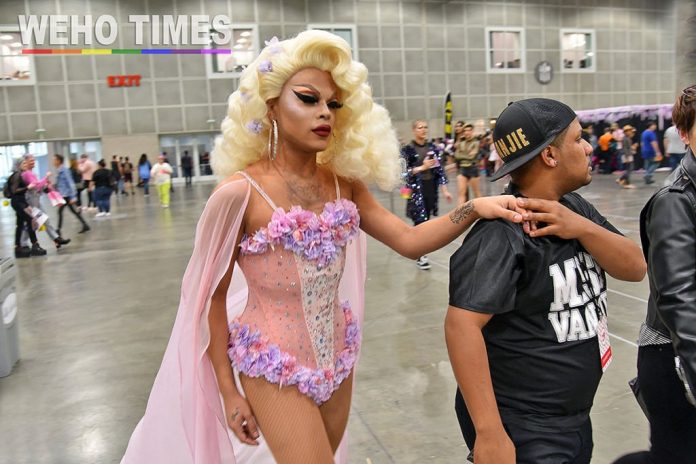 RuPaul’s DragCon slayed Los Angeles this past weekend. It was loud, bright and fast-moving, very much like RuPaul’s Drag Race, the show that took all things drag to the next level. According to reports, this year’s drag convention numbers broke records with over 50,000 attendees–an increase total attendance by 500 percent since its debut in 2015.

WEHO TIMES caught the action on Sunday, May 13. Last year’s Miss Congeniality Valentina, was her usual stunning self and a must see. Naomi Smalls was larger than life and could not take a bad photo (it’s like she’s made of plastic). Farrah Moan asked that we photoshop her accordingly after we took her picture, but that right there is another flawless queen. Latrice Royale could be seen taking a break with her wig snatched off at the back of her booth. We saw Tammy Brown. We skipped, BenDeLaCreme’s booth because all that sanctimony in this year’s All Stars didn’t add to much more than a quitter where we’re concerned and we don’t like quitters. Kim Chi looked edible. Chad Michaels looked like Cher. Monique Heart was all heart. We felt bad for Milk who didn’t draw the anticipated crowd, at least not on the last day of the convention. We missed Bianca Del Rio, who was there on Saturday. And Alyssa Edwards is still banking on her back rolls with the words Bank Rolls written on the train of her gorgeous gown. Then there were the sneaky Dragcon queens. We’re referring to the ones who didn’t allow you a sneak peek, unless you bought a picture, or a t-shirt and waited your turn in line. Alaska, Violet Chachki and Miz Cracker are among the ones who remained hidden behind a curtain or sealed behind a boarded up room, so you wouldn’t get any eye candy for free.

Hidden queens, sucked, but the biggest disappointment of the entire weekend has to be RuPaul, who showed up to RuPaul’s Dragcon as RuPaul Andre Charles and NOT as RuPaul Supermodel of the World. Seriously, how do you not do drag to your own drag convention? Not that it mattered to those who camped out for hours or paid upwards of $250.00 in VIP privileges to cut in line to take a selfie with Mama Ru. It is what it is. And she do how she do. Other highlights this past weekend include the efforts of the everyday queens who gave Drag Race queens a good run with their own stab at charisma, uniqueness, nerve, and talent. There was one baby drag/drag baby who was there in full shimmering drag with the support of his mother. He looked absolutely stunning.

But the biggest must-see-queen has to be the most memed queen in recent Drag Race herstory, Vanessa Vanjie Mateo, better known as Miss…Miss Vanjie. Miss Vaaahhnjee. MISS VANJIEEEE!!! We caught her on her way to her booth. She would not stop for a photo. She had merch to sell. Someone has to pay for that booth.

Below are some photos from the last day of Dragcon Los Angeles. DragCon NYC will take place September 28-20. Tickets are now available at rupaulsdragcon.com.