Rocco’s Tavern has leased the shuttered Citibank space on the corner of San Vicente and Santa Monica Blvd in the heart of WeHo’s Boystown.

Citibank abruptly closed this location in September of 2015 with barely a few days’ notice to depositors. The space has remained vacant for the past two years. Speculation was that a rent increase was the main reason for the closure.

Uber commercial broker, David Ashkenazy, the Senior Marketing Director of CAG (who also did Ken Todd and Lisa Vanderpump’s deal on the former Chi Chi LaRue space a few doors down) confirmed that Rocco’s Tavern and its spinoff Lounge Seventy7 inked contracts to lease the 4325 square foot space located at 8200 Santa Monica Blvd with a projected opening late in 2018.

Rocco’s Tavern is billed as a Sport’s Bar with and Italian themed Menu (think Buca di Beppo) and has four other locations throughout the Los Angeles area in Pasadena, Studio City, Culver City and Westwood.

The four Rocco’s Taverns are wildly popular with large followings of loyal sports fans who tout the food as “surprisingly really good even when sober.”

Happy Hours are beyond ‘Happy’ with 2-4-1 deals you can’t pass up, claim Rocco’s’ aficionados and sports fanatics.

Where are sports fans coming from in WeHo, we ask?

It’s hard to go past any of the Rocco’s without pausing to check one of the many games on the big screens of which there are dozens upon dozens.

The spin-off, Sevety7 Lounge has a roaring 20’s sexy speakeasy vibe and is described on their website as a “neo-classic cocktail bar/lounge that ushers’ memories of a bygone cocktail era” replete with a wooden peephole door, gold flocked wallpaper and Absinthe cocktails reminiscent of Belle Époque Parisian Cafes.

What was once simply WeHo’s Boystown is now a hub of restaurant activity, with a plethora of dining and nightlife spots.

On the same block there’s PUMP, and the future home of Bottega Louie’s 2nd location, a yet unnamed new concept by Ken Todd and Lisa Vanderpump and Beaches Gay Bar, along with the recently opened Catch LA just around the corner and The Halal Guys newest location diagonally across Santa Monica Blvd.

According to longtime West Hollywood resident and Public Relations Guru Phil Lobel at Lobeline Communications  “WeHo’s Boystown continues to expand as a nucleus of restaurant activity and has become the ‘go to’ location for LA’s dining and club experience.”

ZAGAT describes Rocco’s Old Pasadena location as a classic red-sauce Italian experience in a sports-bar setting, this laid-back haunt serves oversized pizzas and burgers and lots of beer. The crowd is game-day rambunctious, which ensures that the energy is festive and the noise level high.”

With a multimillion-dollar investment, an anticipated year of can a mega sports bar make it in WeHo’s still “gayish” Boystown, where mainstays like Millions of Milkshakes, Pizza Rustica and Citibank could not?

Mia Dinelly, Publisher of West Hollywood Lifestyle Magazine asks: “did you do the research or do you just want a city name with a zip code – it’s not that easy, says Dinelly but we root for all new businesses!

Rocco’s Tavern is banking on it. 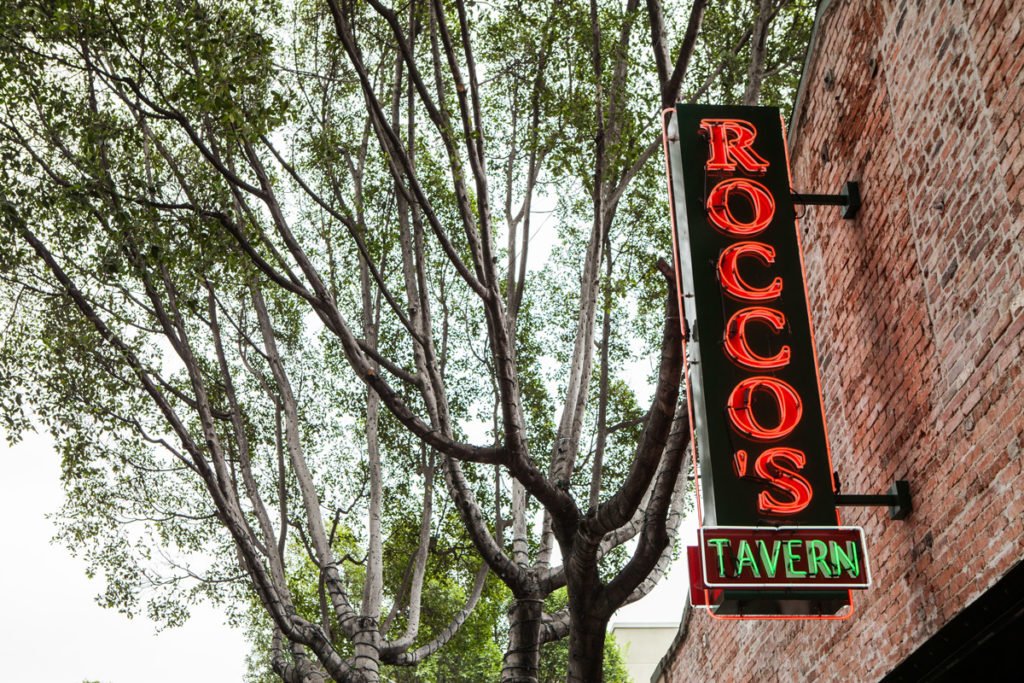