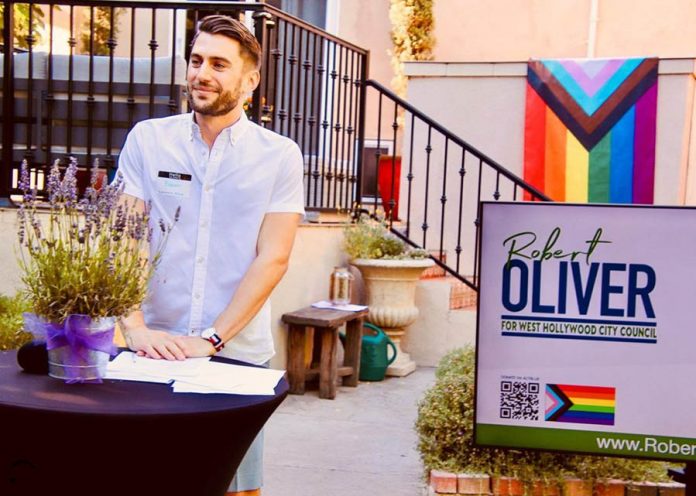 Robert Oliver conceded the race for West Hollywood City Council in the midterm General Municipal Elections on Tuesday, November 2022. In a statement posted on his social media, Oliver concluded his 2022 campaign and acknowledged that he came up short at .43% shy of winning one of three open city council seats. He also called the November election “fair and free” and a life-changing journey.

His full statement is below:

“In the closest election in WeHo history, we were only .43% shy, but we came up short. It’s now time to conclude my 2022 campaign for West Hollywood City Council.

At a moment when our democracy is threatened, I want to acknowledge this was a free and fair election. Each eligible voter’s returned ballot was validated and tabulated in a transparent process—the final count reflects their will. I had hoped for a different result, but I am proud of this campaign. Over the course of a year-and-a-half, we accomplished a lot.

I want to thank everyone who contributed their time, energy, and money. I asked a lot of my friends, and you stepped up, door knocking, calling voters, and digging deep when I asked you to donate. I will be forever moved by your generosity and support.

We built a remarkable coalition of workers, businesses, renters, homeowners, progressives, moderates, Democrats, Republicans, independents, and countless individuals representing the diversity of backgrounds and experiences that enrich our city. We received humbling endorsements, including the Democratic Party, Federation of Labor, Sierra Club, and city, county, state, and federal leaders.

I want to congratulate Mayor Lauren Meister and Councilmember-elect Chelsea Byers for their gracious campaigns, service to our city, and victories in this race. The third seat is too close to call with only 20 votes separating two dedicated and talented individuals. It was a privilege to share a stage along the campaign trail, and I’m ready to work alongside them to address the systemic, existential crises of homelessness, housing affordability, transportation, and public safety.

The road to this moment was not easy–running for office isn’t. What kept me going were our community’s tremendous shared values. We’re a compassionate, loving, and forward-thinking city, and we mustn’t allow anyone to distract from that. We will continue to fight for decency, equality, and change.

This has been a life-changing journey. It’s not the end of the story, but the conclusion of a chapter. More to come. Thank you for your unwavering support and encouragement, your belief in me, and, most importantly, your friendship.”