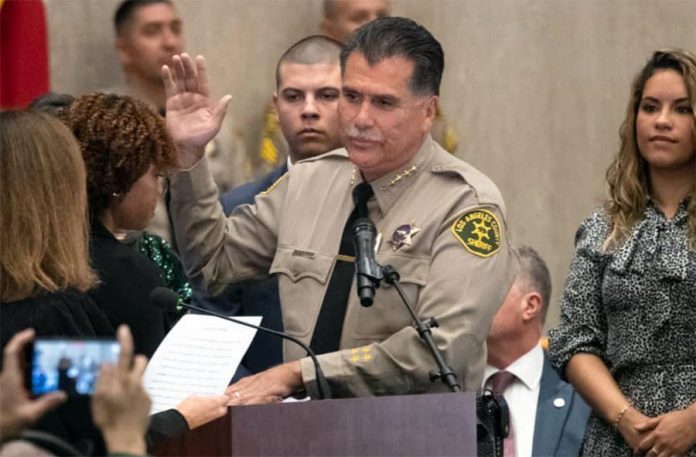 “It was a pleasure to meet in my office today with Sheriff-Elect Luna and discuss our peaceful transfer of power,” said Villanueva via the Los Angeles Sheriff’s Department (LASD) social media platforms. “I truly wish him the best in leading the greatest law enforcement agency on the planet. – Sheriff Alex Villanueva.”

Luna assumes command of the LASD on Monday, December 5th, 2022. The Los Angeles County Sheriff serves a four-year term. There are no term limits for the position. Luna served as chief of the Long Beach Police Department for seven years, having first been appointed to the position in 2014.

Growing up in unincorporated East Los Angeles, from a poor Latino immigrant family, Luna’s neighborhood was patrolled by the Sheriff’s Department. He saw examples of both good and bad policing, which inspired him to become an officer and shaped his philosophy on relationship-based policing specifically in communities of color.

​Luna understands that 21st century policing requires collaborative partnerships with community leaders, residents and government partners that tackle crime at the root of the problem and offer effective and lasting solutions to public safety. Luna has received various awards from organizations in Long Beach for his civic leadership and community engagement.

Luna started as a reserve officer in 1985 and has since been promoted within every rank of the Police Department. He was appointed Chief of Police in 2014 and recently served on the Major Cities Chiefs Association (MCCA) executive board, and is active with the organization’s Homeland Security Committee and the Police Executive Leadership Institute (PELI) mentorship program.

Luna is a graduate of the Federal Bureau of Investigation’s (FBI) National Executive Institute and National Academy, and Harvard University’s program for senior executives in state and local government, and the University of Southern California’s (USC) Delinquency Control Institute. Luna has a master’s degree in public administration from Cal State Long Beach.

Luna lives in Long Beach with his wife and has 2 adult children.

It would be fantastic if he showed up at the next city Council safety update meeting. He would show interest in our community, and probably simmer down the attitude that many have towards our local station. I don’t mean just show up, but talk about our local station, and our community. I know he’s got 1 million things to do that take priority over a visit to West Hollywood. But who knows?

Well, ever think that I wasn’t talking about you? I’m addressing community members who have had negative experiences with the LASD (the stories go on, and on, and on). I’m referring to the LASD keeping everything under wraps, such as: What actions were taken after the shootout at 939 Palm, which resulted in the death of an innocent person. He was shot and killed. What actions or review were taken for the LASD car that flipped over onto the sidewalk and killed a young person, landing right on top of him. Was an investigation done to determine why the LASD… Read more »

Well, ever think i wasn’t talking to you but to those that you feel have a negative experience with the LASD?

May he care more about the law abiding citizens then those that break the law and do us harm.