Richard A. McKay, Author of ‘Patient Zero,’ is Holding Discussion in WeHo 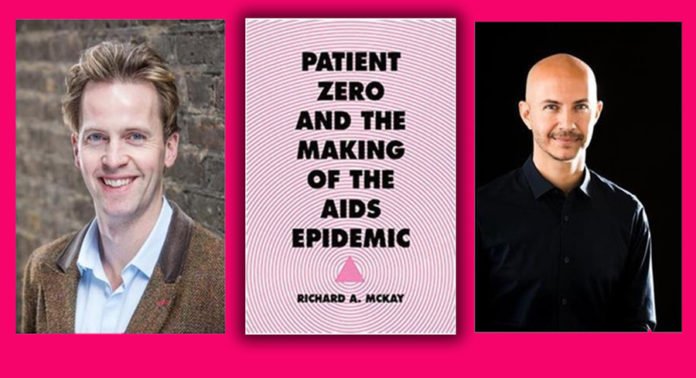 Richard A. McKay, the author of “Patient Zero and the Making of the AIDS Epidemic,” is holding a discussion and book signing at the City’s Council Chambers at the West Hollywood Library, on Wednesday, May 9 at 7 p.m. Former City of West Hollywood Poet Laureate Steven Reigns, will also join the conversation.

According to the book’s editorial description:

“In Patient Zero, Richard A. McKay presents a carefully documented and sensitively written account of the life of Gaétan Dugas, a gay man whose skin cancer diagnosis in 1980 took on very different meanings as the HIV/AIDS epidemic developed — and who received widespread posthumous infamy when he was incorrectly identified as patient zero of the North American outbreak. McKay shows how investigators from the U.S. Centers for Disease Control inadvertently created the term amid their early research into the emerging health crisis; how an ambitious journalist dramatically amplified the idea in his determination to reframe national debates about AIDS; and how many individuals grappled with the notion of patient zero-adopting, challenging, and redirecting its powerful meanings-as they tried to make sense of and respond to the first 15 years of an unfolding epidemic. With important insights for our interconnected age, Patient Zero untangles the complex process by which individuals and groups create meaning and allocate blame when faced with new disease threats. What McKay gives us here is myth-smashing revisionist history at its best.”

Originally from Vancouver, Canada, Richard A. McKay completed a doctorate in history at the University of Oxford. He is a Wellcome Trust Research Fellow in the Department of History and Philosophy of Science at the University of Cambridge. His research has been published in the Bulletin of the History of Medicine and in Nature, and he is currently investigating the pre-AIDS history of sexual health and illness among gay men, other men who have sex with men, and trans people: www.beforehiv.hps.cam.ac.uk/share. Patient Zero and the Making of the AIDS Epidemic is his first book and has been nominated for the Publishing Triangle’s Randy Shilts Award for Gay Nonfiction. He lives in London, where he also works as a coach for academics, writers, and other creative thinkers.

Steven Reigns is a Los Angeles-based poet and educator and was appointed the first Poet Laureate of West Hollywood. Alongside more than a dozen chapbooks, he has published the collections Inheritance and Your Dead Body is My Welcome Mat. He edited My Life is Poetry, showcasing his students’ work from the first-ever autobiographical poetry workshop for LGBT seniors. For over a decade, Reigns worked as a certified HIV Educator and Test Counselor in Florida and California. He has lectured and taught writing workshops around the country to LGBT youth and people living with HIV.

There will be a reception and author signing immediately following the discussion. The event is supported by Lambda Literary and Book Soup will have copies of the book available for purchase.

The event is free, but space is limited, so RSVP online through Eventbrite at: www.eventbrite.com/e/patient-zero-and-the-making-of-the-aids-epidemic-a-conversation-tickets-44436456638.