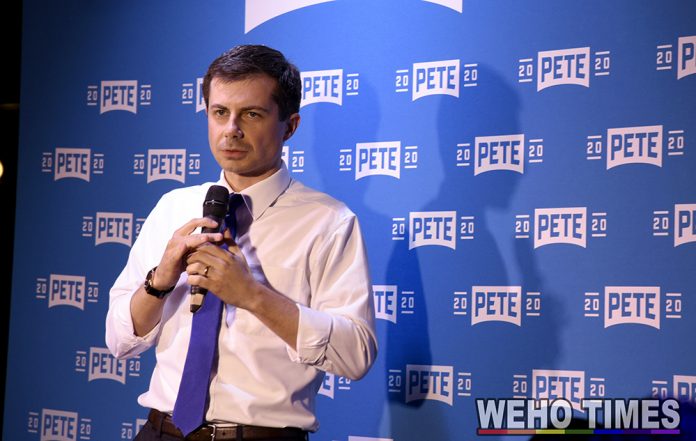 Revolver Video Bar is having an official Team Pete Democratic debate Watch Party in West Hollywood scheduled for tomorrow. The watch party will be in honor of presidential hopeful Pete Buttigieg (aka Mayor Pete). The event will be hosted by Billy Francesca, who will be there to present some special guests for the evening.

“As the holiday season is upon us, so is our next Democratic Debate before the upcoming primary,”  “Democrats have a lot of options. For me, Pete Buttigieg is simply the BEST! If you’re planning to watch the debate tomorrow, #TeamPete welcomes you to a Debate Watch Party in #WeHo:

We are proud to partner with Chris Miller & his whole team at Revolver Video Bar. (Thanks, Chris!) The one and only Billy Francesca is hosting, and we will have some special guest appearances!! This will be a great way to connect with other #TeamPete folks and watch the debate in style. All are welcome. 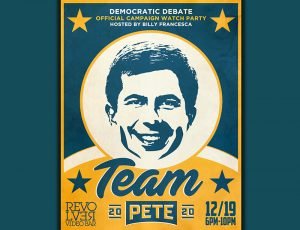 On April 14, 2019, Buttigieg announced his candidacy for the 2020 United States presidential election. He is the first openly gay person to seek the Democratic Party nomination, and has since built his campaign around the idea of generational change. Initially considered a long-shot candidate, he gained significant momentum in mid-2019 when he participated in several town halls, forums, and debates. As of December 2019, several media outlets consider him one of four “top-tier candidates”. He will be 39 years old on Inauguration Day, 2021.

This week’s debate is sponsored by PBS NewsHour and Politico. It is scheduled to run from 5 to 8 p.m. Pacific time. Doors open at Revolver Video Bar at 4:30 p.m. The debate will air live on PBS and CNN, and will be streamed through the media partners’ apps and digital platforms. It will be moderated by Judy Woodruff of PBS, Amna Nawaz and Yamiche Alcindor, and Politico’s Tim Alberta.