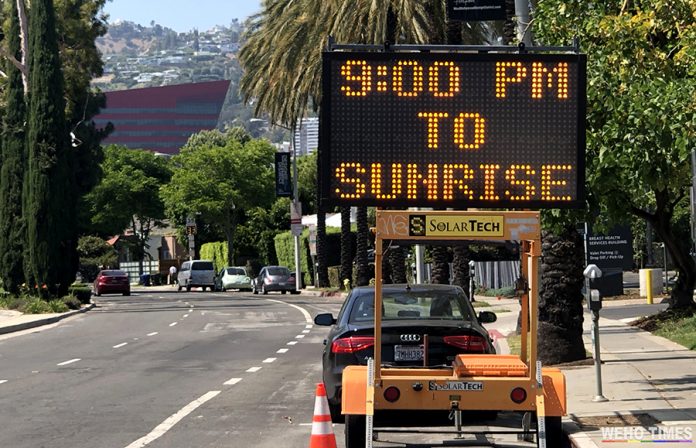 A West Hollywood citywide curfew has been revised to go into effect tonight, Wednesday, June 3, from 9pm to Thursday at sunrise.

“The City of West Hollywood has revised its Executive Emergency Order establishing a curfew. The curfew will be in effect this evening, Wednesday, June 3, 2020 at 9 p.m., ending at sunrise.

Note, earlier announcements were issued by the City of West Hollywood and by the West Hollywood Sheriff’s Station. The curfew was going to start at 4pm. It was moved to 6pm, before this latest announcement with the revised citywide curfew set to go into effect as of 9 p.m. to sunrise.

The curfew order states: “No person shall be upon the public street, avenue, alley, park, or other public place or unimproved public realty.” This curfew will remain in effect on a daily basis until such time as it is lifted. Members of the media and people traveling to and from work are exempt. The Los Angeles County Sheriff’s Department will enforce the curfew.

Residents should remain at home; hotel guests should remain safely indoors; and businesses should close in time for employees and patrons to be off the streets by 9 p.m.

The City of West Hollywood passionately supports the fight against racial injustice and the dismantling of systemic racism. The City respects the rights of peaceful assembly and protest. The City decries violence directed against persons and other acts that threaten public safety. The City’s curfew order is aimed at reducing the potential for violence, damage, threats to public safety, and civil unrest.

The City of West Hollywood encourages community members to follow @wehocity on Twitter and Facebook and Instagram and to turn on notifications for up-to-date information. For urgent updates via text message, text your ZIP code to 888-777. In an emergency, call 911. Stay safe and stay home.

For additional details about the curfew order, visit www.weho.org/curfew.