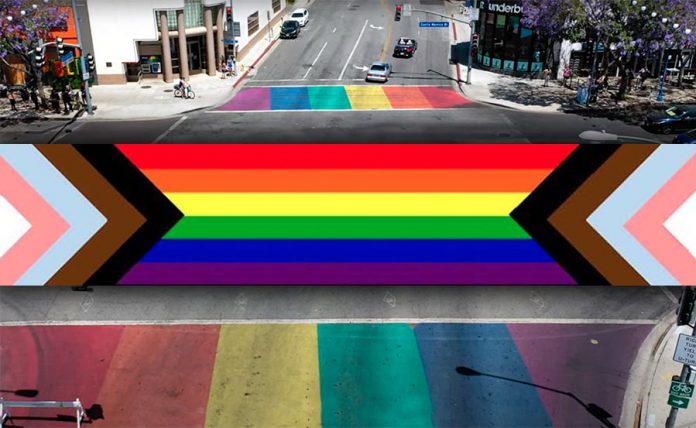 “Staff will begin work on the removal of the rainbow crosswalks and the re-installation of the Progressive Pride Crosswalk at the end of February at Santa Monica and [San Vicente],” said West Hollywood City Manager, David Wilson during his comments at a regular City Council meeting tonight. “The work is expected to last about three weeks.”

On December 21, 2020, the City Council directed staff to study the permanent installation of transgender colors in crosswalks located at a prominent intersection along Santa Monica Boulevard and to proceed with updating the existing rainbow flag crosswalks located on San Vicente Boulevard at Santa Monica Boulevard with the rainbow flag that is inclusive to all communities. As part of this directive, staff was asked to gather information from the Transportation Commission, the Lesbian and Gay Advisory Board (LGAB), and the Transgender Advisory Board (TAB) to identify a crosswalk location and return to Council with a recommended location for final approval. The City Council also, directed the Facilities and Field Services Division (Facilities) at its December 21, 2020, meeting to install the inclusive colors at the rainbow crosswalks at Santa Monica and San Vicente Blvd.

The Department of Public Works presented Council’s directive to identify preferred Transgender Flag crosswalk locations to the Transportation Commission, Lesbian and Gay Advisory Board (LGAB) and Transgender Advisory Board (TAB) and received various recommendations. Based on input received from the LGAB and TAB regarding the evolving Flag design, Facilities and Recreation Services postponed the directive to update the Santa Monica/San Vicente crosswalks until Council has an opportunity to review the various recommendations.

On July 7, 2021, the TAB recommended that the crosswalk at the San Vicente/Santa Monica intersection, be painted with the Pride Progress Flag, this intersection currently has the rainbow flag crosswalk. The TAB did not recommend having a specific Transgender Flag Crosswalk, instead the Board recommended adding the Transgender Flag colors to the existing rainbow flag crosswalk, via use of the Progress Pride Flag colors.

The Rainbow flag was installed on June 7, 2012, when the colors were painted over the brick crosswalk which garnered the name the Rainbow Brick Road by some residents.

However, permanent Rainbow Crosswalk we see today did not get installed until November 1, 2012.

EXACTLY!! Not to mention why is this a priority when there’s insane crime and homeless issues in this city???