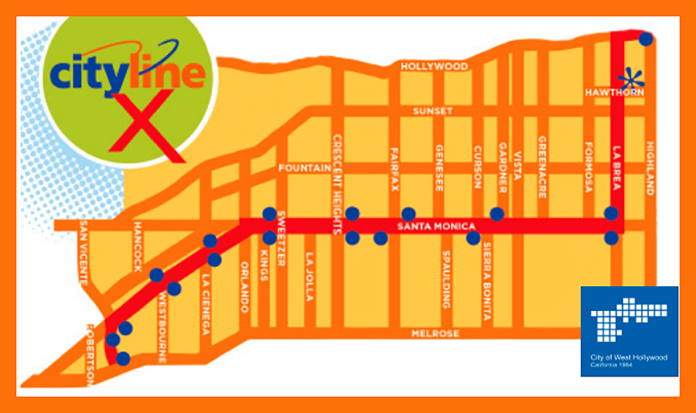 The City of West Hollywood is offering free mini-bus service for commuters that are scheduled to operate special services on Saturday, March 24, 2018 for the Los Angeles March for Our Lives Rally, which will take place in Downtown Los Angeles.

Attendees will organize at 6th & Spring/6th & Broadway at 9am, and the march will begin at 5th & Spring/5th & Broadway at 10am. CityLineX will connect West Hollywood residents to the Metro Red Line at Hollywood and Highland. Event attendees can use the Red Line to reach the Pershing Square/5th Street Station. The March is expected to conclude by 2 p.m., but may be extended due to number of participants. The March and Rally will take place rain or shine.

View the CitylineX March for Our Live Route Map [PDF]

The first CityLineX shuttles will depart at 7:30 a.m. from stops at the West Hollywood Library located at 625 N. San Vicente Boulevard, and from Santa Monica Boulevard and Crescent Heights. A second CityLineX shuttle departure from the West Hollywood Library is scheduled to depart at 8:20 a.m. In addition to the shuttles coming from the library, stops from Crescent Heights east will have additional service with runs starting at 8 a.m. and 8:30 a.m. All times are approximate; passengers should allow several minutes leeway to allow for varying traffic conditions. CityLineX will pick passengers up at its regular stops along Santa Monica Boulevard, which include San Vicente, Westbourne, La Cienega, Sweetzer, Crescent Heights, Fairfax, and La Brea, en route to the Metro Red Line Station at Hollywood & Highland. March for Our Lives attendees are advised to use Metro Red Line service toward Downtown Los Angeles and exit at Pershing Square/5th Street.

CityLineX returning shuttles will bring people back from Hollywood & Highland at approximately 30-minute intervals beginning at 2:30 p.m., with the final shuttle scheduled to leave at 4 p.m. Passengers may board from the CityLineX stop located on the west side of Highland Avenue, south of Hollywood Boulevard. CityLineX will drop-off passengers at all of its regular stops along Santa Monica Boulevard, which include La Brea, Gardner, Fairfax, Crescent Heights, Sweetzer, La Cienega, Westbourne, and San Vicente, en route to its final stop at West Hollywood Library.

For more information about CityLineX, including links to schedules and maps, visit www.weho.org/cityline.