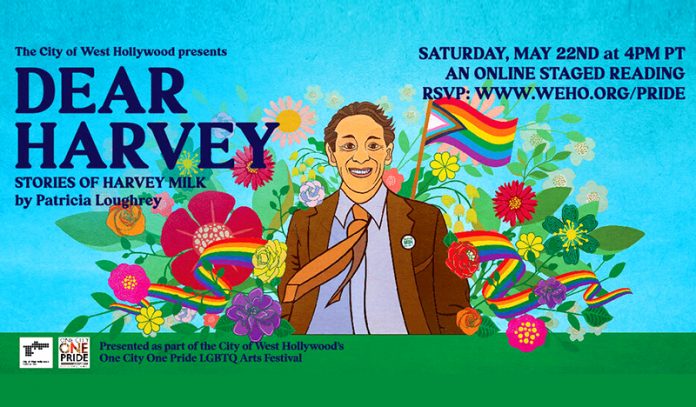 One City One Pride LGBTQ Festival kicks off Saturday, May 22, 2021, City of West Hollywood’s reading of the Dear Harvey play – The Stories of Harvey Milk by Patricia Loughrey. The online event is free. It becomes available on the WeHo Arts YouTube channel starting at 9 a.m.

Extensively researched and beautifully constructed, this documentary-style ensemble play recounts the life and lasting impact of groundbreaking LGBTQ activist and politician Harvey Milk, as told by the people who knew him best… the real-world figures whose lives were forever altered by Milk’s too-short career. This spirited play reaffirms his impact and the continued relevance of his campaign towards equality, three decades after his assassination.

Harvey Bernard Milk was the first openly gay elected official in the history of California. He was elected to the San Francisco Board of Supervisors. He served almost eleven months in office, during which he sponsored a bill banning discrimination in public accommodations, housing, and employment on the basis of sexual orientation. The Supervisors passed the bill by a vote of 11–1, and it was signed into law by Mayor George Moscone. On November 27, 1978, Milk and Moscone were assassinated by Dan White, a disgruntled city supervisor.

There will be a special welcome from Stuart Milk, nephew of Harvey Milk, and the West Hollywood Mayor and City Council.

The 2021 theme for One City One Pride LGBTQ Festival is For the Record – LGBTQ stories of the past that have often been hidden or undocumented. One must read between the lines to find stories hidden behind “beard” marriages, coded language, and erased or destroyed evidence. This year, One City One Pride looks at some of these previously hidden stories.