RAW SEX IN THE CITY 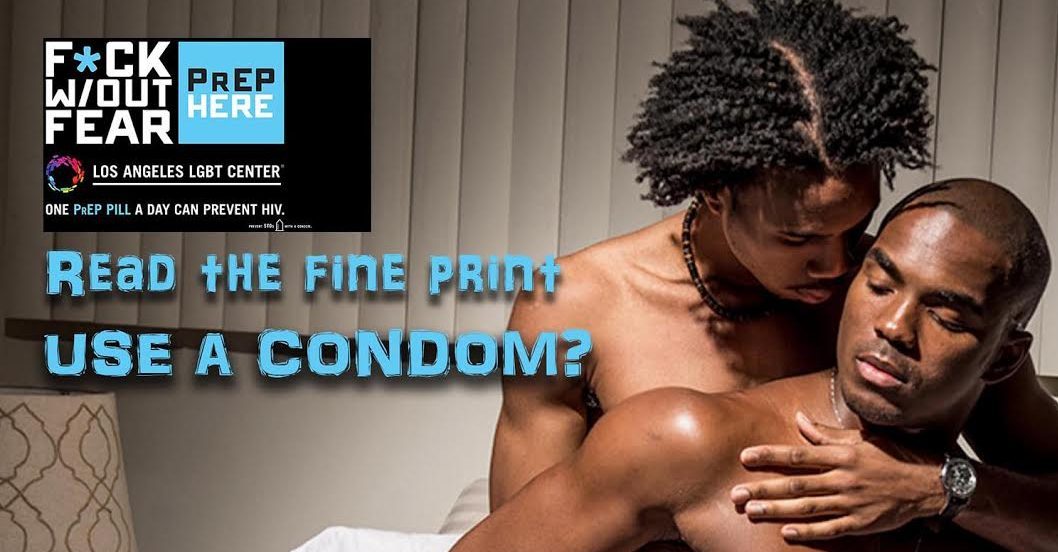 Go ahead, F*ck without Fear, declare the sidewalk canvasses.

Fear of what? STDs? No. You’re on your own in that department.

How to obtain this blessing? Buy a pill (the doctor’s office will “help you afford it”).

The campaign by the Los Angeles LGBT Center officially launched on Sunday, January 8, to raise awareness for pre-exposure prophylaxis (PrEP) as a safe and publication, tool to prevent HIV infection.

The attention-getting sidewalk paintings advertising the campaign with a barely-disguised “F*ck” (an asterisk disguises the word from eight-year-olds’ inquiring minds and offers parents a chance to come up with a good replacement vowel for u) propose, as the Center’s press release says, to end HIV transmission.

According to the Centers for Disease Control (CDC) PrEP involves taking a medicine once-daily that their studies show lower the risk of HIV infection by up to 99 percent.1

Researchers and community-based health care experts say HIV can be conquered using PrEP. Not so with STDs.

“It’s widely believed that a two-pronged approach is what will be most effective at ending the transmission of HIV in the U.S.,” Robert Bolan M.D., Los Angeles LGBT Center chief medical officer said in the program’s announcing press release.

“Quickly linking newly diagnosed HIV-positive people to care can reduce or eliminate the risk they can transmit the virus; it’s the same treatment effect for people who have been living with HIV for a while or a long time,” he said.

Strategists believe that by beginning with that treatment component (of those already infected) and adding a preventative component in those not yet infected, but at high risk of obtaining the infection, they can hobble HIV.

Said Dr. Bolan, “Then if HIV-uninfected people who are most at-risk of infection successfully protect themselves from the virus, we can effectively end HIV transmission here.”

The campaign focuses on those most at risk of HIV, who are gay and bisexual youth of color and transgender women,2,3  as a recent study by APLA Health of young gay and bisexual men revealed that Latino and African-American youth are the least likely to know about PrEP.

Fewer than 10 percent of those populations using PrEP4.

The press release asserts that “Without immediate intervention, the U.S. Centers for Disease Control and Prevention estimates that one in two gay or bisexual black men and one in four gay or bisexual Latino men will be infected with HIV in their lives.5

The press release states, “Those who do know about PrEP frequently have misconceptions about it, including the belief that it’s not effective or safe and that it’s unaffordable.”

The Center’s sex-positive F*ck w/out Fear campaign uses what they termed “raw, real language to get people’s attention and spur conversation.”

“We’ve got the tools to not only end the fear of HIV but to end it as an epidemic. Those at risk have to know about the tools, though, and they need honest information about them,” said Center Chief of Staff Darrel Cummings.

He noted that PrEP is now covered by most insurance plans and for those who are uninsured, the Center can help make it affordable through patient assistance programs.

After a free PrEP consultation, which can now be scheduled online, most people will be able to leave with a prescription.

The Center also makes transportation assistance available for those who don’t live close to the Center’s facilities in Hollywood and West Hollywood.

In an acknowledgment of cultural reticence to use condoms, specialists hope to make the “One-a-Day” pill a silver bullet. “Because the availability of condoms alone hasn’t been enough to stop HIV, we’re excited about the promise of PrEP,” said Dr. Bolan.

Yet the campaign’s press release admits that PrEP alone fails to prevent Sexually Transmitted Diseases guaranteed to make you unhealthy.

“Our campaign provides the truth about PrEP, the information and support to help people get a prescription,” said Mr. Cummings, who added, “and a reminder that condoms are necessary to prevent other sexually transmitted diseases.”

There, say public health advocates, is the rub.

According to their release, public health officials in the country found 1.5 million cases of chlamydia, almost 400,000 cases of gonorrhea, and nearly 24,000 cases of syphilis.

New York Magazine noted, “In terms of cases per 100 people, these figures represent increases of 6 percent, 13 percent, and 19 percent, respectively since 2014 — the previous record year.

“Americans aged 15 to 24 accounted for almost two-thirds of the chlamydia cases and half of gonorrhea cases. The majority of cases of gonorrhea and syphilis were among gay and bisexual men.

“The CDC noted that that the increases could be due in part to the erosion of STD-prevention systems: More than half of state and local STD programs have experienced budget cuts.

“But it’s also possible, wrote the magazine, “that improvements in the treatment and prevention of HIV have led people to believe they don’t need condoms.”

And that idea, that a “Once-a-day” PrEP provides youths armor enough to “F*ck “Without Fear” raises concerns in the public health community

One such advocate, Michael Weinstein, condemned the CDC’s relaxing efforts to promote condom use as the single most effective way to prevent the spread of HIV and STDS.

“Given the CDC’s shift away from promoting condom usage and cuts in STD prevention funding, it is no real surprise that STDs are skyrocketing around the country, particularly among young people and men who have sex with men,” said AHF President Michael Weinstein.

“Sadly, it also appears that individual and organizational complacency has set in regarding condoms, which remain the best way to prevent most STDs. We call for additional urgently needed funding for STD prevention and for the CDC to really step up and develop an innovative, aggressive national STD prevention campaign.”

A close look at PrEPHere.org, the campaign website, includes an online tool to help gay and bisexual men determine how strong a candidate they are for PrEP.

Based on data collected from people who have tested for HIV at the Center and from research published in the peer-reviewed journal Sexually Transmitted Diseases, the short quiz helps users determine their “PrEP score” and make a more informed decision about whether PrEP is right for them.

The campaign plans various events and grassroots advertising, in Spanish and English, to reach those most at risk, including: The campaign to end HIV through PrEP (is it a wonder that people don’t know what all these acronyms mean?) rests now on the sidewalks drumming up news items and discussions, and the Center plans to push the discussion as far as possible.

Advocates for condoms will argue that PrEp works – for preventing HIV – and so too do condoms, with the added benefit of preventing not only HIV but also a wide panoply of STDs that could cause serious health issues if not treated.

Others will argue about whether or not F*ck Without Fear ought to grace the city’s sidewalks (apparently a billboard sits prominently on Santa Monica Boulevard as well). Some will find offense, and others will find in that advertisement – a way into talking about the subject and not the word.

The world turns. People will F*ck. How safely? We each get to decide. Let’s hope we know enough to decide well.

To learn more about the F*ck w/out Fear campaign, PrEP, and to book a free PrEP consultation online, visit PrEPHere.org.

2 Centers for Disease Control and Prevention. HIV in the United States: At a Glance. Updated December 2016. Available at: https://www.cdc.gov/hiv/statistics/overview/ataglance.html. Accessed December 28, 2016.

Ryan Gierach began his career with Frontiers Magazine and has seen his work published by The Writer Magazine, USA Today, Mashable, The Centers for Disease Control, In, Out, Advocate, Genre and The Atlantic. As a historian, he wrote two books published by Arcadia Publishing, Images of America: West Hollywood and Cedarburg: A History Set in Stone.

[…] WEHO TIMES asked the Los Angeles LGBT Center why the sidewalk ads don’t mention HIV/AIDS? Jim Key, the Chief Marketing Officer of the LGBT Center, responded: “All of our other campaign materials include the line ‘one PrEP pill a day can prevent HIV.’  The sidewalk murals are really an artistic representation of the campaign, in a limited amount of space, designed to grab the attention of people who are walking by and intrigue them enough to visit our website to learn how they can “f*ck w/out fear.” […]