West Hollywood Mayor John Duran, announced today that the Rainbow flags in West Hollywood’s Boystown are flying at half mast because of the recent loss of WeHo resident and former Revolver Bar manager Caesar Torres, who was found dead in his apartment on San Vicente Boulevard, some time in the early morning hours of Saturday, September 22.

“The Rainbow Flags in historic Boystown WEEP at half mast today. Because we lost Caesar Torres.” Duran posted on his Facebook Timeline. “Friend to so many of us. The HERE Lounge. The Revolver. The nightlife in Weho. Companion. Laughter. Good times. Don’t ever think that we are not all Interconnected [sic] in this time and space in West Hollywood. Some of us don’t have biological families anymore . So we created family. Caesar – you did that. You created a family. And we are broken hearted at losing you and wondering why? RIP. We grieve for you deeply. We care for one another now. And the City weeps.”

Torres was known and loved by many who remember him fondly in the community. He has been a fixture in the WeHo nightlife dating back to 2001 when he started working at Here Lounge, the bar that took over the space which used to be The Firehouse; Here then became The Chapel–the current sister bar to The Abbey Food & Bar founded by David Cooley.

Many in the community have gone to social media to express their sorrow over this recent loss. This includes his former boss, the owner of Revolver Bar, Chris Miller, who posted the following photo on his Instagram account. 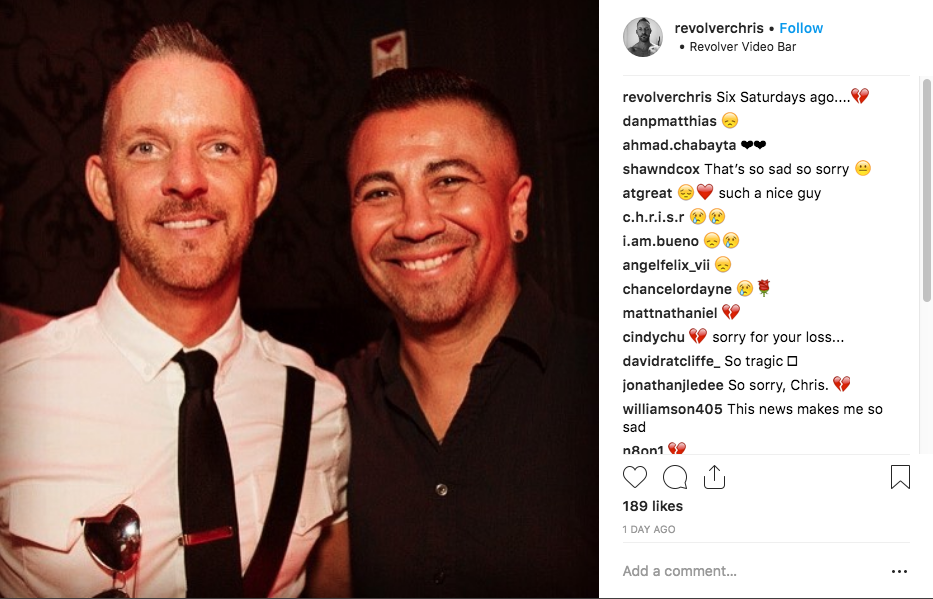 There have been a lot of speculations around the cause of his death, but none that have been confirmed at this time. Though it’s been reported that he died Friday night, his last Facebook post was on Saturday at 12:40am.

He left his Facebook friends and followers with these final words regarding the state of West Hollywood–the city that he loved dearly.

Caesar Torres was warm and welcoming and always willing to help. He was very instrumental in setting up WEHO TIMES’ Go-Go Dancer of the Month photo shoots during his tenure as manager at Revolver Video Bar. He was always on hand to adjust the lighting at the shoots and was always willing to provide us with a go-go dancer to feature. We at WEHO TIMES are sadden by his loss and send our condolences to all of his family and close friends.