Radiant Health Centers invites everyone to put their pedals to the pavement for a good cause and ride for a reason with the 9th Annual OC Ride for AIDS (OCRA) this fall, on Saturday, October 27. The event, taking place at the Civic Center Plaza in Irvine, is Radiant Health Centers’ one-day ride that helps raise funds to support the organization’s services and programs offered to those living with HIV in the community.

This year’s ride offers four routes that make a huge loop around Orange County through Santiago Canyon. It includes a 10-mile (Family Ride) and 30-mile (Fun Ride) routes that start at 9:30 a.m., and a 62-mile (Metric Century) and 100-mile (Century Ride) routes that start at 7 a.m. Riders will cycle past stunning vistas and the iconic scenery that makes up Orange County. There is an uninterrupted 12-mile stretch with no stop signs or street lights, with a lot of it taking place along the Pacific Coast Highway.

“Each year we receive an overwhelming amount of love and support at OCRA,” said Phil Yaeger, CEO and executive director, Radiant Health Centers. “We couldn’t be more thankful for the community’s support and advocacy to ending the HIV epidemic in Orange County. The lifesaving programs and services we offer wouldn’t be possible without it.” 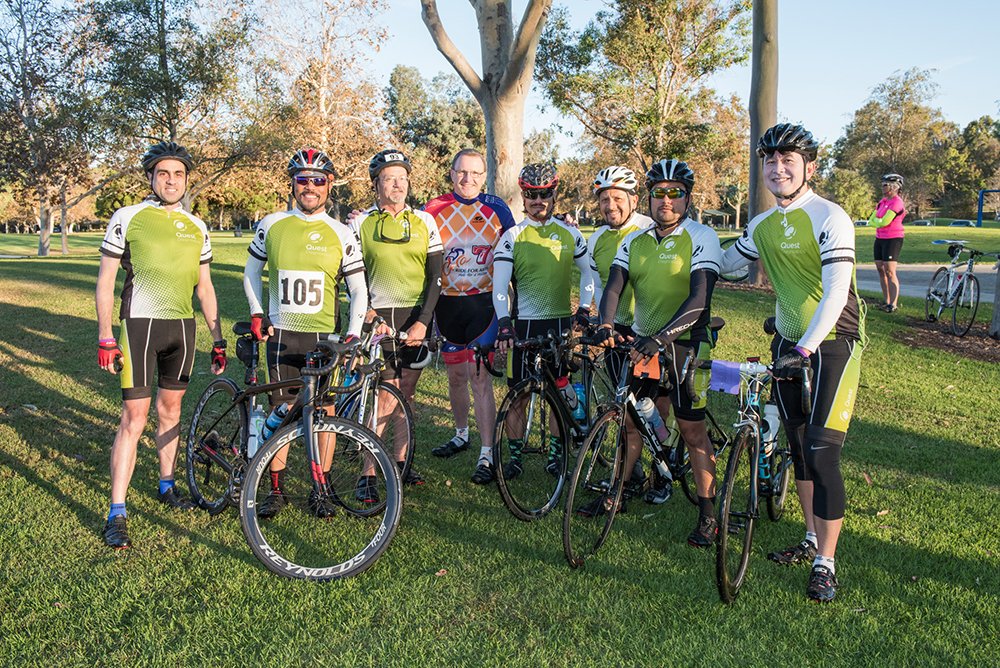 Longtime OCRA rider, RHC board member and former board president, Duane Vajgrt, says the OC ride, like the AIDS Lifecycle that travels from San Francisco to Los Angeles, is personal to everyone who participates.

“A lot of us who do the ride, it is often in memory of friends that we lost,” he told WEHO TIMES. “For me personally, my husband lost his best friend to AIDS. We went to see him in San Francisco and to our amazement, his parents, who we knew from all having been roommates–when we told them he had full-blown AIDS and he needed to come home to have someone take care of him, they just basically disowned him.”

Vajgrt and his partner moved their sick friend into their home and took care of him until his final days.

“It was only because of the care that was rendered by then AIDS Services Foundation, which was rebranded to Radiant Health Centers, that we were able to keep him with us at home for about nine months, until eventually he passed away,” he said. “So for me, it was sort of payback and give back by being on the board for the care that ASF had rendered our friend.”

Vajgrt has ridden the OC Ride for AIDS for the nine years that Radiant Health Centers has been producing the ride. He is proud to be the highest individual fundraiser for the last eight years. He says it’s due to the continued support from friends, family, and work colleagues who recognize his commitment to end the AIDS epidemic in Orange County. He rides with Team Spirit, which is named in the spirit of one of the originators of the ride, David Wood, who died of pancreatic cancer within a year of the first ride. Team Spirit wear jerseys with purple collars, which is the color for pancreatic cancer.

According to Vajgrt, OCRA began with cyclists in Orange County who participated in the AIDS Lifecycle while they were on the board of directors of what is now Radiant Health Centers. They got together with a cycling club called Team OC that was training people to ride the ALC and that is when OC Ride for AIDS was formed. Team OC has been instrumental in training people for the ALC from January to June and in the first weekend after the Fourth of July, they start training for OCRA for the past nine years. 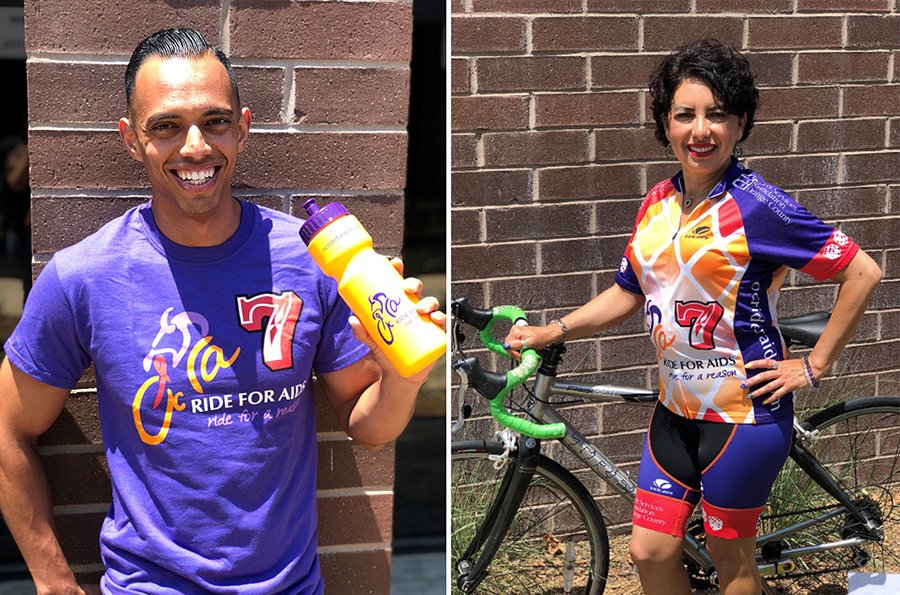 “In terms of Team OC and the Ride, the one thing that really stands out to me is the sense of comradery that there is and Team OC’s, which is, ‘No Rider Left Behind,'” he said. “They really make a point of embracing everybody at every skill level to train up, and truly, you can be a novice, or hardly ever ridden a bike. If you train with them during the summer, they’ll have you prepared to do the full century 100 mile. To me, they are so impressive and so giving. We have a training ride every weekend.”

“At the end of the day, you’re going to feel a real sense of accomplishment,” he added. “You’re going to have fun having done so with a group of really committed people who are really good souls. For riders, one of the big benefits is that we have massages at the end of the ride and those are always very welcome.” 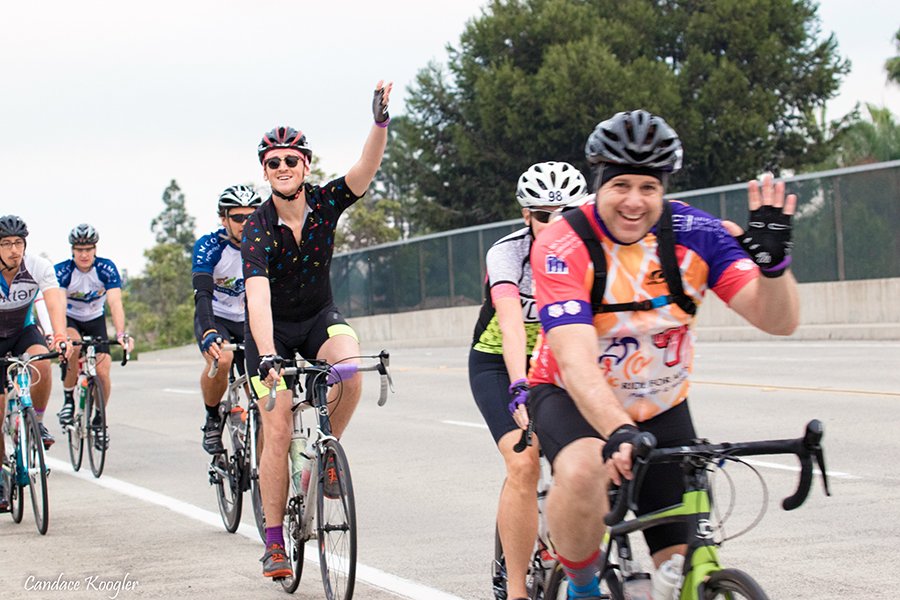 There are nearly 7,000 people living with HIV in Orange County today, which is enough to fill the Orange County Fairgrounds Grandstand. While it is no longer a life sentence, people with HIV must take costly medications every day for the rest of their lives and face great stigma. Many will require mental health services and support to cope with this stressful and isolating diagnosis. That’s why events like OCRA are crucial for raising funds to help those living with HIV and their families.

There is $50 registration fee for the OC Ride for AIDS, which will launch each rider’s fundraising effort toward their required goal of $125. 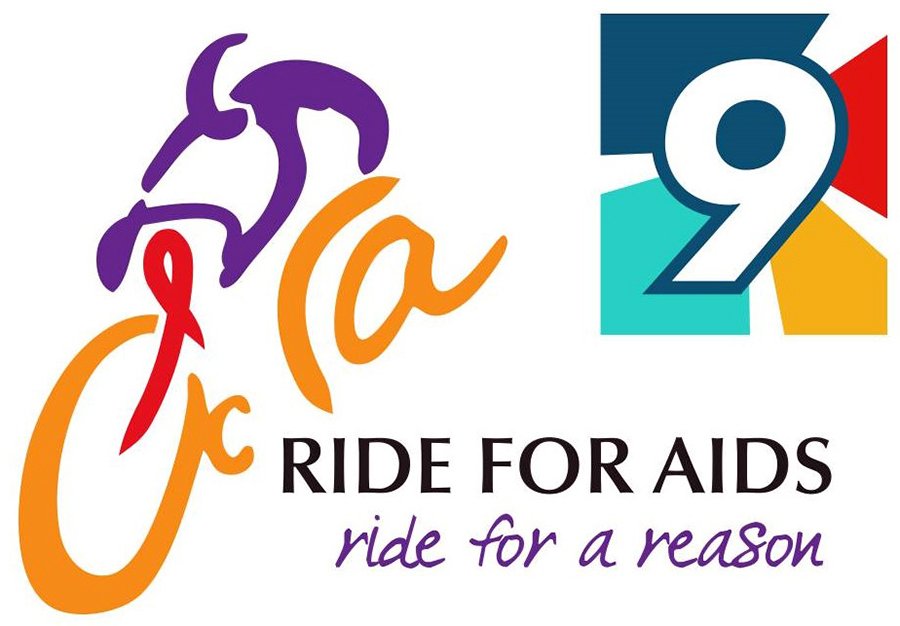 For more information about the OC Ride for AIDS, call Chair of OCRA committee Marieanne Burley at 714-907-3269 or visit www.ocrideforaids.com.

Radiant Health Centers has provided more than three decades of exceptional care and support to people affected by HIV and their loved ones. It has been instrumental in driving new HIV transmissions down over the past 15 years; however, six people a week in Orange County are still diagnosed with HIV. Radiant Health Centers encompasses traditional HIV testing and prevention outreach as well as long-standing services to Orange County’s HIV-positive community while also creating a safe space to help more members of our LGBTQ+ community in need of compassionate care. Learn more at www.radianthealthcenters.org.