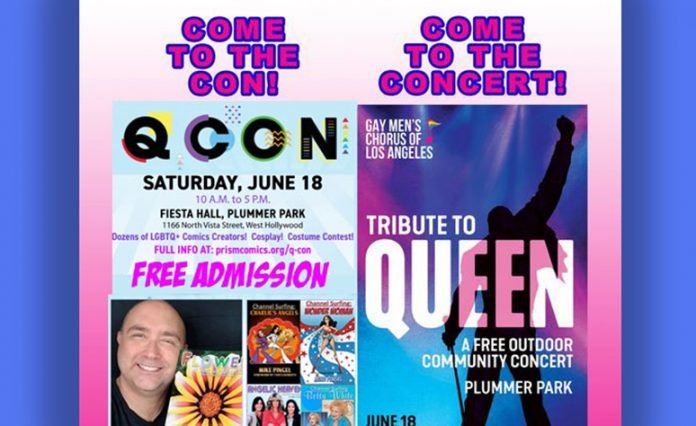 Q Con, the queer comic convention and a Queen concert by the Gay Men’s Chorus are both coming to Plummer Park this Saturday, June 18, 2022. Both events are open to the community and free to attend.

Q Con is supported by a grant from the City of West Hollywood’s Arts Division as part of the City’s WeHo Pride LGBTQ Arts Festival (May 22 – June 30). More info at weho.org/pride and and follow at @wehoarts.

Q Con is family friendly and free to the public, giving pre-teens and adults the opportunity to find a wide variety of comics and graphic novels affirming LGBTQ+ representation at one exciting colorful event. The queer space will celebrate the amazing diversity of LGBTQ+ comics, games and popular media today and feature creators from indie comics, to major publishers. Meet creators, get autographs and sketches, and mingle with other comics fans. Cosplay is strongly encouraged. Enter the Q Con Costume Contest for fun and prizes.

Members of the Gay Men’s Chorus of Los Angeles will sing a selection of iconic songs from Queen and Freddie Mercury on Saturday, June 18 at 4pm, Plummer Park. The Queen concert will include We Are the Champions, Somebody to Love and We Will Rock You are among the best pop/rock anthems ever written, and the Chorus brings them to life as you’ve never heard before in this special free one-hour concert. GMCLA Music Director & Conductor Ernest H. Harrison will conduct the Chorus. For reservations visit www.gmcla.org.

This project is supported by a grant from the City of West Hollywood’s Arts Division as part of the City’s WeHo Pride LGBTQ Arts Festival (May 22 – June 30). More info at weho.org/pride and WeHo Arts

I will be there