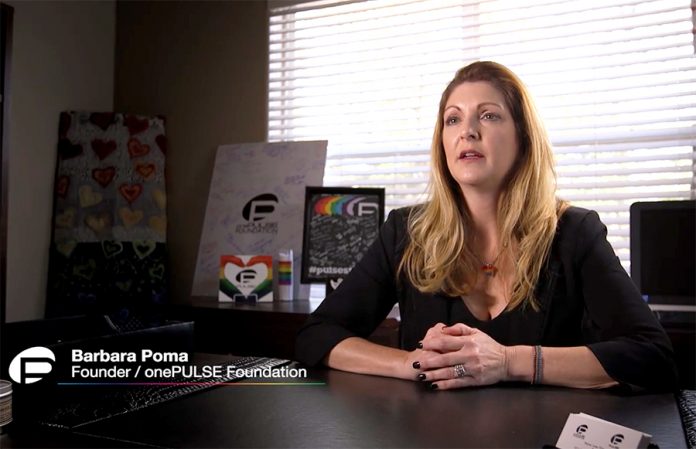 Today marks the one year anniversary of the Orlando tragedy. On June 12, 2016, a lone gunman claimed the lives of 49 people and injured 68 others during a Latin-themed night at Pulse Nightclub. The terrorist attack rocked the entire LGBTQ community and shocked the world.

In recognition of the one-year anniversary, multiple services are being held throughout the country. U.S. flags around Florida are flying at half-staff and church bells throughout the Orlando area rang 49 times to recognize the 49 who were lost. Trump even took the time to express his condolences for the victims via a short Tweet. A closed ceremony was also held shortly after 2 a.m. this morning that was privately attended by survivors, victims’ families, club employees and local officials. 2 a.m. is around the time that the gunman started shooting people inside the nightclub. WEHO TIMES caught up with Pulse Nightclub owner Barbara Poma for an interview. Poma was in Los Angeles for a fundraiser to support onePULSE Foundation hosted by David Cooley, the founder of the Abbey Food & Bar in West Hollywood.

OnePulse Foundation is a nonprofit 501 (c)(3) that was established to support the construction and maintenance of a memorial. Community grants will care for the survivors and the victims’ families, and scholarships will honor the 49 lives lost.

Poma expressed that she has days that are better than others a year after the tragedy. She, along with the survivor’s and the victim’s families, continue to look towards healing.

Are you staying in West Hollywood right now?
Yes I am. I was here last year in August. I’ve been to L.A. quite a bit. It’s always a nice place to come visit.

How are you today, a year after the tragedy?
I think we’re all really working towards a healing initiative at some point. Some days are better than others. It’s very difficult to say. Every day is a little different. You don’t know what’s going to happen and what’s going to affect you that day. We are certainly trying to look towards the future and look towards healing.

What stands out for you most after the Orlando tragedy?
There isn’t one specific, but I can tell you that just receiving all of the mail, and the pieces of art, and the poetry, and the songs, and the message of love, and their messages of their Pulse Story. There was an overwhelming outpouring of love and support from around the world. I think that was the most impactful that I can remember.

From your observation, how has the LGBT community changed in Orlando in the past year?
I can’t speak for the entire gay community. I can only speak for the circle of people that I know. They’re all changed. Everything about how they lived has changed. They think differently when they’re out. They definitely have become closer because of the tragedy. Many hearts and minds have been opened and changed, which is amazing—not just in our city, but around the world. It definitely affected the LGBT community around the world, not just in Orlando. I think everyone felt the exact same heartbreak that the locals did.