Venice Beach artist Joel Shields went rogue and installed a guerrilla style Pulse memorial art exhibit at the old Rage Nightclub this past weekend in honor of the victims of the Pulse Nightclub shooting.

Shields wanted to commemorate five years since the mass shooting on June 12, 2016, when a lone gunman claimed the lives of 49 people and injured 68 others during a Latin-themed night at Pulse. The terrorist attack rocked the entire LGBTQ community and shocked the world.

The art installation was a display of portraits of each victim from the Pulse massacre with a short bio. They were originally lined on the floor, but the artist felt it was disrespectful, so he placed them on rainbow-colored display stands at the patio in front of the shuttered Rage space this past Saturday and Sunday at 8911 Santa Monica Boulevard.

Shields says he did not ask permission to set up the art installation. Aside from one individual who questioned what he was doing, claiming he worked for Rage, he was left alone to display his portraits in honor of the victims.

“I had these installed in front of my apartment five years ago in Venice Beach,” he told WEHO TIMES. “I thought I would bring them here to West Hollywood.”

He says he drove to West Hollywood Saturday evening without knowing where he would display the memorial.

“I saw the basketball courts at the park and thought they were well lit and there is a fair amount of foot traffic, but then I turned the corner and found this empty space at Rage.” he said. “Lord knows, I have plenty of Rage stories. We all have graced the Rage. There was a lot of debris, so I cleaned it up and this space has been great. No one is going to throw me out for putting up a Pulse memorial.” 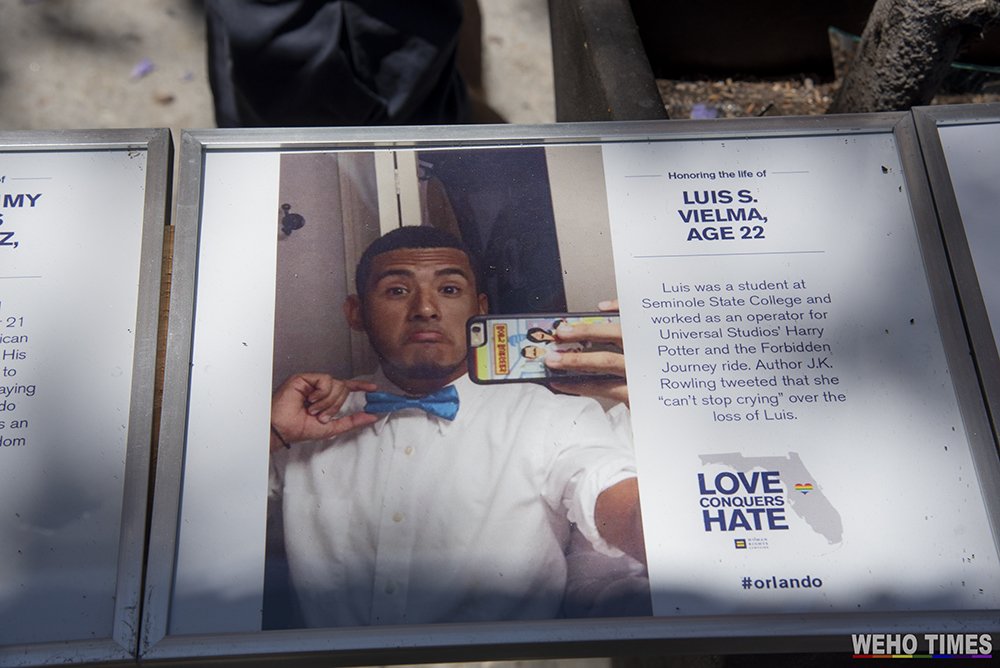 He said the reactions from the public were intense. “I can’t stand around and talk without getting too emotional. I wasn’t there. I didn’t know anyone personally but I was just affected deeply.”

A similar Pulse Memorial was also up at the Venice Beach boardwalk where the Shields lives. It will also be part of a pop-up installation in San Diego at the Hillcrest district.

The artist did want to acknowledge the Human Rights Campaign (HRC) who created these Love Conquers Hate portraits to be shared with the entire world.

“I’d be remiss in not acknowledging and thanking the Human Rights Campaign,” he said. “They put together the portraits and bios five years ago. I tip my hat to them. Everyone uses the same set and I think HRC should win a Pulitzer Prize for it.”

Kudos to Paolo Murillo and WEHO for capturing this story. Joels’s work is a gift to the community. In this specific instance it resonates deeply.