Home News Public Safety Awards are Coming to WeHo, May 14 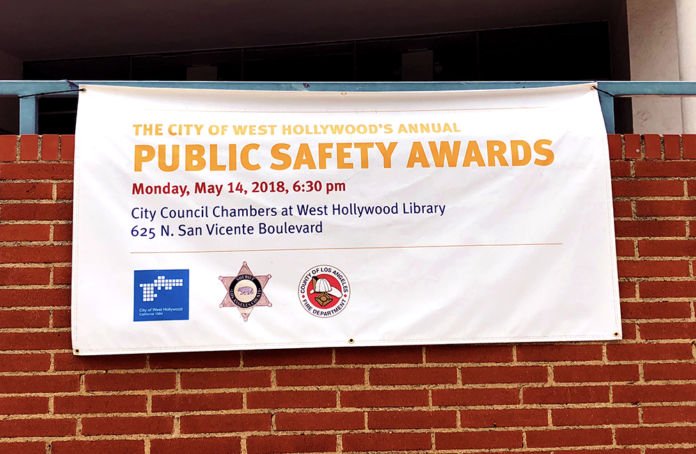 The City of West Hollywood invites community members to take part in this year’s Public Safety. Each year, the Public Safety Awards are an opportunity to recognize individuals, groups, and businesses that have made significant efforts towards enhancing public safety in West Hollywood.

The three Public Safety Awards to be presented this year are:

Award recipients have made extraordinary efforts to volunteer for public safety programs or events; have made efforts at strengthening law enforcement and community partnerships; have dedicated many hours of service to the Sheriff’s Department or Fire Department; or have demonstrated leadership in any variety of ways that have contributed to a safer community.

The Public Safety Awards will take place at the City of West Hollywood’s Council Chambers/Public Meeting Room, located at 625 N. San Vicente Boulevard on Monday, May 14, 2018 at 6:30 p.m. There will be an awards presentation with light refreshments afterwards. Admission is free; no RSVP is required. Validated parking will be provided in the adjacent five-story structure, accessible from N. San Vicente Boulevard.

WeHoTV will broadcast the 2018 Public Safety Awards. WeHoTV is available to Spectrum (formerly Time Warner Cable) customers within the City of West Hollywood on channel 10. AT&T U-verse customers across Southern California can access WeHoTV on channel 99. Coverage will also be available for live streaming and on-demand replay on the City’s website at www.weho.org/wehotv and on WeHoTV’s YouTube Channel at www.youtube.com/wehotv.