Proposed Beverly Triangle Plaza Gets a Nay from Community Members 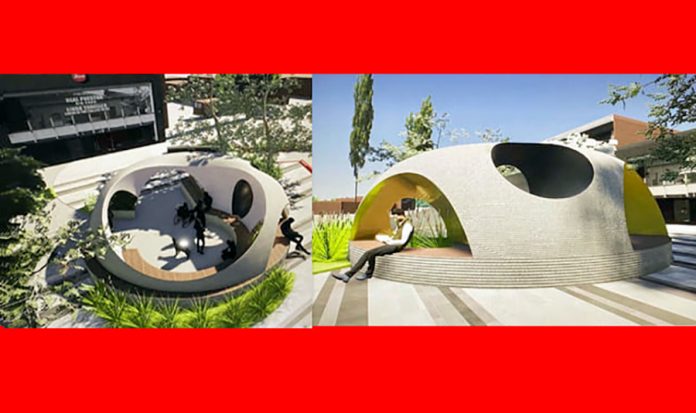 The proposed Beverly Triangle Plaza seating sculpture and art installation (also known as the Beverly Bonner Gathering Space) received a majority thumbs down at a community meeting yesterday, Monday August 9, 2021, where residents and businesses were be able to speak directly to city staff and offer their opinions and suggestions.

The proposed project, abutting the former Coffee Bean and the Leica store on the northeast corner of Robertson and Beverly, would redesign roughly 5,000 square feet of public space with new landscaping, shade, seating, and public art. It will also retain nearly all the existing parking spaces.

“At yesterdays community meeting for the proposed Beverly Triangle Plaza (aka Beverly-Bonner Gathering Space) the majority of attending residents once again said no to the “seating sculpture”.

The “seating sculpture” referred to by residents as something from a “70s Si-Fi film” or similar to a freeway overpass was the main objection to the plan.

Not only was the design considered to be inappropriate for the site, residents also expressed concern about the potential for loitering in the enclosed structure.

City staff asked attendees to suggest improvements to sculpture. But that was met with suggestions for a fresh start, a clean slate and criticism that the city hasn’t listened to residents.”

The proposed seating sculpture and art installation for this project was also not received well by attending residents and businesses at a recent West Hollywood Arts and Cultural Affairs Commission.

The project will also be reviewed by the Public Facilities Commission this Wednesday, August 11 at 6:30pm.

For information on how to make comments and/or attend that meeting, click on the Weho City link: http://cms6ftp.visioninternet.com/weho/packets/pfc/pfc.htm

For any questions, or to submit any general comments about the project, contact David Fenn, Associate Planner, at dfenn@weho.org or (323) 848-6336.

Back to the drawing board. Design with the realities we face. And design to make the sitting area part of the park/green space and not isolated from it. This design would have been a horrible choice.

I’m going to reiterate what everyone else is saying about this piece. It will be a homeless paradise. Makes one wonder if the people designing it have any clue about what is going on in the world with our homeless problems. It’s a nay for me as well.