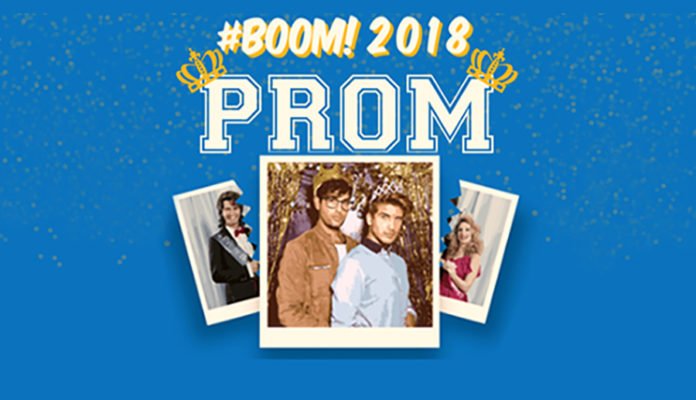 It’s a prom to remember at #BOOM! 2018! The city of West Hollywood is hosting its premier sober New Year’s Eve Party for the fifth year.

A night at BOOM#! comes complete with a DJ, dancing, food, photo booth, balloon drop and an alcohol-free toast at the stroke of midnight, with none of the drunken messiness one can sometimes encounter during amateur hour on New Year’s Eve. The alcohol and drug-free event brings hundreds of people together for a fabulous celebration that is completely FREE!

“#BOOM! has been successful from year one,” West Hollywood Human Services Commissioner and founder of The Tweaker’s Project Jimmy Palmieri, tells WEHO TIMES. “It’s probably the most successful New Year’s Eve party in the city. There is no cost. It’s open to the public. We invite everyone, sober or not. It’s just an event that is alcohol free. It’s one of the safest and one of the most fun parties you can go to. You don’t want to miss it.”

Pull out your polyester suits and dust off those wigs, because this sober New Year’s Eve party theme is “A PROM TO REMEMBER.” Dress in your prom best and be the king or queen you always wanted to be. The best dressed prom person gets a chance to participate in a costume contest. Get your prom picture taken and get a gorgeous corsage tattooed on your skin from Hollywood body painting artist Marky Make Up.

“I’m happy to see people who I don’t think ever had the opportunity to go to the prom,” Palmieri added. “We have some LGBT who may have left school and were home schooled because they were bullied. This will be their chance to attend a prom no matter what age they are. It’s a heartstring-tugging thing. I think it’s one of the best ideas, I’m a little partial. I think they are all great ideas.”

This sober New Year’s Eve party is sponsored by the City of West Hollywood, the Institute for Public Strategies, the Los Angeles LGBT Center, the West Hollywood Project, the Tweakers Project and APLA Health. Admission is free. You must be 18 years or over to enter.