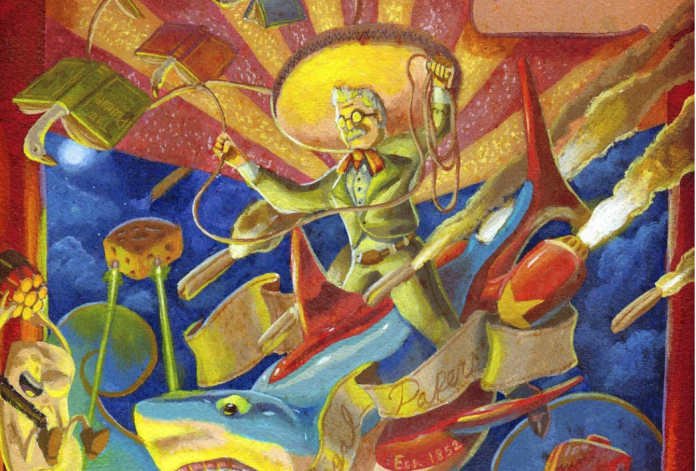 The City of West Hollywood’s Plummer Park is set to bring the production of Señor Plummer’s Final Fiesta to the stage on October 19. The award-winning site-specific immersive theater experience will be brought to life by Rogue Artists Ensemble. Señor Plummer’s Final Fiesta celebrates the life of Eugene Plummer, a champion of community in yesteryear Los Angeles and a prominent figure in what is now known as West Hollywood.

Told through a patchwork of tall-tales, large-scale puppets, masks, and music, the performance includes a merry band of ghosts and shadows who will sweep audiences into a past filled with wild west duels, pirates, land-grabs, violent mobs, shark-riding, romances, epic court battles, and, of course, fiestas as it weaves whimsical tales of early Los Angeles in a memory map that reflects back to the late 19th and early 20th century communities of our modern city.

Imagine yourself in 1942 receiving an invitation to the book launch of Señor Plummer: The Life and Laughter of an Old Californian, Plummer’s (mostly) true account of his life in early Los Angeles. You arrive in the newly dedicated Plummer Park, only steps away from where Plummer himself has lived since 1877. From Señor Plummer’s darkest nightmares to his most luminous joys, you will be armed with only a treasure map of Señor Plummer’s mind. The adventures you encounter are not always friendly, not always logical, but always exist in the vibrant, mysteriously shifting heart of this original resident of West Hollywood.

Audiences will not only experience a multitude of stories from Plummer’s past and the history of Los Angeles, but they will also be able to pick and choose which paths and characters they follow. Audience members will have the chance to interact one-on-one, learn from the characters, and be a part of the story themselves. With so many possibilities and stories to explore there is no way one can see the entire show in one night. Everyone’s experience will be unique, helping to encourage community dialogue and hopefully do the very thing Plummer wanted, which was to bridge the divide between communities.

Señor Plummer’s Final Fiesta commemorates the 75th anniversary of the publication of the book Señor Plummer: The Life and Laughter of an Old-Californian. The book, first published in 1942, documents interviews with Eugene Plummer by John Preston Buschlen.

Ticket prices range from $35 to $55 and include options with drinks provided by Angel City Brewery. Pay-what-you-can preview performances take place on October 12, 13, and 14. Please note that Señor Plummer’s Final Fiesta is rated PG-13; it includes mature content and is not intended for young audiences.

To purchase tickets and for more information, please visit the Rogue Artists Ensemble website at www.rogueartists.org.

Señor Plummer’s Final Fiesta is a commission by the City of West Hollywood with additional support from the NEA and the Puffin Foundation. Sponsors include Angel City Brewery, Wells Fargo, MedMen, and the Leonis Adobe Museum.