ALL OUT POLITICS: My Name is the GOP, and I’m a No-aholic 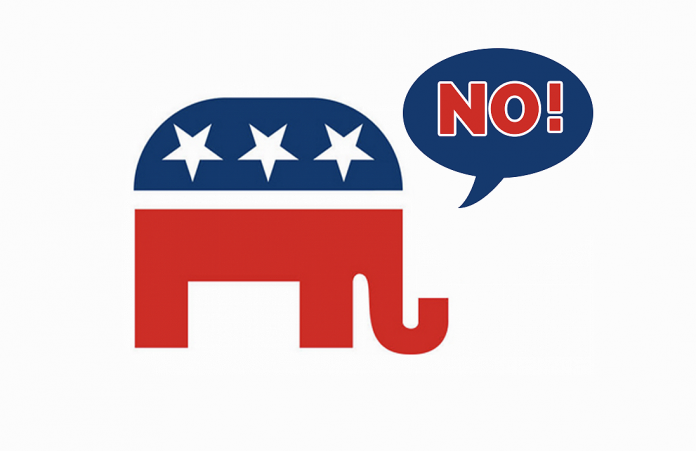 The Party of No learned how hard it can be to shake a bad habit last week. This week, 32 million Americans wait to see if the GOP’s bad habit of saying no to everything good will take away their access to health care.

They have reason to fear the GOP’s contrarian addictions. After all, most Republican politicians still say “no” to marriage equality, “no” to a higher federal minimum wage, “no” to better environmental regulations and “no” to other sound, people-oriented policies.

Like opioid or meth addictions, habitual misuse of pure, perfunctory contrarianism can be hard to stop cold-turkey. Sure, the GOP wants to start saying yes—especially now that its political life may depend on kicking the habit of compulsive naysaying. But after nearly a decade on the stuff, it’s hard to stop just saying “no, no, no!”

So entrenched in obstructing everything of governance is the party of Mitch McConnell—and let’s be honest, the GOP is now as much defined by the Senate majority leader’s pseudo-Machiavellian ploys as it is by Donald Trump’s schizophrenic whims—the once-pragmatic party has twisted itself into something politically grotesque.

After the most recent volley of GOP health care legislation debacles, it’s hard to look at the party’s run away ideological mutations. They heave to and fro in both houses of congress and across town at the White House.

Yet we must now watch as Mitch McConnell’s forces his will to make good on Republicans’ promise to nullify as many as 32 million Americans’ access to health care. Obamacare, which a vast majority of the country now sees favorably, may still fall to the naysaying ax of the GOP as debate begins on the Senate floor to repeal it.

Listening to the words of the president and legislators in the House and Senate, it’s easy to see why so many Americans have stopped complaining about Obamacare and are now beginning to ask, “what exactly are the Republicans trying to do to my family’s access to health care?”

The GOP built their whole reason for being during the Obama presidency on just saying no. Count some of the ways in which saying no in recent years has both satisfied GOP politicians’ contrarian cravings, while also setting in motion outcomes that cause them to need more ways to say no in the future:

One is never enough.

The foundation for the one big “success” of the Trump era was laid on a bedrock of negation. Even before Trump took the White House McConnell had said “no” to the long-established, constitutionally prescribed orthodoxy of how to fill a vacant seat on the Supreme Court of the United States. Soon after Trump’s inauguration, Republicans crammed into the seat formerly held by the late Justice Antonin Scalia, Neil Gorsuch, a corporation-favoring judicial right-winger. For some time to come, the denial of a Senate-confirmation hearing for President Obama’s nominee, a judicial moderate, named Chief Judge Merrick Garland, will taint 5-4 decision in which Gorsuch’s vote made the difference.

But saying no to the supremely qualified Chief Judge Garland wasn’t enough epic naysaying. Once the seat was safely snatched away from the D.C. Circuit Court of Appeals chief judge and by extension, from the American people, the GOP needed more unprecedented negation in order to swear in the Republicans’ man-of-choice for the black robes of high justice.

Sen. Mitch McConnell’s unsavory seat-saving in 2016 set the scene to mandate his pushing of  the button on the so-called “nuclear option.” It was the ultimate act of advise-and-consent contrarianism. In order to push Gorsuch into Supreme Court, McConnell ended the traditional 60-votes threshold previously required to confirm a Supreme Court nominee.

Sure, the Republicans got what they wanted. And while it was simultaneously pleasing to them and too much of the Republican base, the cost was high. The next time a Democratic president wants an ultra-liberal Supreme Court justice to fill a vacancy, it won’t take much effort legislatively. Even better for the Dems, they won’t take any heat politically for changing the rules to get what they want. The GOP already did.

But I believe there’s another cost. Republicans, who for so long have done business in Washington almost solely by obstruction—by saying no—have built up so much political muscle memory that they’ve become a one-trick pony whose reflexive answer to everything is to just say no. They are knowingly or unknowingly “no-ing” their party and our country into what I call inertial chaos or chaotic inertia, whichever you prefer. Don’t get me wrong; I’m grateful to a handful of kinder, gentler and smarter Republican senators, including Sen. Susan Collins (R-Maine), who said no to a still-lurking exercise in cruelty called the “American Health Care Act,” aka “Trumpcare.

“Grateful” is not exactly the right word for how I feel about the other self-obstructing GOP legislators, such as Sen. Rand Paul (R-Kentucky) who last week foiled their own party’s mean-spirited bill, not because they cared so much about those who’d lose access to health care under AHCA, but rather because they cared too much about blindly adhering to the principle of saying no to any government “intervention,” i.e., engagement, in fixing the 50-year-old, private sector-created mess that is the American health care system.

Ironically, it will take wrongheaded-yet-helpful votes of senators’ like Paul to save Obamacare from repeal now.

Ask anyone over 65 who would argue against my contention that the private sector created the mess that is the American system—most agree it was even worse before Obamacare—how they like their Medicare, a government-run program, they’ll tell you they like it a lot.

How the “government-can’t-do nothin’-right” crowd squares that contradiction is something I’ll never understand.

My point is, and certainly I’m not the first to make it, that if the Republican Party could pull itself out from under the rock of denial—I know, bad metaphor; denial’s supposed to be compared to a river in Egypt. If Republicans could only free themselves from their addiction to naysaying, maybe they could actually look at the issue of health care in a constructive, meaningful way aimed at making it work for more Americans. Don’t we deserve that much?

But listen to their own admissions. No one needs a columnist, an expert or a policy analyst to reveal the fact that any Republican replacement of the Affordable Care Act would at best be an afterthought to the new Holy Grail of contrarian GOP politics, which is REPEAL!

At worst, as was the case with the first Senate bill, a Republican replacement for the Affordable Care Act is apt to be a not-so-thinly disguised tax cut for very wealthy people, and a death sentence to some of the most ill and neediest among us.

In municipalities and at state legislatures, most of the nation’s Republican elected officials tow a party line with a purpose. Can anyone explain with a straight face what is the purpose of Mitch McConnell’s and the president’s strategy vis a vis “Repeal & Replace” or “Repeal and do Nothing” versus their “Let Obamacare Collapse” plan, versus “Repeal & Replace I, II, III, and IV?”

Maybe then-President Barack Obama put it most succinctly back in October 2016. Trump was trying to pass himself off as a friend of working people and an enemy of global elites, despite his decades-long campaign to be accepted as a global elite. To quote the former president: “Come on, man.”

If the Republican Party wants to hold onto power, it’s got to face the truth: The GOP is addicted to saying no and doing nothing for the American people. The first step toward recovery is admitting there’s a problem.

All Out Politics is a monthly, nationally syndicated column about the political life of the American people, written by veteran journalist, Thom Senzee through a nominally LGBTQ-centric lens. Send comments to info@lgbtsinthenews.com (Exclusive syndication available in certain geographic areas.)