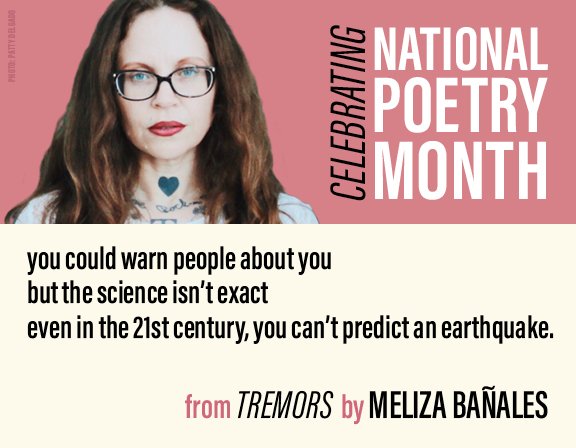 Meet poet Meliza Bañales. She’s one of five poets who are showcased at The West Hollywood Gateway, for Poetry Month 2022. Located at 7100 Santa Monica Boulevard, The Gateway continues to support poets each year on the main digital billboard at the courtyard.

Meliza Bañales is a writer, performer, and slam poet. She has lived in the San Francisco Bay Area, Santa Cruz, and Los Angeles. She has been involved in spoken-word and writing since 1996. She gained recognition for being the first Latina on the West Coast to win a poetry slam championship in 2002.[2] She was the 2002 winner of the People Before Profits Poetry Prize. Her poems have appeared in many magazines and anthologies, including Revolutionary Voices: A Multicultural Queer Youth Anthology, Without A Net: The Female Experience of Growing-Up Working-Class, Baby Remember My Name: New Queer Girl Writing, and Word Warriors.

Poetic works:  Say It With Your Whole Mouth, 51 Poems About Nothing At All, Adventure Awaits You In Hell, and forthcoming in Fall 2022 Root For the Underdog

What can you tell us about the excerpt on the billboard? I wanted to reflect on two important elements in LA: earthquakes or natural disasters and survivors, another kind of natural disaster; as a survivor myself, especially of childhood sexual abuse April is not just National Poetry Month, it is also sexual assault awareness month. I felt it important to speak to both as poetry has helped me to continue healing from abuse as well as made me appreciate the fragility and strength of survivorship. Like an earthquake, survivors can be unpredictable. But like a quake, they are strong, powerful, and force us to listen.

Does the West Hollywood Gateway or WEHO have significance for you? Absolutely. As a Queer Femme of Mixed Identity to be in WeHo is special because this is the safest place in LA for me– it remains a bedrock of safety, acceptance, and LGBTQIA culture. I was first published in The Lesbian News at 18 in 1996. To be from a Chicano Family, Queer, and Femme from LA makes these intersections provocative for poetry and important for visibility, I think. I remember when I had to find out about Queerness in the 80s and 90s by sneaking around in the library, looking in books. Now there are entire sections of LGBTQIA books and literature on the shelves and I am on the shelf now too. That is incredible progress to me.

When and how did poetry find you? I had an English teacher in my South LA high school recognize my writing, his name was Mr. Mike Hoeger. He noticed a number of us liked poetry and spoken word but we were all from the hood and couldn’t make it to coffee shops for poetry readings (in the early 90s that’s all there was!). He would take us, give us honest critique of our work, and give us books we could not get in school. He also encouraged me to apply for CSSSA (California State Summer School for the Arts) at CalArts and I got in, to my amazement! I was 16, 1994, and I went that summer and 1995. That was a big seed, someone noticing me and pointing me in the right direction.

What has been a big poetry career moment? When I was Grand Slam Champion, appeared on NPR, and read with Alice Walker all in the same year. That was a great year, 2002!

What has teaching writing meant to you? It has meant that words matter, words are currency, and there is a way out of pain and into freedom. Writing is a symphony of skills in harmony: speech, thought, and expression. It has meant listening more than speaking and being a guide so that the student or writer can make their own path.

How can people find out more about you and your workshops? melizabanales.wordpress.com is my website as well as missyfuego on IG