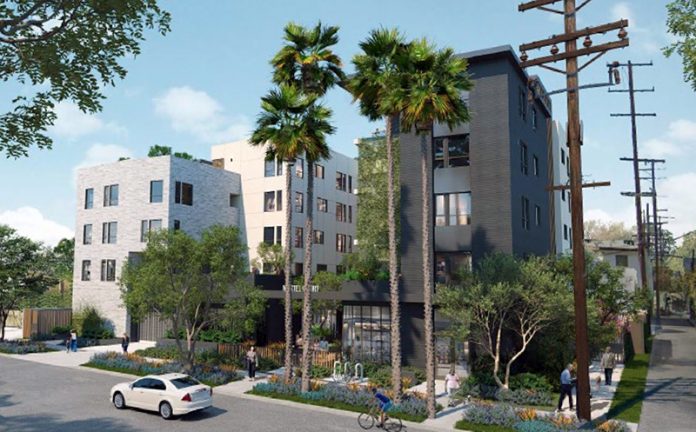 The West Hollywood Planning Commission will hold a public hearing to consider a recommendation to the City Council on adoption of the draft Housing Element and certification of the environmental impact report for the request to demolish seven dwelling units on three abutting parcels at 1041-1049 North Martel Avenue and build a new five-story, 50 unit 100% affordable multi-family residential building with supportive housing and a one level subterranean parking garage. The teleconference meeting will take place on Thursday, January 20, 2022, at 6:30 p.m. 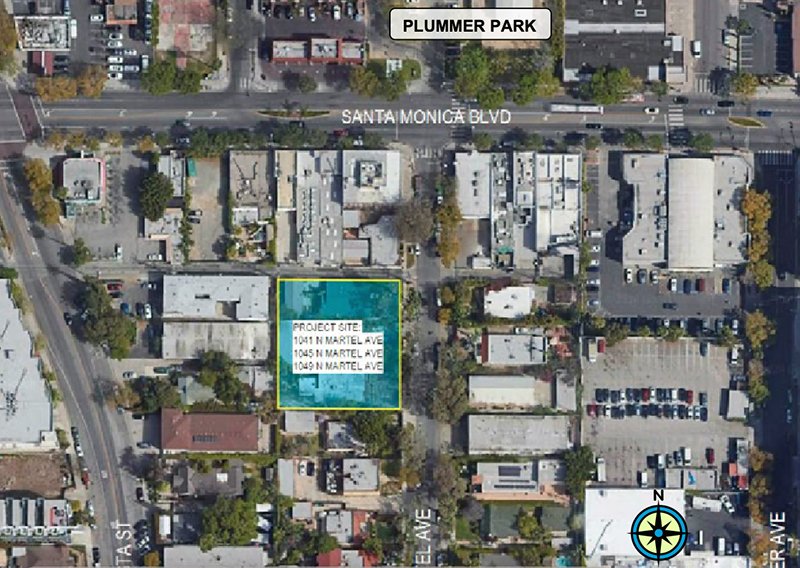 The existing land uses surrounding the project site to the east, west and south and in the immediate vicinity are single and multi-family residential buildings that range from one, to three stories in height within the R3B zoning district. The land uses to the north across the public alley fronting Santa Monica Boulevard are commercial uses and range from one to two stories in height within the CC1 (Commercial, Community 1) zoning district. The property immediately across the street at 1052 Martel Avenue has been entitled for a three-story, five-unit development and is currently in the plan check process before obtaining its building permits. Additionally, the commercial property across the alley at 7424-7426 Santa Monica Boulevard has been entitled for a five-story, mixed-use development and is currently under construction.

The project is located in a highly resourced area within the City of West Hollywood. In addition to the services provided on-site, residents will have access to nearby parks, transit, and retail. Neighborhood amenities include Plummer Park located 0.13 miles from the property, West Hollywood Senior Center located 0.10 miles, Durant Branch Library located 0.64 miles, Trader Joe’s Grocery located 0.14 miles, and a CVS/Target located 0.36 miles from the project site. The site is located one block from high quality transit.

The view the Planning Commission Teleconference Meeting Agenda Packet – Thursday, January 20, 2022 (includes links to agenda items and materials), click on the link below:

TO VIEW THE PLANNING COMMISSION MEETING
Planning Commission meetings are broadcast live on WeHoTV and on Spectrum Ch. 10 in West Hollywood.  You can also view on YouTube at www.youtube.com/wehotv.  WeHoTV programming is additionally available on multiple streaming platforms, including Android TV, Apple TV, Fire TV, and Roku.  Digital streaming platform viewers can easily find programming by searching for “WeHoTV” within the search functions of these services.  WeHoTV and Spectrum Ch. 10 are the only official viewing platforms.  The other viewing options and platforms are made available as a courtesy to viewers and their reliability cannot be assured by the city.  If you experience technical difficulties while viewing the meeting on one of these platforms, please access WeHoTV at the City’s website www.weho.org/wehotv