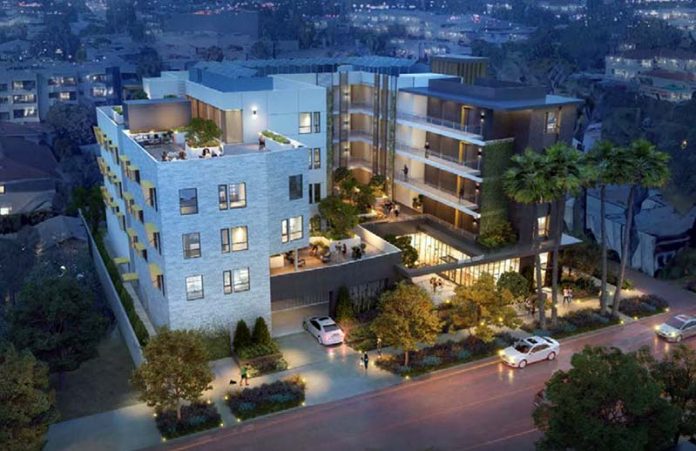 The West Hollywood Planning Commission voted on Thursday to move forward with a recommendation to the City Council on the adoption of an updated draft Housing Element and certification of the environmental impact report for the request to demolish seven dwelling units on three abutting parcels at 1041-1049 North Martel Avenue and build a new five-story, 50-unit 100% affordable multi-family residential building with supportive housing and a one level subterranean parking garage.

A total of 3,900 square feet of common open space will be provided within four area throughout the building, including a 553-square-foot area lobby courtyard on the first floor, a 2,063-square-foot podium courtyard on the second floor, a 411-square-foot amenity deck on the fifth floor, and a second 873-square-foot amenity deck on the fifth floor. The project does not provide any private open space for each of the units as a requested concession for providing 100% affordable units. The subterranean parking garage will be accessed from a single driveway on the southernmost portion of the site along Martel Avenue. The parking garage provides 19 parking spaces with two van-accessible spaces and two spaces for EV charging.

Issues that came up at the meeting were the 19 parking spaces, which some residents did not feel were enough for a 50-unit building. Public commenters assessed parking would become more difficult than it already is on Martel Avenue with the addition of the proposed housing facility. The area currently has permit parking restrictions.

However, 19 parking spaces is generous considering the developer is not required to provide any parking for a 100% affordable housing building. The developer didn’t believe parking would be an issue since most of the residents who move into the building will not have a car and the building will be located close to public transit.

There were also questions about the units not having enough storage facilities.

Commissioner Marquita Thompson asked about supportive housing, specifically about the demographic it will serve and what services will be provided.

“Special needs as an over-arching category, but in all likelihood, it will be individuals that are currently unhoused in West Hollywood,” said EAH Housing Director of Development, Steven Spielberg, “We’ll be working through the county’s measure 8 program, we’ll have a 1-to-20 case manager to resident ratio. Right now, we’re assuming that 25 of the 49 residents would be potentially moving from the street, so at least one fulltime case worker will help them in their transition, as well as support them through all their needs living in the building and then they’ll be a portion of another case manager, so it will work out to a 1-to-20 ratio.”

Spielberg assured the commission that there will be offices for on-site case managers and that a case manager will be on the property working 40-hours-per week at the offices on site.

Unusual time-related considerations resulted in several changes, refinements, and final modifications to the project design late in the process. The applicant has a deadline that needs to be met to qualify for funding.

Members of the design team responded to comments, suggestions, and outstanding issues. They submitted revisions and updates they said resulted in a thoughtful design that will prove to be a welcomed setting for affordable housing in the community.

Following a January 13, 2022 Design Review Sub Committee meeting, the applicant integrated final touches for the Planning Commission’s consideration. Since the Staff Report was prepared, key updated features of the design include but are not limited to:
a. A revised forecourt and rear garden area,
b. Enhanced plantings and architectural features along the alley in anticipation of the
north facade connecting to a public oriented laneway in the future.
c. Relocation of the rear multi-purpose room to create a flexible series of consecutive meeting and social spaces that can expand from 10 to 100 individuals depending
on the configuration,
d. More extensive use of brick veneer, a higher performing and more sustainable
exterior finish material on the front (east) and south elevations,
e. Recalibration of sunshades on the south and west elevation to reduce heat gain
and energy consumption,
f. Integration of a westerly oriented series of observation decks as “sunset terraces”,
g. Addition of new south and west facing trellis on the southerly roof top as a companion to a south easterly one in order to provide additional shade areas for the residents, and the latest design upgrades better reflect the city’s sustainability and environmental goals and bring the project in more effective alignment with West Hollywood’s adopted Climate Action & Adaptation Plan, Urban Forest Management Plan, Green Building Code, and sustainable roof measures. They also will ensure even safer, healthier, more diverse, and comfortable outdoor settings and spaces for residents and guests.

The item passed with six ayes and one recusal. The Resolution the Planning Commission approved memorializes the Commission’s final action on the matter. The action is subject to appeal to the City Council. Appeals must be submitted within ten calendar days from Thursday, January 20, 2022, to the City Clerk’s office.

Who are they kidding??? They are simply kicking the parking situation down the road for future generations to deal with. Just as we are dealing with the parking issues decided by previous generations. One simply has to peer in the garage of the building run by the West Hollywood Community Housing Corporation at Laurel & Norton Avenues to see how many low income people have cars, including many high-end Mercedes etc. This is a travesty if allowed to proceed.