The City of West Hollywood and its LGBTQ+ Advisory Board capped off Bi Visibility Week with a Bi Picnic Day at Plummer Park’s Vista Lawn, located at 7377 Santa Monica Boulevard, from 1p.m. – 5p.m. The event feature a DJ, lawn games and information booths by the Los Angeles Bi+ Task Force and amBi social group.

Participants brought blankets and found a shady area to socialize. The City provided plenty of free sandwiches catered by Fresh Corn Grill WeHo and free ice cream by Coolhaus to cool off during a hot Saturday afternoon.

“We brought on the #BiPride yesterday at @wehocity Bi Pride Picnic at Plummer Park,” posted Bi+ Task Force on their Instagram account. “It was a sweltering day but bi+ friends and family sat on blankets under the shade and people played our bi and pan cornhole games while enjoying sandwiches and ice cream provided by WeHo.”

The bi picnic also had some Disney royalty who crashed the party. Elsa of Arendelle (from Frozen) Belle (Beauty and the Beast) and Rapunzel (Tangled) took advantage of some free ice cream and took photos with anyone who asked at the bi event. The characters were from Princess & Me, a character and events service which hosted a birthday party that day in Plummer Park. 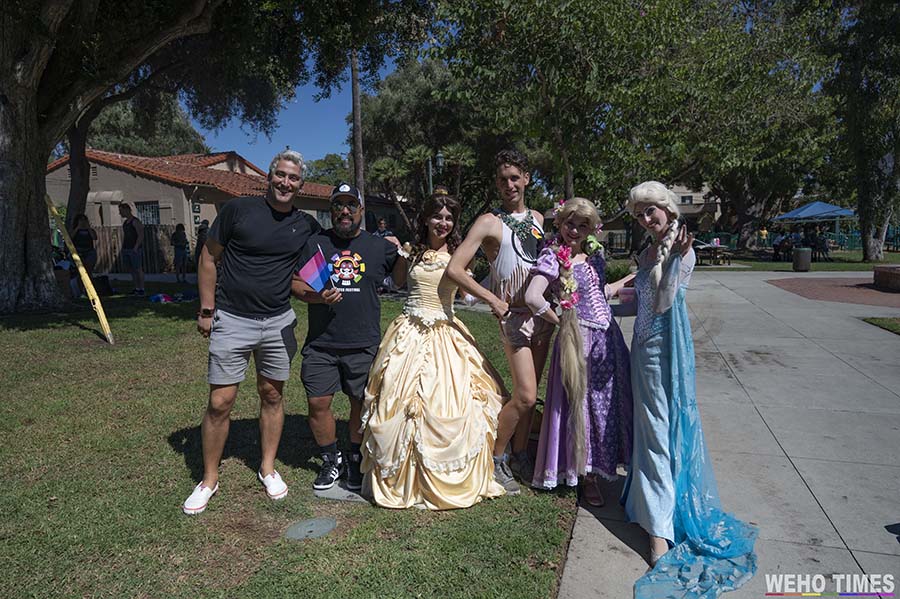 The City of West Hollywood’s recognition of Bi Visibility Week was intended to raise the visibility and increase awareness of the Bisexual community. Since incorporation in 1984, the City of West Hollywood has become one of the most influential cities in the nation for its outspoken advocacy on LGBTQ issues. No other city of its size has had a greater impact on the national public policy discourse on fairness and inclusiveness for LGBTQ people. More than 40 percent of residents in West Hollywood identify as LGBTQ and three of the five members of the West Hollywood City Council are openly gay or lesbian. The City has advocated for more than three decades for measures to support LGBTQ individuals and has been in the vanguard on efforts to gain and protect equality for all people on a state, national, and international level.