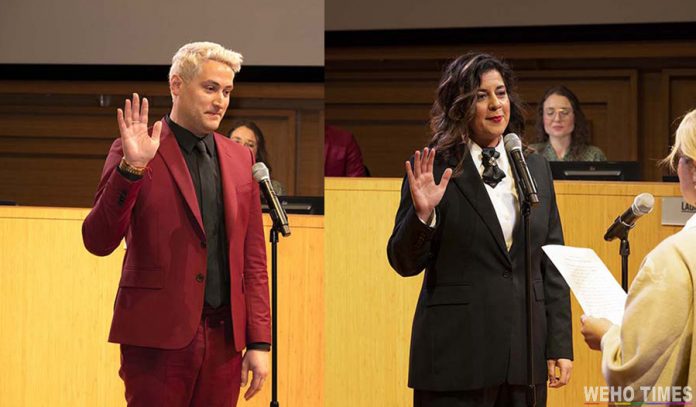 Mayor Shyne was elected to the West Hollywood City Council on November 2022. She made history as the first Iranian American to serve on the Council, the first woman of color to serve, and the first out LGBTQ Iranian elected to public office in the world. 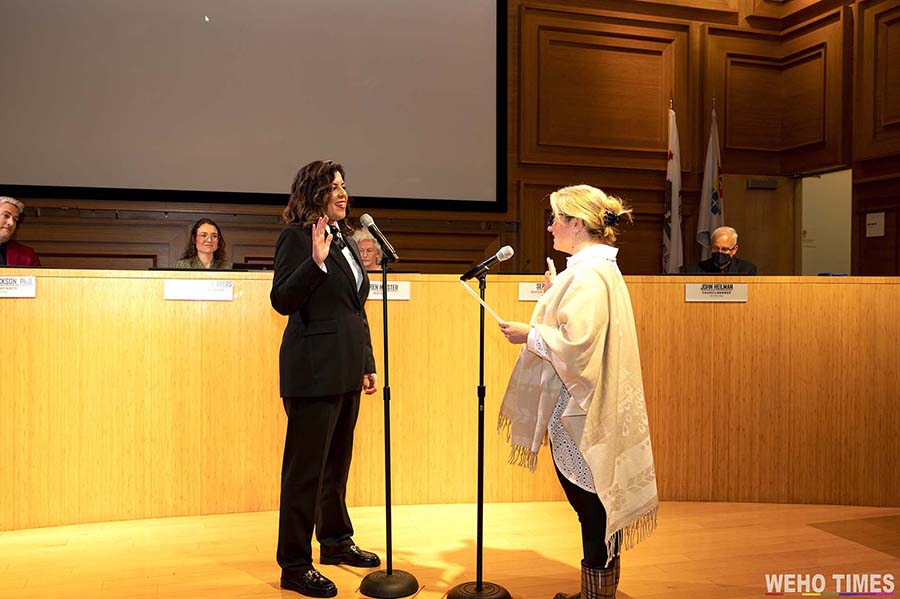 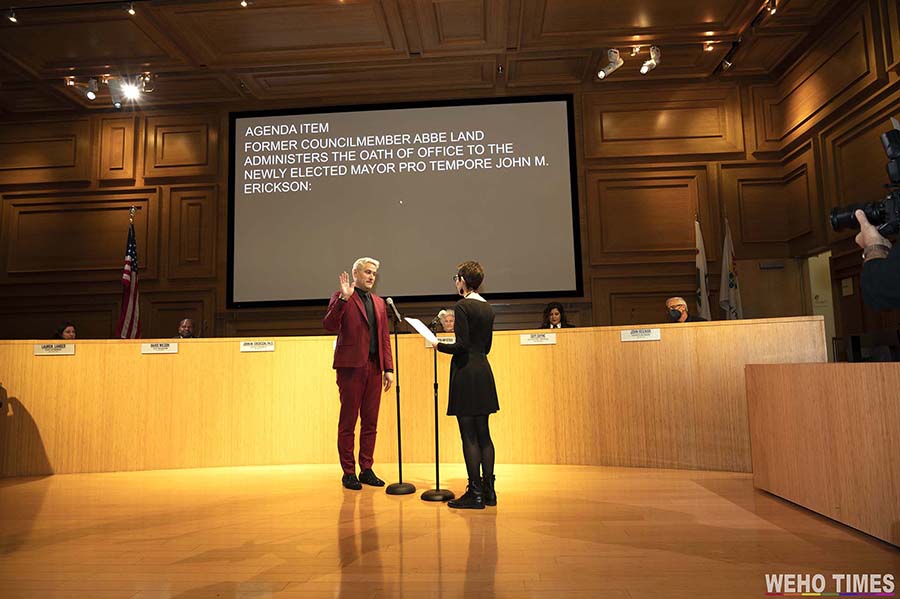 It was a packed house at the West Hollywood council chambers despite pouring rain and flash flood warnings throughout Los Angeles County. Richard Maggio, a West Hollywood resident who served as a rent WeHo stabilization commissioner for 33 years, was the emcee for the ceremony before the Reorganization and Installation meeting. The pre-ceremony invited several friends, supporters, community leader and members of her family to speak and give some words of encouragement to the new Mayor and Mayor Pro Tem. 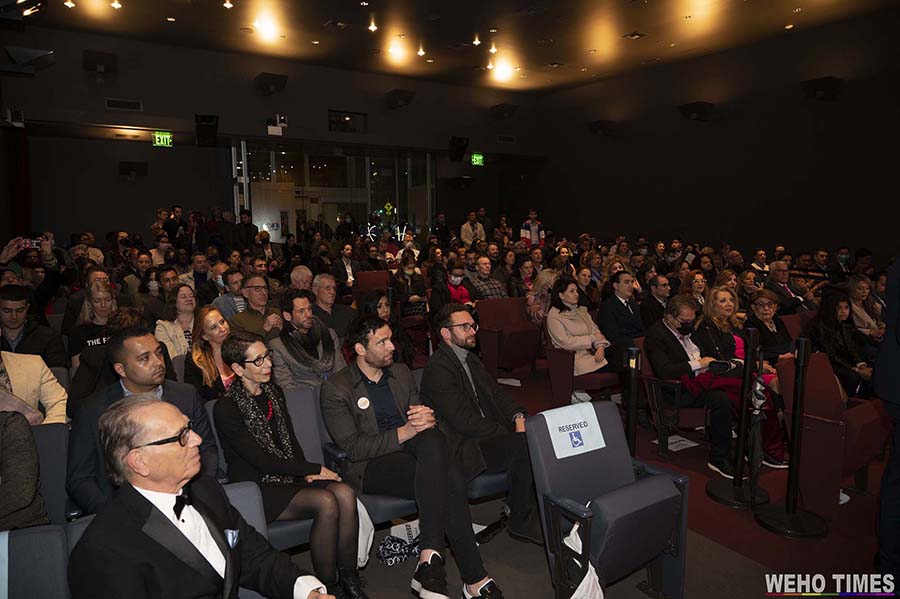 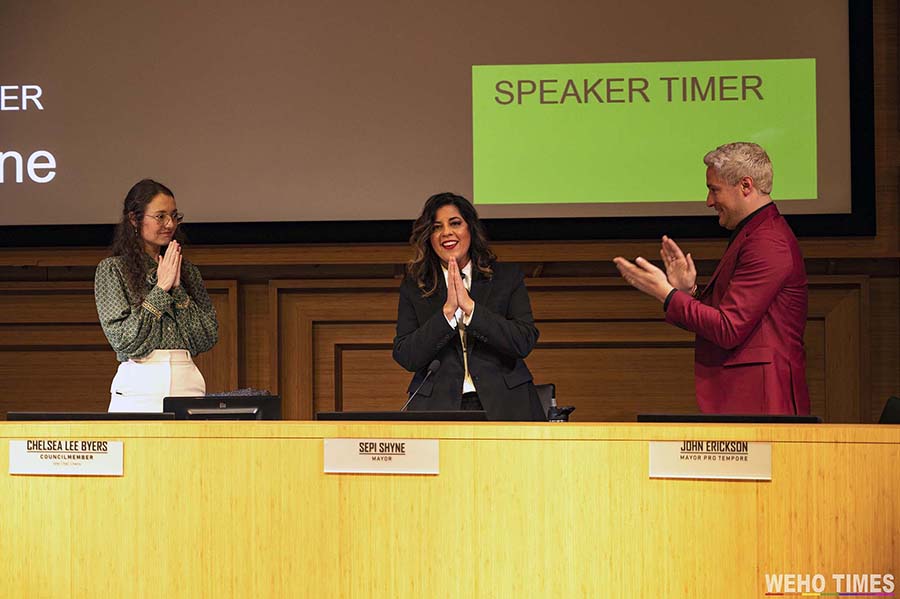 The Mayor’s mother opened the ceremony with comments in her native Fārsī language. There were performances by the Trans Chorus of Los Angeles and singer, song writer Mikalah Gordon. And she received interfaith invocations by spiritual leaders and supporters, including her sister.

Mayor Meister called the Regular City meeting to order. Following the City’s Land Acknowledgement, she introduced Tina Calderón, a Gabrieliño Tongva / Chumash Culture Bearer who helped draft the City’s Land Acknowledgement. She performed a song that her culture offers all of their women when they achieve something tremendous. The song sent a message stating “We are women. We Are strong.”

Mayor Pro Tem Erickson thank everyone who showed up to the ceremony, despite the rain, calling the event “a moment in our city’s history with the first ever woman of color to be sworn in as mayor.” 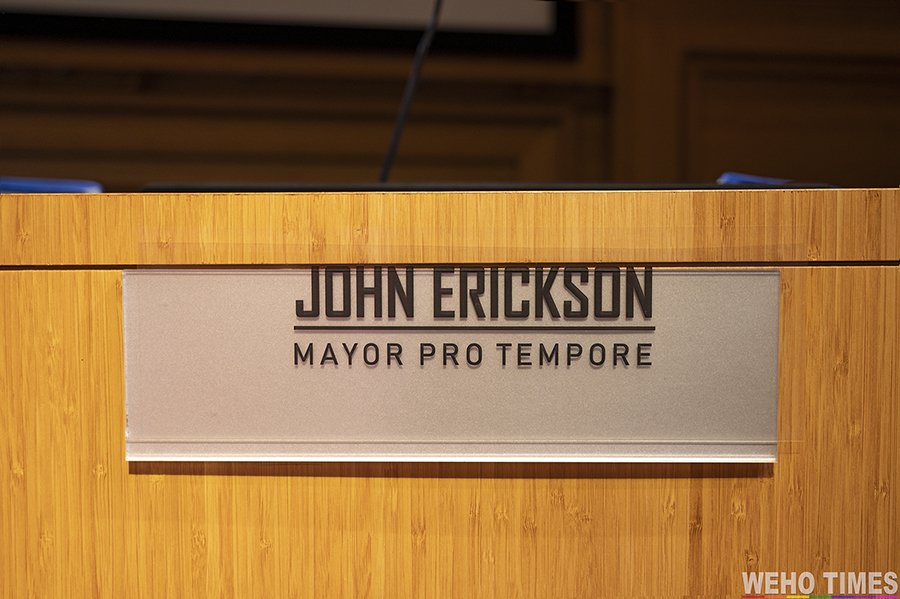 Erickson thanked outgoing Mayor Meister for her service as mayor and acknowledged the challenges the council faced as the city moved to in-person meetings. “Sometimes we have our disagreements here in West Hollywood,” he said. “I’m glad, and I’m sure our City Clerk Melissa, who is taking the minutes most times, is glad we didn’t suffer from McCarthy Madness…”

The new Mayor Pro Tem thanked his family, supporters, and friends for being the backbone for his service to the council.

He especially thanked Abbe Land for the guidance and friendship she has given him throughout the years. “Many years ago when you asked me to serve as your deputy, you changed my life,” he said emotionally. “I will forever be grateful.”

Erickson spoke of his early years in West Hollywood, a city he expressed a deep love towards, where he was allowed to live his life as an openly gay man.

During her comments, Mayor Shyne thanked her colleagues in the City Council, City Manager, Attorney, Staff, public safety officers and Block by Block Ambassadors. She congratulated Mayor Pro Tem Erickson and acknowledged outgoing Mayor Lauren Meister for her service to the city for so many years.

“Now, not only is there a new Sheriff in this county, but there is a new Mayor in this City,” Said Mayor Shyne in her opening statements. “Thank you to everyone who performed and has contributed to making this night a celebration. Thank you to my incredibly supportive family and mom who has always been by my side; my father who I knew is here in spirit; my chosen family, friends; my incredible feminist sister friend Supervisor Horvath for swearing me in.”

The new mayor spoke about the city’s history, her love for the city and the purpose that prompted her to serve the city and run for City Council, “I ran for office because West Hollywood had lost its purpose along the way and needed a new dream,” she said. “A dream that represented and elevated more of us; a dream that included those that had been forgotten, those that didn’t feel included; those in our community whose voices were not being heard anymore; a dream that included a brighter and more inclusive vision for West Hollywood–one where the sun would shine on all of us, not just some of us.”

The installation meeting closed with a performance by the all-female Iranian Arezoo L.A Daf Ensemble. 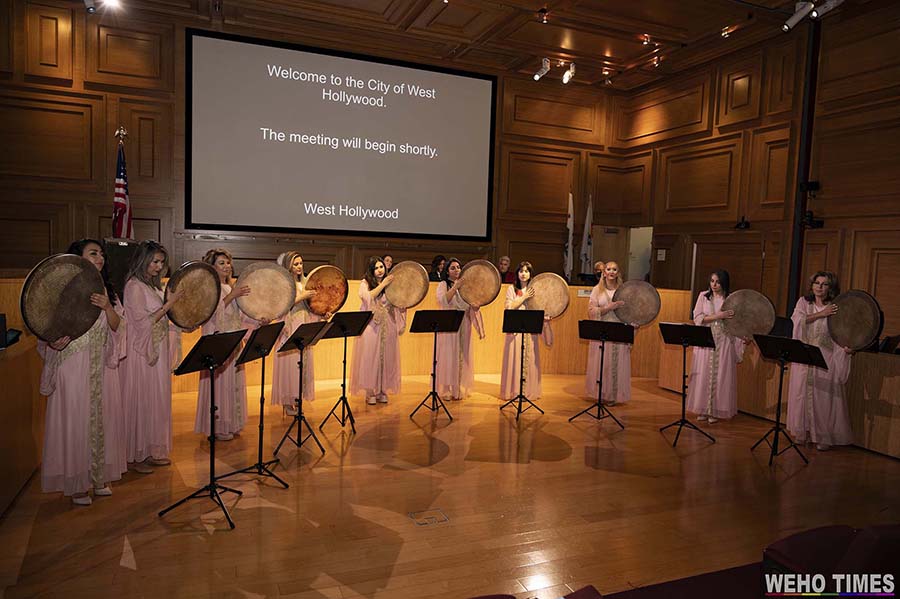 The reception following the installment took place across the street at the Blue Building of the Pacific Design Center. Attendees enjoyed music provided by DJ Lisa Pittman, light refreshments and Persian food catered by Shamshiri Grill located at 1712 Westwood Boulevard. 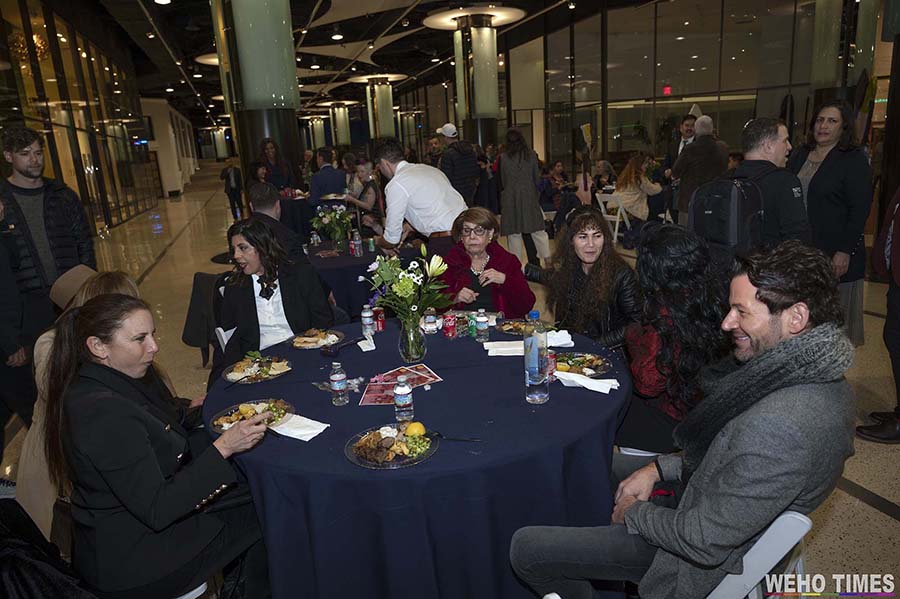 The City Council Reorganization and Installation Meeting and Oath of Office ceremony is available for viewing as part of the adjourned City Council meeting on the City’s website at www.weho.org/wehotv or by visiting the City’s WeHoTV YouTube Channel at www.youtube.com/wehotv.

More photos of the event are available on our Facebook page at:

Not only is there a new Sheriff in our County, but there is a New Mayor in our City.

Now I would like to give gratitude in English: Thank you to everyone who performed and has contributed to making this night a celebration. Thank you to my incredibly supportive family and my mom who has always been on my side, my father who I know is here in spirit, my chosen family, friends, colleagues, my incredible feminist sister friend Supervisor Horvath for swearing me in and thank you to all the elected and appointed officials, Team Shyne and every one else who has come out to take part in this incredible evening.

Finally, a huge thank you to my city council colleagues for your support, our city manager, our city attorney, public safety officers, Block by Block Ambassadors and our impeccable staff for making this night so special and safe. Congratulations to Mayor Pro Tempore John Erickson. I am grateful to serve with you.

39 years ago, a group of innovative community members and dreamers, including my current colleague Councilmember John Heilman came together to form West Hollywood which is 1.9 square miles. Their dream was sparked by the passion and need to protect and fight for the rights of our renters, seniors and the LGBTQ Community. Little did they know how incredibly influential our city would become. A city where so many want to do business, visit, work and live.

I moved here in 2009 and have lived here ever since. I love West Hollywood. I love West Hollywood because it is the one city that was created with purpose and heart. We provide for so many thru our social service programs, innovative forward thinking policies, creative infrastructure and development, and our pride in providing a safe haven for our LGBTQ Community as well as other historically marginalized groups and immigrant communities.

We are a walkable city that adores our pets and we know our neighbors. I believe that the reason for West Hollywood’s success is because West Hollywood is a City of purpose. I discovered my own purpose while living in West Hollywood. And that is to illuminate which means to bring light to the world by serving humanity, uplifting and elevating people and eradicating the toxicity and darkness that has pervaded our social fabric, especially in politics.

I ran for office because West Hollywood had lost its purpose along the way and needed a new dream. A dream that represented and elevated more of us. A dream that included those that had been forgotten, those that didn’t feel included, those in our community whose voices were not being heard anymore, a dream that included a brighter and more inclusive vision for west Hollywood. One where the sun would shine on all of us not just some of us.

I was elected to West Hollywood City Council in November of 2020 and made history as the first Iranian America to serve on this council, the first woman of color and the first out LGBTQ Iranian to serve in public office anywhere in the world.

When I ran for office, I promised to bring the people’s voices to city hall. Because, I am a woman of my word. In my first two years, I kept all my promises and passed every single plan.

I am an Iranian American woman. We are referred to as Sheer Zan which means Lioness. Because we are powerful, strong, committed, passionate, loyal, fiercely protective and natural born leaders.

I have learned a lot the past two years serving as your Councilmember and Mayor Pro Tempore.

We have brought West Hollywood into the 21st century, lifted up our workers with more rights,

created the highest minimum wage in the country including sick pay and paid time off for all,

we are developing interim housing with services in West Hollywood for the first time,

and we are developing 24/7 mobile behavioral health crisis response unit that will help bring expert care to our unhoused folks and even our residents so that our law enforcement can focus their time on fighting and solving crimes in areas that they are experts in.

My focus has and always will be on solutions and the creation of new systems that will make West Hollywood better. My priorities as Mayor with respect to policies and initiatives this year are the following:

Lastly, to my Iranian community, I was born in the spiritual city of mashhad 46 year ago. I was 2 when the revolution happened and my childhood and the childhoods, lives and freedoms of so many Iranians were stolen by this brutal Regime that has brought nothing but darkness to Iranians and the world.

My commitment to you is to use every bit of power that I hold by building relationships, passing resolutions and partnering with other elected officials on all levels to ensure that Democracy is restored to Iran and the Iranian people are finally free of this darkness. As a sheer zan, a lioness I know that Women are the source of creation and bring Life to this planet and it is women that will bring Freedom to Iran. I will be one of those women taking down this darkness and one day in our lifetime, each and every one of us who has been ostracized from being in our homeland whether Jewish, Christian, bahai, LGBTQ, and women who refuse to be oppressed will once again be free in Iran. That is my promise to you and I am a woman of my word.

Never did I imagine as a young lesbian Iranian immigrant that I would one day serve as the Mayor of one of the best cities in America. That is the promise of America. That is the dream that West Hollywood helped make true for me. And I am so honored to serve as your Mayor. Zan Zendegi Azadi. Woman Life Freedom.  Thank you.