Christopher Street West Association Inc, the 501(c)3 nonprofit that produces LA Pride, partnered with the Dodgers for an LGBTQ+ LA Pride Night at Dodgers Stadium as part of the monthlong “Thrive with Pride” June calendar.

The special event ticket package was available to fully-vaccinated fans that included a game ticket for the 7:10 p.m. game against the Texas Rangers and an exclusive Dodger Pride-themed t-shirt. LGBTQ+ Dodgers fans wore their exclusive rainbow colored Dodgers t-shirts (only available in sizes medium and large) to LA Pride’s first in-person event since 2019. 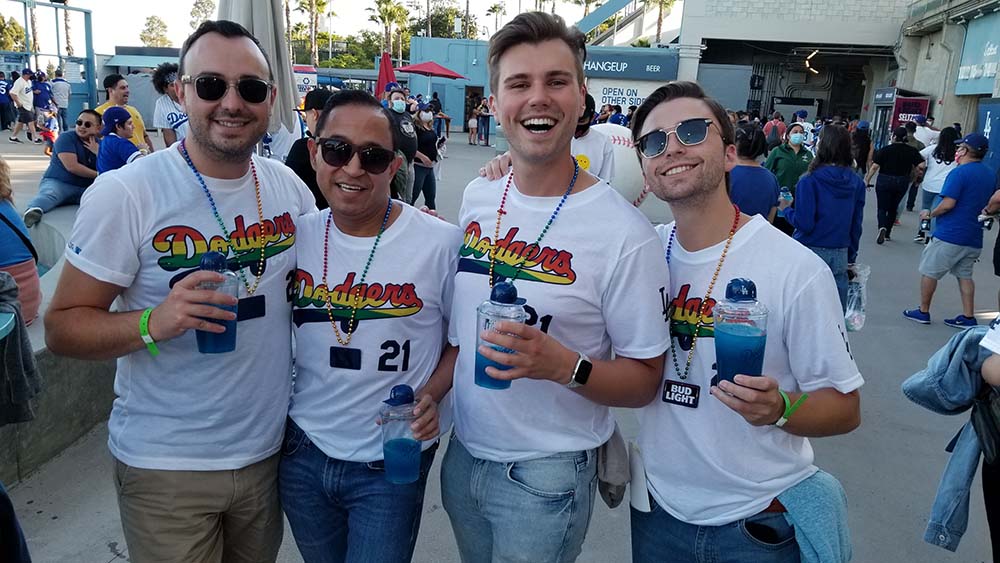 Photo by Mike Pingel for WEHO TIMES”I’m a Los Angeles Dodgers fan, of course I am,” said WEHO TIMES contributor Mike Pingel. “It was festive. It was a bunch of Pride people having fun. Everybody was decked out in their rainbow outfits. If it wasn’t the promotional Dodgers t-shirts, everyone had rainbow shirts, hats, masks. Everyone was showing their pride.”

The LA PRIDE night event kickstarted with artist Vincint singing the National Anthem. “He knocked it out of the park,” said Pingel. “It was fantastic.”

Pingel reports that many LGBTQ people were recognize during the beginning of the programing, including first responders. There were plenty of LGBTQ Commemorative rainbow items for sale. Pride cups were also part of the memorabilia with a purchase of draft beer.

DJ Bowie Jane, who is known in the West Hollywood circuit, played some tunes at the pre-party, as well as during the fireworks display towards the end of the evening.

“The other perk that came with the LGBT LA Pride ticket was we all got to go onto the playing field and watch the fireworks from there,” said Pingle. “That was an amazing experience to be surrounded by so many LGBT people. To my understanding, they had never done that in the past. At least they didn’t do it the last time in 2019. It was something special that we got to do at the event. We were on the winning grass because we kicked Texas’ ass that night.”

For more information about any Pride event, visit www.lapride.org.