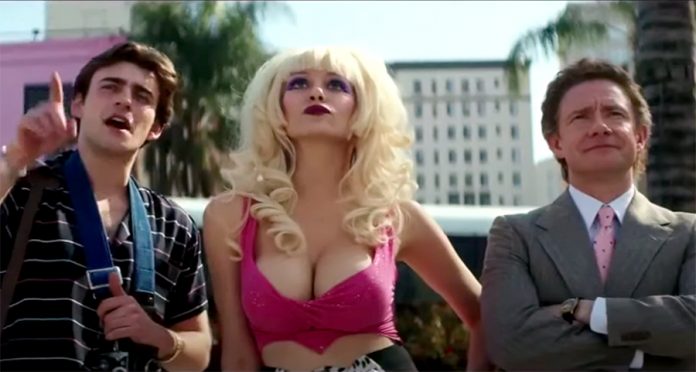 The new trailer released yesterday shows “Shamless” actress Emmy Rossum, completely transformed into the hot pink Barbie goddess with the high pitched baby voice. “I am a bright, pink light here to inspire joy,” she says in the sneak peek.

Those expecting a Tiger King type documentary exposing the truth behind the bleach blond beauty, need to think again. Peacock’s ‘Angelyne’ is a re-enactment of a woman’s rise to billboard fame above famous boulevards like Hollywood, Santa Monica and The Sunset Strip.

Angelyne is mainly a billboard model promoting herself as the brand.

“So, what are you advertising?” She’s asked in the teaser.

“Myself, of course.” She responds.

Angelyne has appeared in films, music videos and TV shows. She’s also a painter with a collection of self-portraits that she painted herself—however to WeHoans she’s is mostly known as a curious character who drives all over West Hollywood in her pink corvette. She is often spotted selling tee shirts, stickers and posters with her likeness out of the trunk of her car. for the right price, she will allow you to take her photo from the nose up.

Everyone can agree that there is nothing more exciting and more “Hollywood” than an Angelyne sighting.

“You want to grab people’s attention?” Angelyne says at the end of the sneak peek. “You have to tease.”

OK. We are intrigued.

the Angelyne series is coming soon to Peacock. The new streaming platforms launches nationwide on July 15, 2020. Other content includes an adaptation of Aldous Huxley’s 1932 classic “Brave New World,” as well as revivals of “Psych,” “Punky Brewster” and “Saved by the Bell.”

One whole year later and still no Angelyne, tease