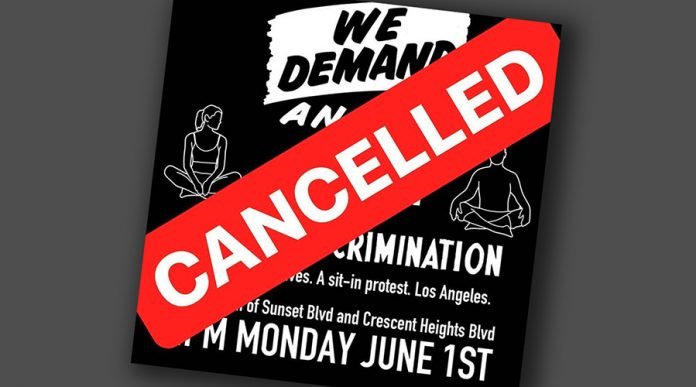 A peaceful sit-in that was planned today to take place at Sunset and Crescent Heights Boulevard in West Hollywood has been cancelled by the organizers due to fears of looting and violence coming to the City. The sit-in was a call for justice for the murder of George Floyd.

“Due to a large amount of threats of violence and looting homes, and the uncertainty of the curfew we have decided to cancel tomorrows protest,” organizer Luke Austin posted on his Instagram account. “We hoped for a peaceful ‘love-in’ but at this time it feels too risky for all involved. We don’t want anyone getting hurt. We are so sorry ❤️❤️❤️”

Austin posted another Instagram message to elaborate why the peaceful sit-in was canceled.

“To the black people who had some hope in me and this protest, I’m sorry. I am so sorry. I let you all down. The best explanation I can give is that after two day of an onslaught of negativity, hate, doubts and threats to Brandon and myself from non-black detractors, I became hell-bent on making sure this event that I crated and put out in to the internet, would be a safe one. I felt very responsible for people’s well-being and lives. I wanted people to feel confident that they were coming to a sit-in that they’d be safe at. I’d heard from mothers wanting to bring their children, and people who were too scared to attend a protest like the one that took place on Saturday. They wanted to hear how we would maintain a safe, peaceful afternoon. In an attempt to outline our hopes and intentions for this peaceful sit-in, I stupidly listed in an IG story what behavior we wouldn’t tolerate.

Worst of all, I ended up saying, ‘We will point you out to the police if you try it.’

This could not have been more tone-deaf and wrong. And I’m sorry. The statement was intended towards any non-black people with ill-intentions, who might’ve had ideas about showing up to misdirect the peaceful mission of the event. I now see how it completely appears as though I was threatening to direct the police towards Black protestors who were speaking up on their pain and frustrations. I fucked up, and I’m so sorry. I went against everything I’d said I wanted from this protest. I went against what I stand for.

I genuinely hoped we weren’t going to have to deal with any unrest throughout the protest. I stupidly or naively thought I could create a protest that thousands of people could come, sit and be protected while protesting. Getting out what they wanted to say after this is devastating month of police brutalityand racism. By late yesterday, Brand and I in addition to those helping us organize feared for the safety of the families in the area. and with a fluctuating curfew I feared we would find ourselves in a situation that we couldn’t control, and lives would be at risk. For your safety, we felt that cancelling was the right thing to do.

I dreamt of a powerful & peaceful love-in, but after listening to the wisdom fo those with far more experience than me, and without some of the proper safeguards in place, this event felt too risky. Again, I am sorry. I’m grateful to those who held me accountable and helped me understand the risk I was putting people in, despite my best intentions. You’re right to be angry, and I’m listening. I’ve learned from this, and will continue to.

The City of West Hollywood implemented an Executive Emergency Order establishing a West Hollywood curfew the past two nights to keep WeHo residents safe. The curfew may continue to be in effect tonight. Details to follow.