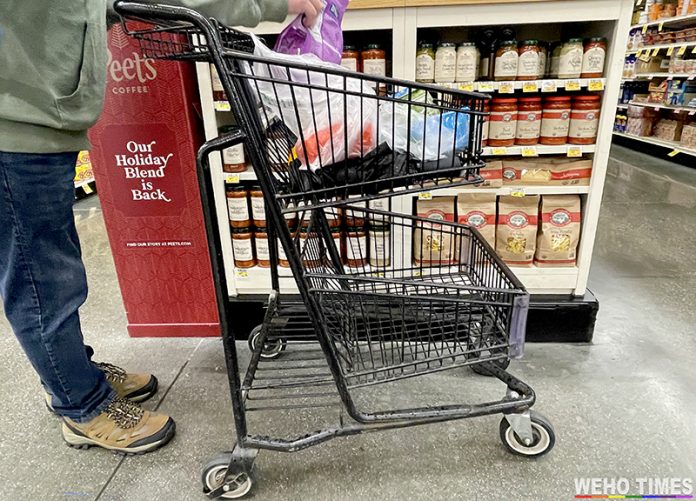 Pavilions WeHo supermarket at 8969 Santa Monica Boulevard is experiencing a shortage of shopping carts, which is believed to be tied to homeless issues in West Hollywood, says the general manager of the store. Most of the smaller-sized shopping carts have been stolen with only 14 out of 100 of those particular carts currently in stock at the store.

“On Wednesday December 22, 2021, I was at Pavilions and was still wondering why there are so few smaller shopping carts, and when I asked one of the workers there, they said that most of them were stolen,” reads Cleary’s email. “When I inquired further I was told they originally had 100 of the smaller carts but only now have 14 from the original 100 carts. I was then inside Pavilions to confirm this with Craig the assistant manager, and he said yes. When I asked when they were getting new ones, he told me they ordered them in July, but there have been delays, so they would not be arriving until March 2022.”

Cleary also described an altercation he witnessed between a security guard and an unhoused person inside the store where the African American security guard was called a racial slur numerous times. “Really? This is what our city has turned into? I really need and the residents need our City of West Hollywood’s response to these two things ASAP,” he said.

Mayor Meister thanked Cleary for informing the city on the issues. She added that the store should report the thefts, presumably to WeHo Sheriffs.

The General Manager at Pavilions WeHo, Leticia Perez, confirmed that the majority of their smaller carts have been stolen from their lot. She said the carts automatically lock when they are removed from the parking lot, however, the smaller carts have still gone missing.

Perez told WEHO TIMES that she did not want to pin point missing carts as a direct result of the growing homelessness in West Hollywood, however, she said she did not rule it out. In most cases, shopping carts are used by the unhoused to transport their personal belongings.

Perez also confirmed that she ordered the smaller shopping carts and does not expect them to arrive until some time in March.

I love those carts

Sadly, this is a result from the violent homeless population that breaks the law whenever they can to get their drug fix. The Weho politicians need to remove and send the homeless back to their hometowns. According to the CA Policy for Housing, 85% of homeless in the state are not originally from the state and arrived in less than 10 years to take advantage of the freebies in the state and cities.

Hi Avery, could you please provide a link to the study stating 85% of people who are homeless in the state are not originally from here as this is contradictory to several studies done from as early as 1988 to present. I searched CA Policy for Housing and could not find an organization by that name, but did come across this LA Times article covering the 2019 Homeless Count (most recent count) “L.A.H.S.A.’s 2019 homeless count found that 64 percent of the 58,936 Los Angeles County residents experiencing homelessness had lived in the city for more than 10 years. Less than… Read more »

Clarification needed, the African American Security Officer working at Pavilions who was assaulted while called a racial slur numerous times was assaulted by Kashmire Duran from Malibu and, NOT an unhoused person. Kashmire Duran has a lengthy criminal record for numerous hate based assaults and is known to frequent West Hollywood, she is from a wealthy Malibu family who keeps bailing her out of trouble. Pavilions needs to PERMANENTLY BAN her from their stores for the public’s safety as many West Hollywood restaurants and night clubs have❗

The mayor of West Hollywood is surprised to hear first hand about the homeless crisis. WTF? Get out of your damn car and walk the streets of your city. I live on Ramage Street directly behind Pavilion, I cannot walk to the store without coming in contact with 4 to 5 homeless camped out – and that’s only the Ramage to Santa Monica to the Pavilions parking lot entrance. This doesn’t account for the Keith Street side nor the Robertson side. Everyone of the council members needs to open their eyes and ears and walk the streets of West Hollywood.… Read more »

I think the Mayor (who I often see walking around West Hollywood, I don’t even know if she owns a car as I’ve never seen her driving) was surprised that she was receiving a letter about a large chain retailer that apparently isn’t concerned about the issue other than ordering new carts but is expecting her and the City to do something about it. I love our Pavilions but 1) I think they can fend for themselves; and 2) even the Store Manager doesn’t know who’s taking the carts.

I’m on the streets of WEHO a lot and don’t see homeless using pavilion carts…and if they did, I’m sure they’d go for the larger cart instead of the little gay buggies. But i DO see people who live close by wheeling their purchases home in them on occasion.

I agree. I haven’t been looking for them but I don’t recall seeing any unhoused residents using pavilions’ small carts. We don’t really have a large cart-using unhoused population anyway. I know of about 5 using carts and they’re the cheaper 99 cent store carts.

Perhaps the shopping center’s “security“ staff could actually do their job and get off their phones and stop people from leaving the property with the shopping carts and stop people from parking there that aren’t actually going to the stores within the center. Parking has become impossible and I often see people park and then walking off the premises to Santa Monica Blvd.

“Unhoused person” A more accurate description would probably be drug addict, alcoholic, or mentally ill person since those are the encounters we all have. Not someone looking for a home.

ABOUT US
WeHo Times West Hollywood Daily News, Nightlife and Events. The WeHo Times is an online news source covering the life and times of the City of West Hollywood. Featuring unbiased professional reporting and photo journalism, WEHO TIMES is updated daily, delivering the latest city news. The online publication founded in 2017, also features cultural events, people, politics, places, nightlife, and the history that make the City of West Hollywood the unique, creative city we all know and love.
Contact us: editor@wehotimes.com
FOLLOW US
© 2021 Murillo Media, LLC
wpDiscuz
10
0
Would love your thoughts, please comment.x
()
x
| Reply