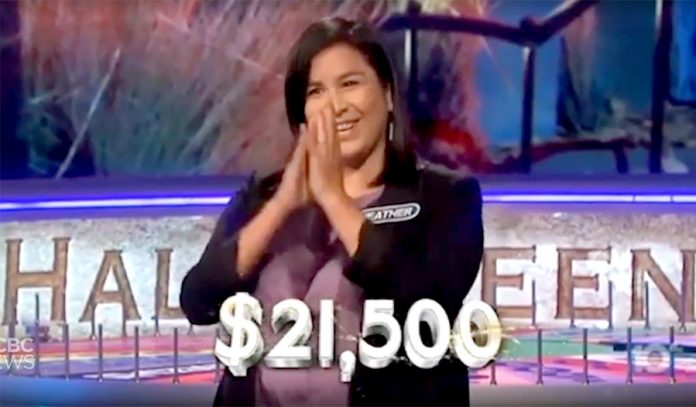 WEHO TIMES received some blowback after publishing a story yesterday about West Hollywood resident Heather Abbey, who appeared on Game Show’s Wheel of Fortune on Tuesday, October 27, 2020, on KABC (ABC 7).

What was supposed to be an uplifting story about a mother of two trying her luck at the wheel for a chance to win cash and prizes, was tainted in controversy. Readers recognized Ms Abbey in the article and then tuned in to watch her solve the puzzle “The Horror, The Horror” and walk away with $21,500 during the show’s Halloween-themed night.

The horror, the horror indeed. It turns out Heather Abbey was cancelled in Canada for her alleged shady business dealings, and her cancellation is coming back to haunt her new life in the city of West Hollywood. She was immediately called out as the Indigenous entrepreneur from Saskatoon who allegedly scammed Indigenous artists out of thousands of dollars and owes $62,000 of public funds to Creative Saskatchewan, a provincial arts agency.

“This is awkward,” WEHO TIMES reader Johnnie Jae posted on our Facebook page. “The moment when one of NDN Country’s biggest scam artists disappears while owing thousands upon thousands to individuals and organizations she scammed in Canada and reappears on Wheel of Fortune in U.S.”

“Hopefully any winnings are directed to the numerous people that were duped out of their money during the Wheel of Misfortune experience with this individual,” Bradyn Parmesan added.

CBC News, a division of the Canadian Broadcasting Corporation, reports that Creative Saskatchewan asked Abbey to repay $62,000 of taxpayers’ money after she failed to deliver on two proposed projects. Allegations of financial mismanagement and broken promises prompted the arts agency to audit five projects undertaken by Abbey and her e-commerce company Indig Inc. which received more than $160,000 total in taxpayers’ money between 2015 and 2019.

The appearance on Wheel of Fortune opened some wounds for a number of Indigenous artists who say they were duped by Abbey through Indig Inc, prompting the hashtag #boycottindginc last year.

Abbey, a Cree woman from Little Pine First Nation, located 200 kilometres northwest of Saskatoon, is currently a student at Los Angeles Film School and delivers food part time. She lives with her fiancé and two children. She wants to create authentic Native American movies one day. She told Wheel of Fortune that she hoped to win enough money to help pay for her education and take her family on a trip to Paris.

However that plan changed after the backlash from her appearance on the show. She told CBC News that she will spend her Wheel winnings in three ways: repaying Indigenous delegates that weren’t able to attend a Tokyo trip she organized, repaying Creative Saskatchewan and buying a new bed set for each of her two children.

“I knew that everything would flare up again if I made it on the game show,” she said via an email to CBC News. “But I also knew it was an incredibly long shot in the first place — from application to audition to being selected onto the show to the actual game show itself! All in all though, I’m pretty proud of how I played, and that I have actual money coming to make my payments — delivering food isn’t exactly keeping me in the money!”

Representatives from Wheel of Fortune did not respond to our requests for comment regarding their vetting process after the airing of their Halloween special featuring Heather Abbey.