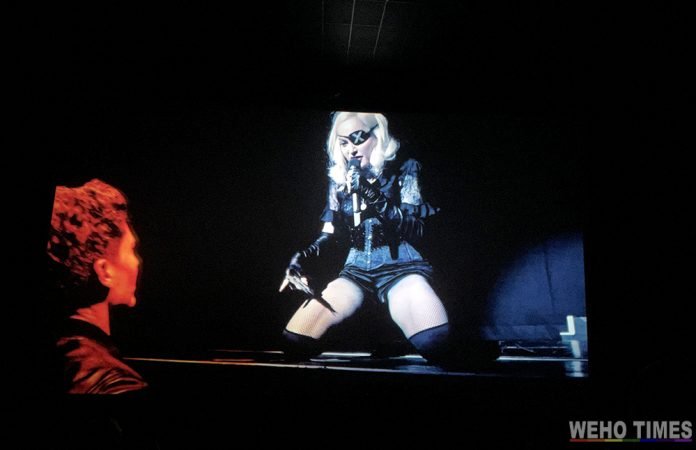 A select list of fans were given the opportunity to experience Madonna’s latest release of the Madame X film on the big screen at the TCL Chinese Theater in Hollywood last night. Madonna celebrated the release of the concert in the westside, now streaming on Paramount+​ and MTV​, with a special screening hosted by RuPaul’s Drag Race​ runner-up Gigi Goode​ from Season 12, and Season 13 winner Symone​.

The limited seating was available at theater 6 to super fans who RSVP-ed ahead of time. A long line curled outside the courtyard of the TCL by showtime at 7pm. Fans wore shirts and other accessories commemorating their favorite pop Icon. And no Madonna event is complete without the presence of M impersonators as can be witnessed by the mother and daughter team who were on hand to take photos with fans. 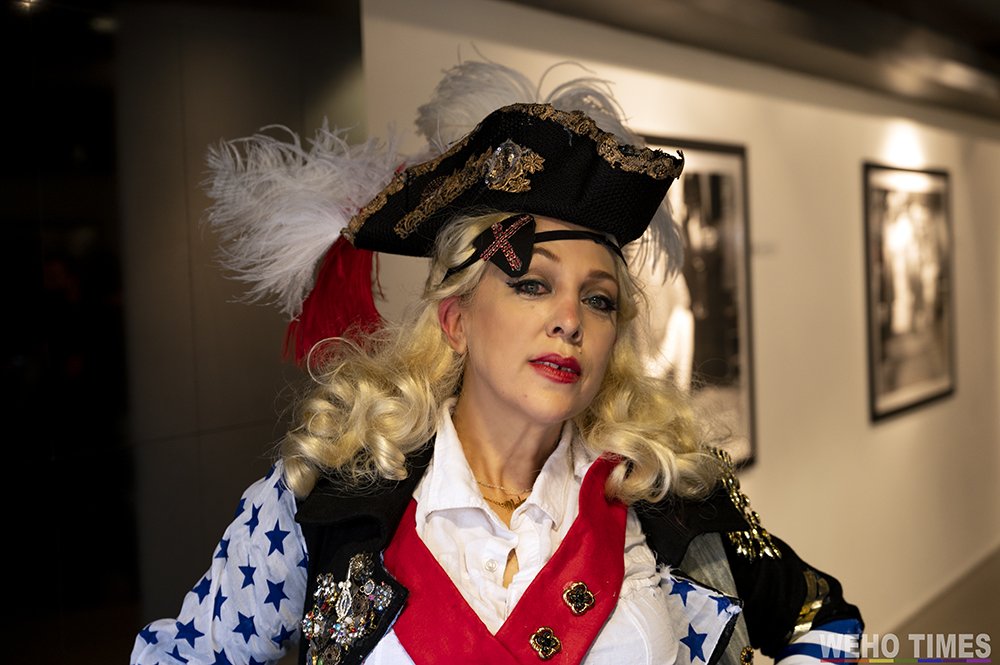 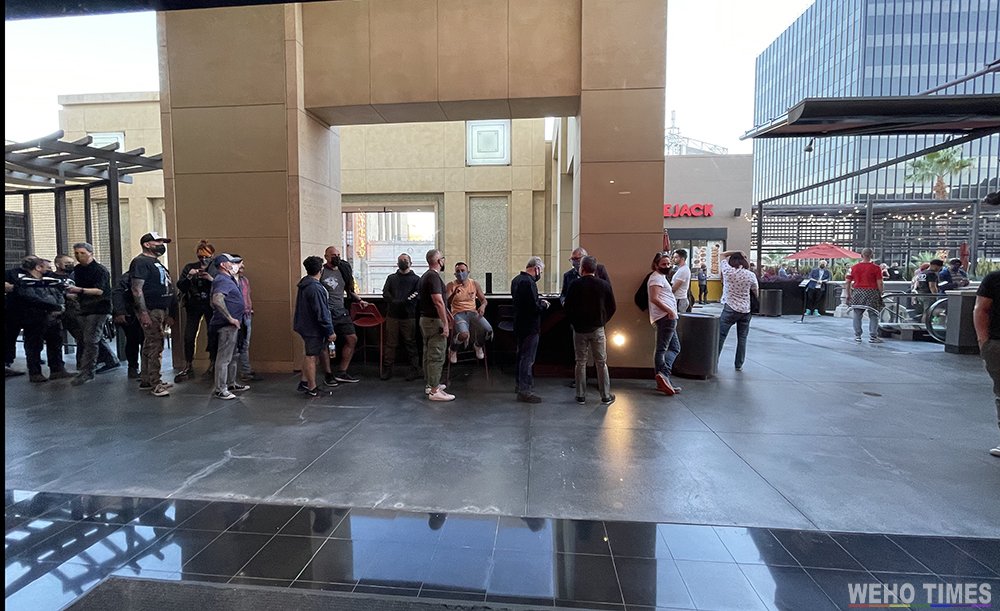 The show began at a little after 7:30, which was a half-hour late in true M form. Symone and Gigi Goode introduced the film. Megan Lawson, the co-director of live Madame X show  also said some words before the screening.

The movie began with a pre-recorded message from Madonna: “I want to be there with you,” she said “I’m so excited you’re seeing it finally. Madame X is giving birth. So…I hope you enjoy it. After 2-and-a-half years of making music, rehearsing the show, doing the show, editing the show, blood, sweat, tears, hard work, Madame X is finally being born. It’s coming to life. And I hope with all my heart that you enjoy it and that you have an exp experience that you’ll never forget and you walk out of this theater inspired.”

Madonna‘s “Madame X” film chronicles her worldwide Madame X Tour, which ran for 75 dates from 2019 to 2020. The film was supposedly shot in Lisbon, Portugal in 2020, but we saw snippets from all over the world including Los Angeles.

The film is directed by Nuno Xico and Sasha Kasiuha.

So what did this Madonna fan think of the finished product of the Paramount Plus Madame X film?

I really enjoyed it. I’m glad I got to see it on the big screen. The last time I saw a Madonna concert on the big screen was Truth or Dare, so last night was a real treat. I went to three Madame X shows in Los Angeles, so it was fun to revisit the music. My favorite live performances projected well into the streaming platform. From the opening of “God Control”, to the latest re-invention of “Vogue” to “I Don’t Search, I Find”, there is plenty to love from the start. 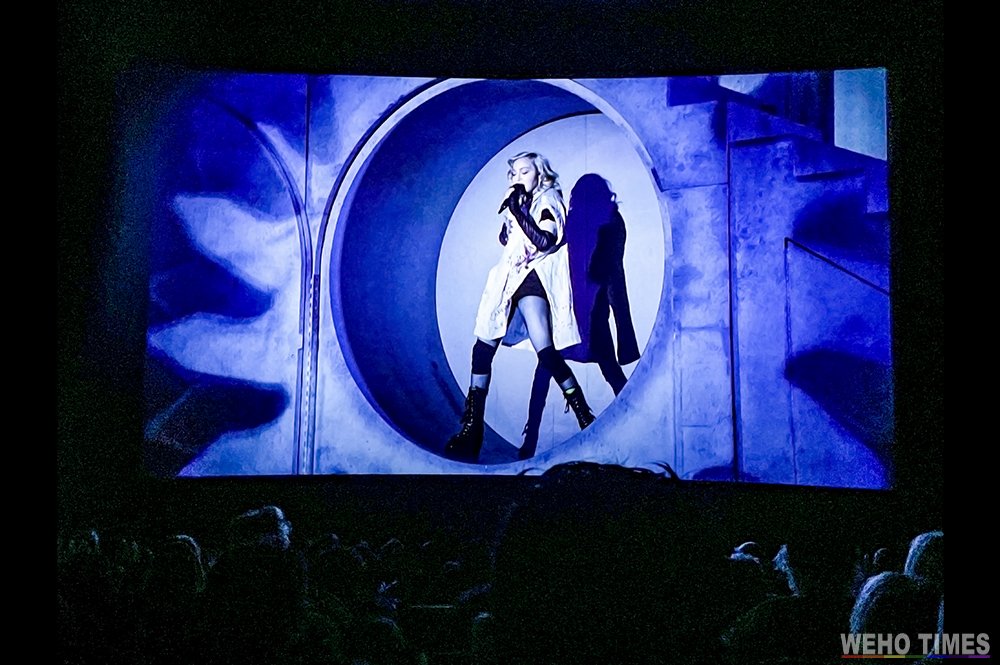 My favorite moments continue to be “Human Nature”, the “Rescue Me interlude”, “Frozen”, “Come Alive”, and the “Like a Prayer” song is probably her most performed piece, and it does not seem to get tired here after well over 30 years.

There was a lot of emphasis on Madame X concert being an intimate theater experience. Our phones were snatched and put on lockdown, but if you think you’re getting a theater experience with long continuous shots in the newly released movie, think again. The concert plays like a video game with two-second cuts from scene to scene. This concert format is the new normal, thanks largely to MTV.

Gone are the days when M performed live for HBO–“Madonna. Live. On HBO. You don’t know what she’s going to do. But you want to be there when she does it.” Or something like that. 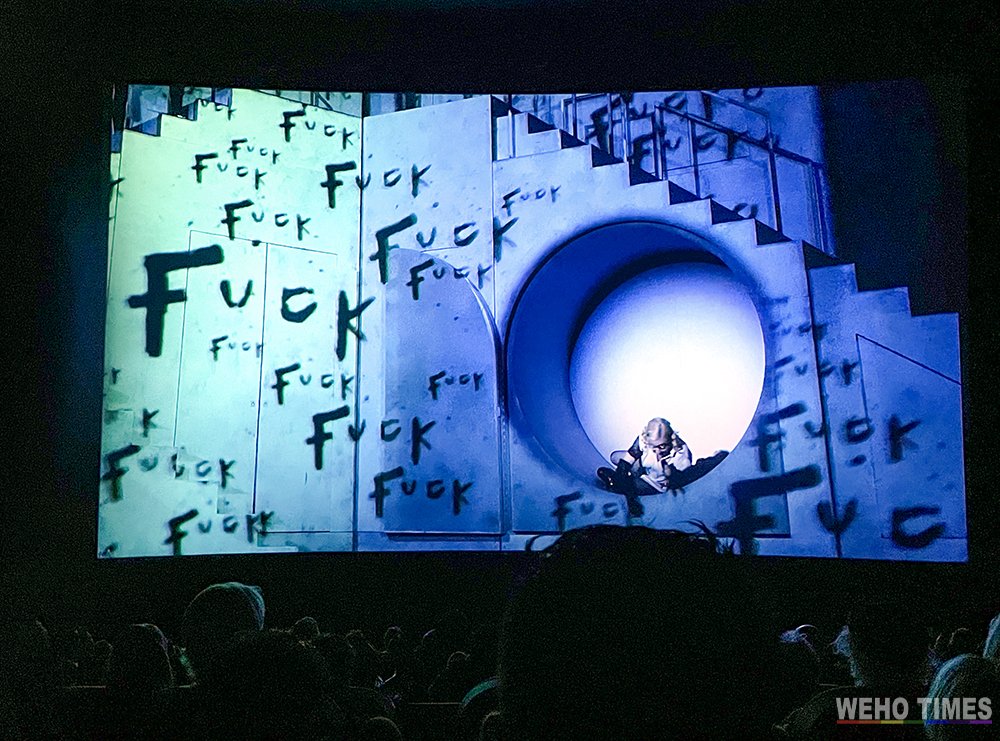 My only real beef with the movie is how M delivers when she says “None of this is real”. The inconsistent shots are distracting in the beginning. From the two-second frames to two-second frames, where she’s wearing an eye patch in one shot and then two seconds later the patch is gone, and then it’s back with a different hair style, and so on. There is absolutely no way this did not go unnoticed in the editing room, so it is interesting that the inconsistent cutouts made the final edit. 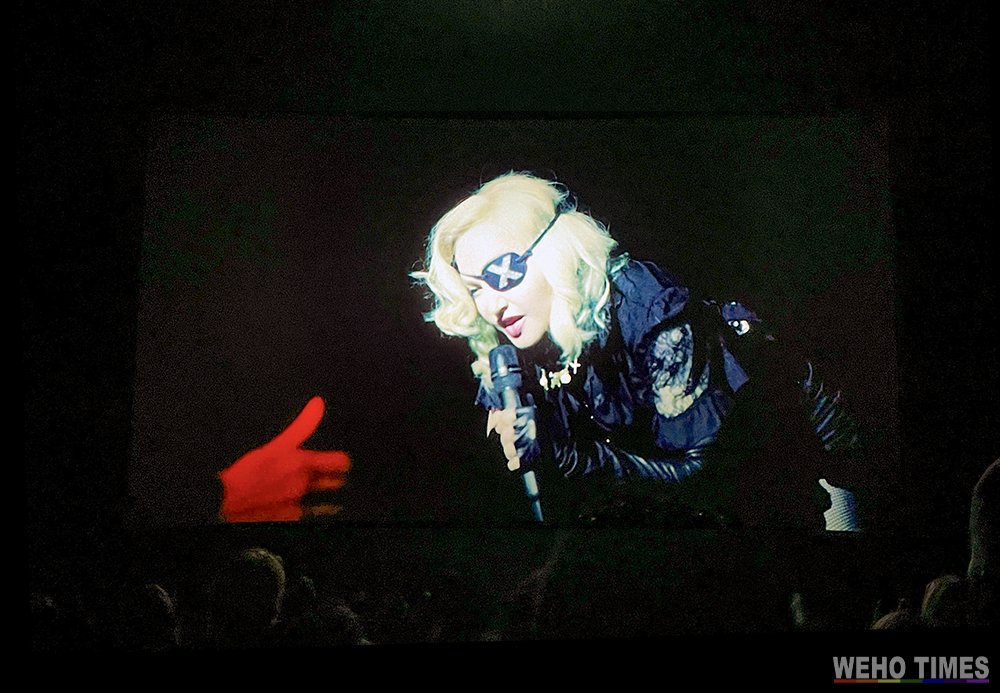 Madame X tackles serious issues via video montages that are in the background during the live performance, but brought to the forefront in the movie. The film highlighting the fight for LGBTQI rights, features women’s rights protests, Black Lives Matter demonstrations, forest fires, war and gun violence to name a few catastrophes plaguing the world that was on the brink of a COVID outbreak when Madonna was on the road (she allegedly got COVID on this tour, which forced her to cancel several shows).

There is an interesting snippet with none other than comedian Dave Chappelle who was Madonna’s beer bitch at the Lisbon show (at least we think it was Lisbon). Chappelle’s recently released comedy special “The Closer” on Netflix has been criticized as transphobic by the woke. Calls for his cancellation have sparked a debate about cancel culture, the meaning of comedy, lack of sensitivity, the overly sensitive and how people are just over the PC police.

In the Madame X film, Chapelle was out to inspire, rather than piss people off (or make people laugh), “I believe in God,” he said. “I believe all humanity is from a single source. I thank God everyday he made me talented so I could meet people like you… I believe all life has purpose. And I believe every human being is exactly where they’re supposed to be at all times.”

The Madame X Los Angeles screening was a much smaller affair than what Madonna did in New York (if we’re keeping score). New York queens got to see the film days before its official release date and Madonna actually performed at the Red Rooster with Jon Batiste and his band in Harlem, and then she took to the open street to sing “Like a Prayer.”

“We didn’t even get a movie poster at the venue,” I heard one Madonna fan complain while he held his free ticket into this special screening at a movie theater while others have no choice but to settle for their flat screen TVs in the comfort of their living rooms.

East-coast versus West-coast aside, the response to the movie was positive. People laughed, they sang, took photos and filmed performances and clapped excitedly during the rolling credits.

There was an after-party at Micky’s in WeHo, hosted by Symone and Gigi Goode along with the House of Avalon after the screening (photos to follow).

You can watch Madame X on Paramount Plus. Give it a try at: https://www.paramountplus.com/