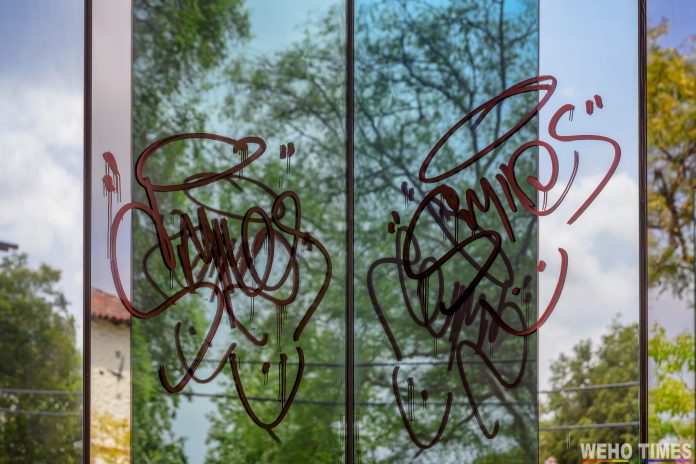 Parallel Perpendicular art installation by artist Phillip K. Smith III, was vandalized with graffiti this past weekend, either Saturday night, or Sunday morning. A tagger/or taggers scribbled on two of the installation’s mirror panels located in the center of the Robertson-adjacent portion of West Hollywood Park, next to the Abbey Food & Bar. Other parts of the West Hollywood Park were also tagged with the same markings. 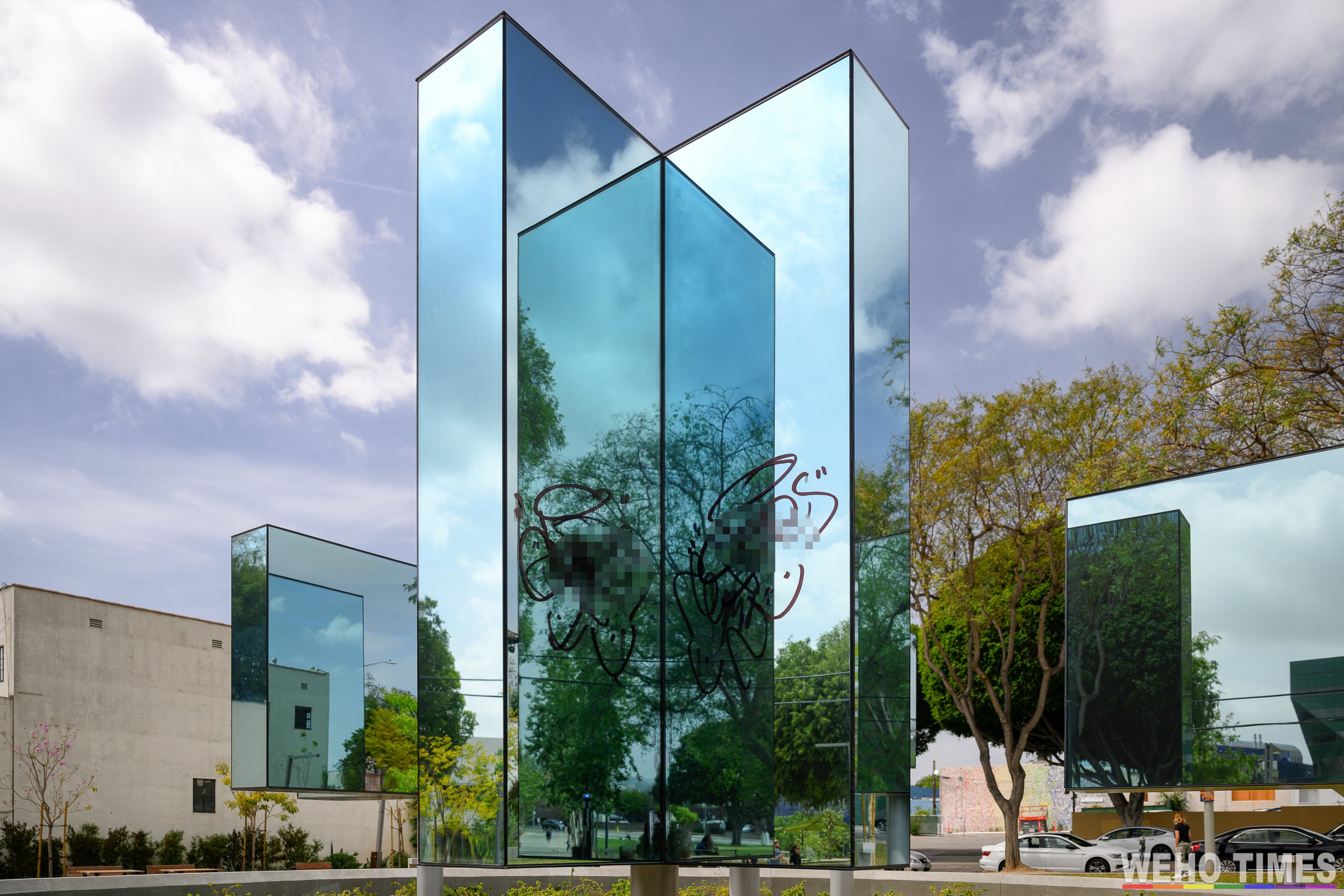 A West Hollywood city employee was seen removing the graffiti at various locations of the park on Sunday. He tried to pressure wash the walkway next to one of the dog parks, but was not able to remove it right away. 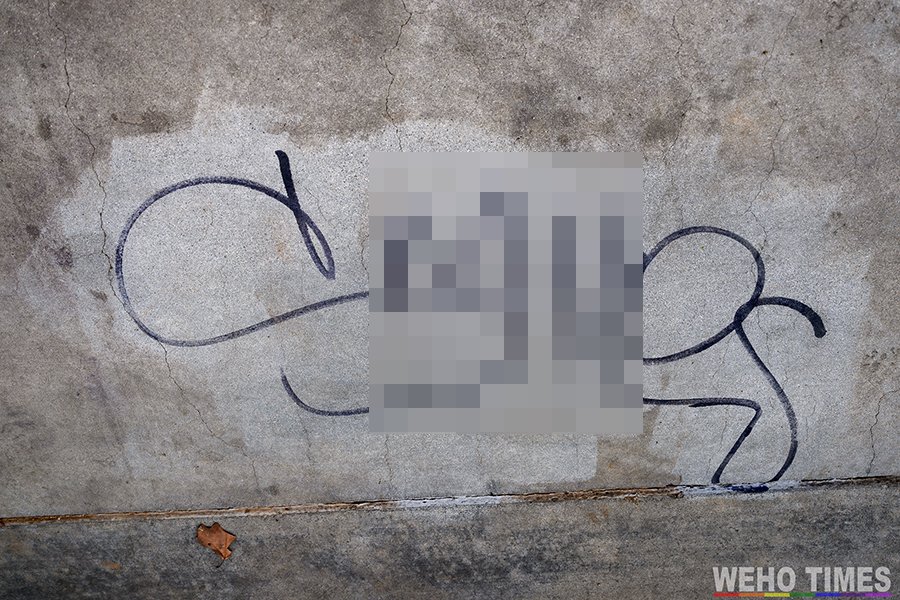 According to a source, he did not want to touch the Parallel Perpendicular art exhibit for fear of damaging the mirror panels. Someone specializing on cleaning the installation will have to try to remove the markings with caution.

Vandalism and graffiti are criminal offenses prohibited by section 594 of the California Penal Code. Most graffiti crimes are charged as misdemeanors. City graffiti ordinances typically penalize people convicted of vandalism or graffiti spraying with a fine, though other sentences such as community service, probation and even jail sentences are possible as well, depending on the value of the damage. 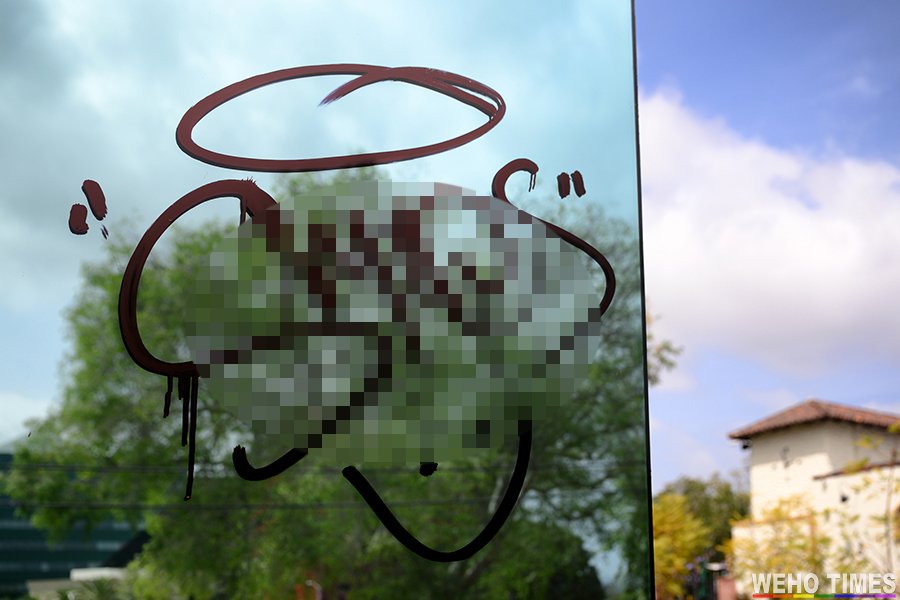 Graffiti placed on public and private property located in the City of West Hollywood is removed at no charge. Graffiti is generally removed within 3 days of notification and graffiti of a graphic or obscene manner is removed immediately. To report graffiti, you can call the City’s Graffiti Hotline at (323) 848-6557 or fill out a Service Request.

For additional information regarding the City’s graffiti removal services, call (323) 848-6879.

The Parallel Perpendicular art installation is comprised of five freestanding mirrored volumes composed of parallel and perpendicular planes hover above a 40-foot diameter circle of green landscaping. Parallel Perpendicular is meant to be an entirely interactive piece. By day, these forms reflect the park visitors and environment as well as the surrounding West Hollywood views. By night, the mirrored surfaces become pure fields of color that slowly move through the color spectrum. These colors reflect off each other, merging upon colors, creating new spaces of color, projection, and reflection.

Partner to prevent or report crime by contacting the West Hollywood station. Or, if you wish to remain anonymous, call “LA Crime Stoppers” by dialing 800-222-TIPS (8477), texting the letters TIPLA plus your tip to CRIMES (274637), or using the website http://lacrimestoppers.org/.

It would make sense to had designed the park and all its furnishing knowing this would be happening and make things easy to clean or very difficult for vandals to get to. The wood picnic tables are already deeply stained. Other parks use materials that will easily wash clean.

I knew this would happen. No good deed or artwork goes unpunished. I was assuming some drunk from the Abbey would smash it. Time will tell. 🙁