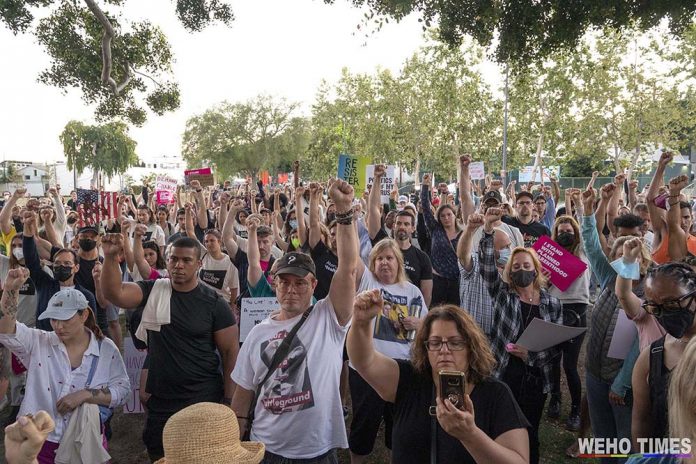 It was a billed as a candlelight vigil followed by a march, but the vigil was more of a loud rally cry protesting the Supreme Court’s opining to overturn Roe v Wade in West Hollywood Park, at 647 N. San Vicente Boulevard, on Friday, June 24, 2022, at 7:00 p.m. Hundreds of people gathered to listen to speeches by elected city officials and community leaders and march on Santa Monica Boulevard.

Pastor Dridie Roberts of Hollywood Methodist United Methodist Church began the event with a prayer and a moment of silence.

West Hollywood Mayor, Lauren Meister was the first to speak, “I can’t believe we have to protest this again,” she said. “Although I am not surprised, I am terribly disappointed–that’s an understatement; I’m enraged, mortified, that The Supreme Court would overturn a case that was decided decades ago, by its predecessors. Now we are forced to go back in time when women were second class citizens without the right to make personal choices about their own healthcare, their own bodies, or their own well-being. And this will not stop at abortion. Justice Thomas has given us a preview of his evil plans, from contraception, same sex relationships and marriage equality, so this must be a call to action. We succeeded in voting out Trump in November 2020, so I believe that there is hope that we can get rid of the rest of the misogynist bastards this November. In the meantime, we must support organizations like Planned Parenthood that assist women and trans men in giving them healthcare. We must support organizations like the ACLU who will fight for our rights… the city is committed to continue its efforts to vigorously defend women’s reproductive rights and access to healthcare. We are committed to lobby congress to respect our human rights, our civil rights, and our right to choose, and we need to make the right to choose, the law of the land.” 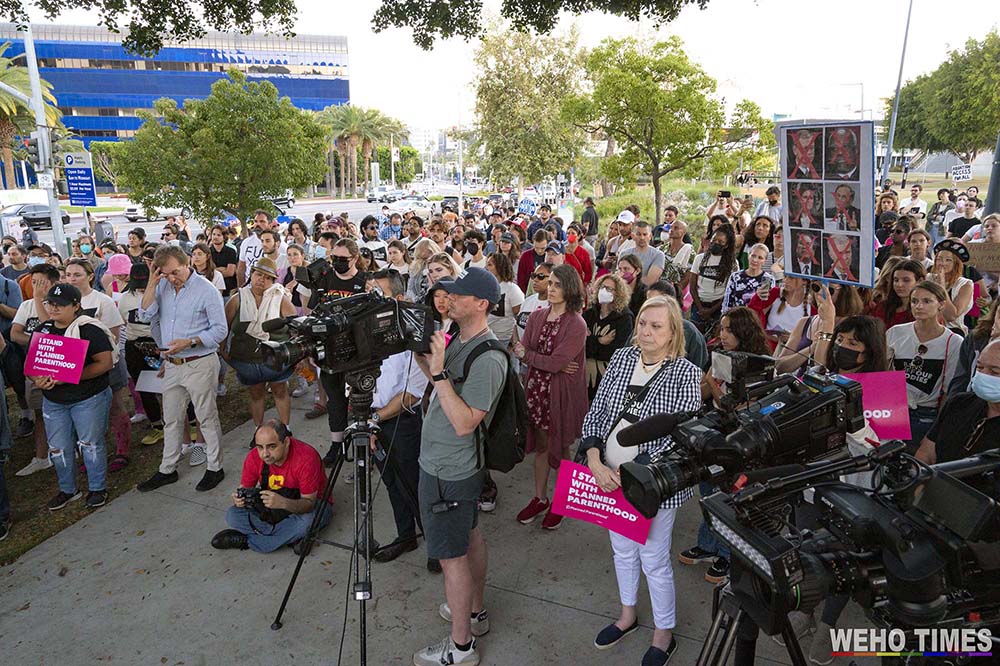 “Today my heart is broken and my emotion is full of rage, but my spirit is determined, said Mayor Pro Tem Sepi Shyne. “Today, the far right wing of the Supreme Court of the United States of America just broke this country in half by reversing 50 years of reproductive rights for women and transgender men.”

The Mayor Pro Tem told the crowd that the far right wing of the Supreme Court took individual choice for more than half of the population of our country and gave a message to women, little girls, trans men, victims of incest and victims of rape that your lives don’t matter while giving Americans where mass shootings are epidemic, more rights to carry concealed handguns. 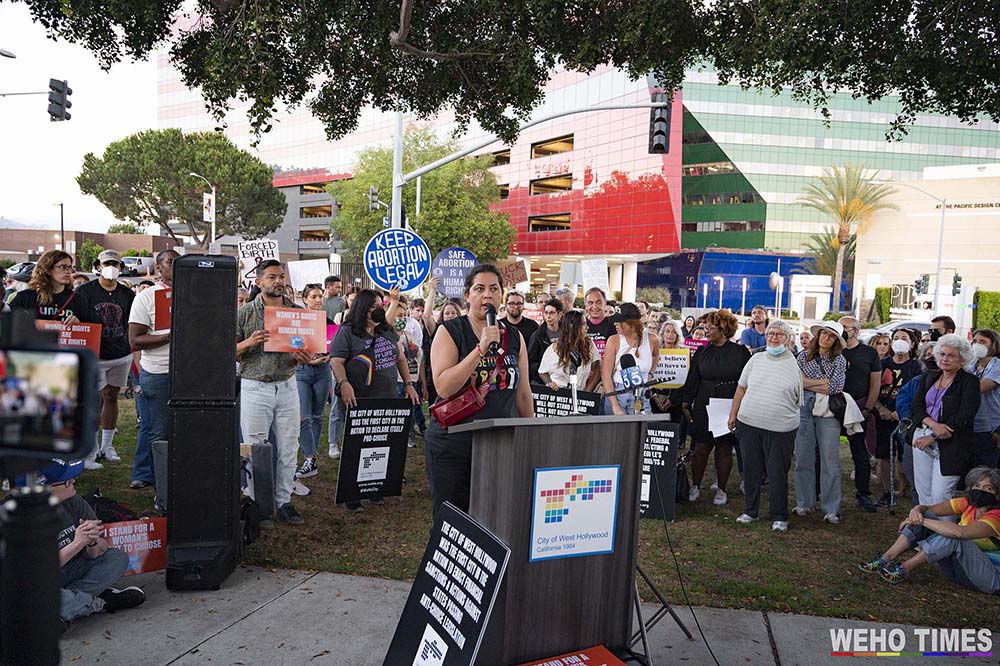 Other speakers of note included Shanon Morton, a member of the West Hollywood Social Justice Task Force and President and founder of Black Women Lead:

“Let’s be clear, reproductive rights are LGBTQ rights,” said Jackie Steele. “Does anyone here not think marriage equality is next, show of hands? I didn’t think so. This is all about our fight. Interracial marriage is on the table. Everything is on the table, but spoil alert: nothing about that has changed. We never had equity in this country. Period. When women gained the right to vote, it was white women. When we had advances in healthcare, it was those with the most privilege first and always, too often leaving others behind. If we’re not talking about access for trans men, we’re not getting it. If we’re not talking about the abominable way the healthcare system treats black women to this day, we’re not getting it. We have to create an existence that is equitable for all of us.” 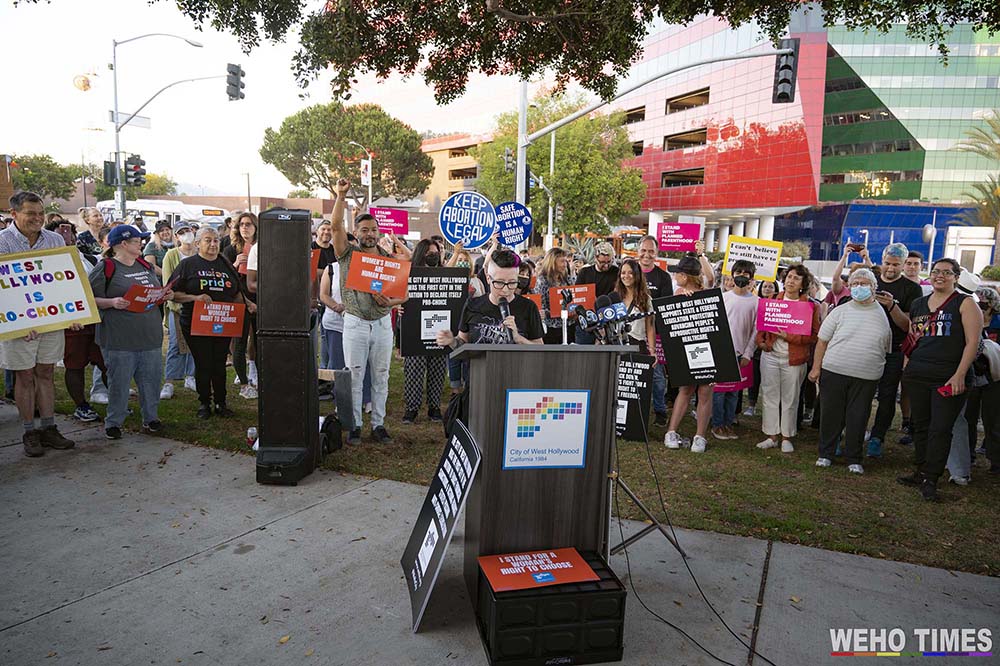 Activist and actress Michelle Clunie spoke of the hardships of mother and admitted that she has had two abortions, one when she was 23, and one when she was 29 from a sexual assault. “I’ve been a mother for seven years and it is the hardest thing I have ever done,” she said. “It is the biggest choice you will ever make in your entire life. When people say to me, ‘that’s a tough job,’ it’s not a f*cking job. Let me tell you, there are no days off. I don’t get to call in a personal day because I have a tummy ache or I have a pimple. If I have the flu and he has the flu, I’m taking care of both of us until four in the morning…that is what you sign up for when you become a mother and it is hard even under great circumstances… it is not a choice to be taken lightly.” 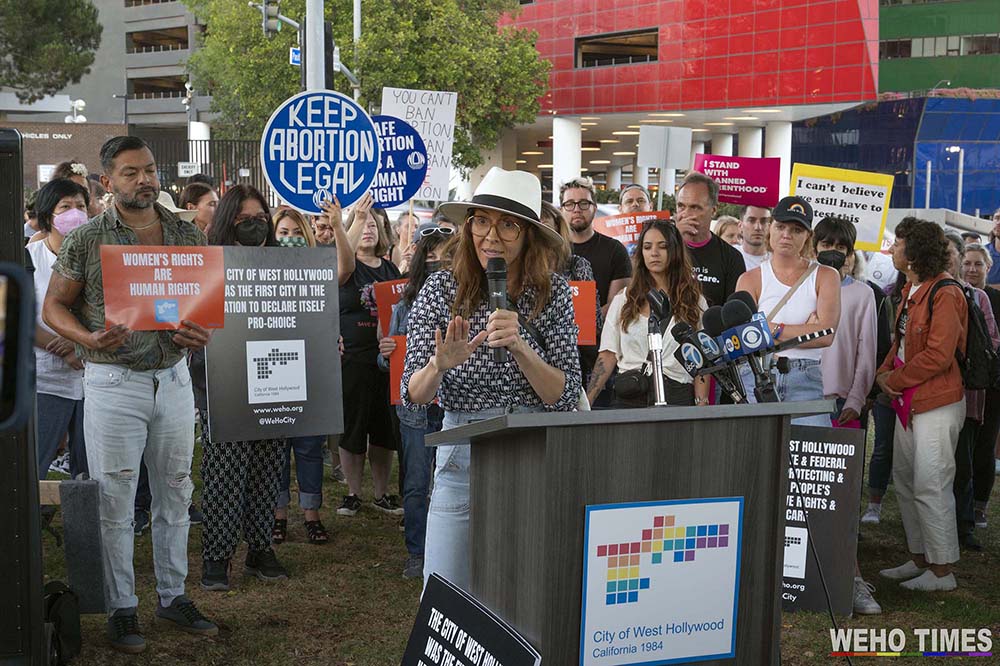 The vigil went for roughly one hour and 20 minutes, followed by a march.

People cheered, held signage and they chanted: “Abort the Court!” “The people united will never be devided!” “Terrence Thomas is a c*nt!” “Abortion is our right! We won’t give up our fight!”

The City of West Hollywood regularly monitors policies and proposals that impact West Hollywood’s residents, including women, LGBTQ residents, people with disabilities, seniors, people of color, and immigrants, among others, and the City will continue to be a champion and defender of health equity and reproductive freedom.

For more information, please contact Hernán Molina, the City of West Hollywood’s Governmental Affairs Liaison, at (323) 848-6364 or at hmolina@weho.org

Even Justice Ginsburg thought Roe v. Wade was flawed. Hopefully a new case will once again challenge this standing.